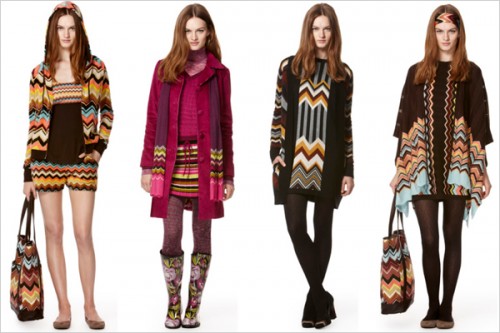 The highly anticipated Missoni for Target collection which was intended to be a six week promotion of 400 items in limited stock, sold out in one day. This strikes me as a skewed collective response, especially in this economy. It was also reported that some shoppers were looking to profit from the hype, getting in the doors early and then listing sold out items on eBay the same day.

Four months later there are still over 8,000 listings available on eBay in case you feel you missed out, and the inflated prices have come down to a reasonable level. There are even items still available on Target’s website, which crashed on September 13th from all the traffic.

Missoni is a family-run fashion house started in 1953, known for its colorful, patterned knitwear. Prices for their current resort wear collection, at least what’s available on Net-a-porter, range from $405 for a crochet bikini to $2,125 for a strapless floor length crochet dress.

For the Target collection they slapped their famous chevron patterned stripes on everything from pencils and teacups to bikes and furniture. It was heralded as Target’s largest limited-time designer collection to date with items priced $2.99 to $599.99, but we all know what sold out first: the clothing line. Wouldn’t you want to own a designer garment for a Target price?

Target has been collaborating with high end designers for years starting in 2005 with Isaac Mizrahi, but in the early days there was no commercial hype or threat of “limited” quantities. That’s where it gets weird and a little manipulative. The business plan behind the limited quantity is basic supply and demand. If the items sell out for full price, that’s a victory in retail. Most of the big box retail stores will sell a percentage of new items at full price, then as they sit on the shelves they get marked down eventually ending up on the clearance racks selling for 75% off the original price. Too much supply means dwindling demand.

I wasn’t there for the Target launch. I looked at the clothing online and although it was striking and very Missoni-like, I’m not a huge fan of putting stripes on my body, so I knew I wouldn’t wear it. It isn’t really a look I can pull off. Never one to shy away from a challenge, however, I’ll be lining up early on Sunday, February 5th for the Jason Wu/Target collaboration launch. From what I’ve seen online, the collection is a bit sweet, but definitely wearable.

The blue dress with the sheer top has a silhouette similar to the Rachel Roy collection sold through Macy’s, which is my all-time-favorite-go-to-designer-but-affordable clothing line.

I’ve also heard that the line will only be carried at the Target stores in the suburbs of Seattle, which is pretty convenient for this suburban housewife. I’m hoping that the residents of Everett, Washington are not familiar with Wu and that I can walk through the doors calmly without the proverbial elbow throwing. I’ll report back.