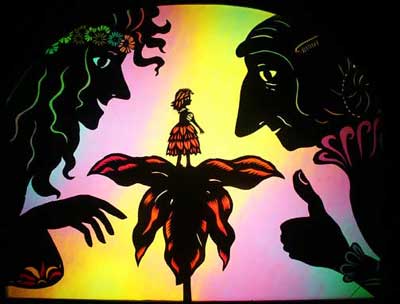 Rolling right along with January, this weekend brings us the kind of theatrical variety platter that makes us the envy of the West Coast: A world premiere by one company, another up North, fourteen from a different company, the return of a Northwest puppet staple, some semi-absurdist silliness, and a staged reading on Monday, why not?

Let us begin with our neighbors up in Edmonds, where the town’s Driftwood Players are hosting the world premiere of The Peregrine Sonata as part of their Alternative Stages program. Peregrine, local playwright Amanda Aikman’s latest, is three interwoven plays about five women (a bike messenger, a composer, two war correspondents and a physician) attempt to make an impact on their world through their individual works and passions. The production features a number of familiar Seattle faces and is directed by the Schmee’s Doug Staley.

Over in Capitol Hill, the Washington Ensemble Theater is holding their own world premiere production of The Callers, a new musical by Ali el-Gasseir and Ella Dorband about…well, it’s about…These people, who call looking for…phone sex and phone psychics and advice. It’s set in 1997. It’s WET’s first musical…Here, watch their trailer, it should clear everything up.

The Callers! from Washington Ensemble Theatre on Vimeo.

Yup, couldn’t be clearer. It’s about Viktor, avoiding charlatans, and believing in the spirits down to your core, because then you’ll soar.

If you find yourself in charge of pint-sized little monsters over the weekend, whether they are your own or those of some random family member for whom you are babysitting, you might consider introducing them to the world of Hans Christian Andersen’s Thumbelina, which is being presented at the Northwest Puppet Center. A shadow play (like Scot Auguston’s Shadow Oddyssey, except for kids), Thumbelina is the work of the Oregon Shadow Theater, whose artistic design is centered around a colorful Art Nouveau motif, which will dazzle both moppets and adult supervisors alike.

Adults seeking to be dazzled by something every bit as colorful and as whimsical but a bit more illogical, should head to Re-bar, where Le Frenchword will take up residence for a couple of weeks with their Fancy Mud before heading off to tour the Canadian Fringe Festival circuit later this Summer. This production features more material than was used during the group’s workshop production at Annex last September, about which our own John Allis said, “I haven’t seen anything this deeply, unapologetically off-the-wall in this city in a while;” fans of light absurdism take note.

Of course, the 500 pound gorilla in the room is none other than the second weekend of 14/48, who’ve been just about everywhere during the first weekend. By now, you’ve likely heard the spiel: 7 playwrights, 7 directors, 27 actors, a live band, design crew, get together to create 14 new plays in 48 hours. This weekend we’ll see the talents of an impossible array of talents (Sean Nelson, Wayne Rawley, Pattie Miles Van Beuzekom, Paul Budraitis, Nik Perleros, Nick Stokes, Louis Broome, just to name a few), and once again, the Seattle Star will have a heavy contingent present during the proceedings: Omar Willey on pictures, John Allis on blog duties, and some other shmoe doing something or other.

Our last event for the week takes place on Monday, at the Seattle Center House theater; the Endangered Species Project kicks off their 2012 season with Philip Barry’s 1928 play Holiday. Barry is better known as the writer behind the 1940s comedy classic The Philadelphia Story, which has come to overshadow his other written works, including this romantic comedy set in the boom times before the 1929 Stock Market Crash. Fittingly, money, greed and ambition are at the center of Holiday along with a light exploration of the social strata to be found among the upper classes. This staged reading is directed by Mark Anders and features the acting talents of John Aylward, Shawn Law, Chris Ensweiler and Amy Love.