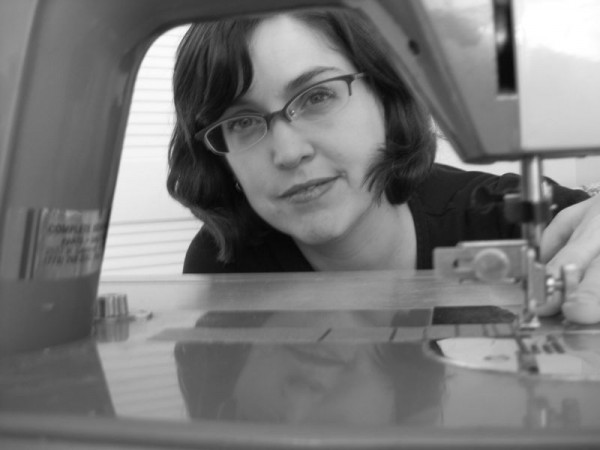 Erin McKean is an American Lexicographer. It says so right there on her Wikipedia profile. She is the author of several word-focused books and sits on the advisory board of Wikipedia. It was only a matter of time before she created some new way of looking at language, having also served as the Principal Editor of The New Oxford American Dictionary, second edition. Is it just me, or did anyone else imagine that the person squinting at and editing THE DICTIONARY was some old guy with ear hair and bifocals?

Lexicography is her day job, but sewing is her passion.

Wordnik is the first word navigation system that helps people unlock the value of words and phrases to discover what information is most meaningful and matters to them. Wordnik goes beyond traditional dictionary definitions to deliver words in context.

I’ve been searching my whole life for context.

Wordnik.com is an online dictionary and language resource that provides dictionary and thesaurus content, some of it based on print dictionaries such as the Century Dictionary, the American Heritage Dictionary, WordNet, and GCIDE. Wordnik has collected a corpus of billions of words which it uses to display example sentences, allowing it to provide information on a much larger set of words than a typical dictionary.

This girl has got it bad for words. My vocabulary is already feeling intimidated.

Just to give you an idea of the flavor of the site, I typed my first name into the search box on the home page at Wordnik.com and following a definition, this example sentence popped up:

As he watches Tina continue to get sliced up, their friends Nancy and Glen — sleeping elsewhere in the house and separately – hear the screams, but are unable to get into the room until Tina is already dead.

In addition to wielding a razor-sharp turn of phrase, in her spare time she writes a sewing blog chronicled at A Dress A Day. I’ve been following her fashion adventures for years, but had no idea she was such a wordsmith. Combine her love of sewing with a rich linguistic arsenal and you get The Secret Lives of Dresses. The book started as a series on her blog and was compiled and published in 2011 as a work of fiction. Among other things, The Secret Lives of Dresses has been called a retro coming of age novel, a tale about embracing who you are, and a story of finding one’s identity by examining the power of clothing to change lives. You can read the very first entry on her blog, here.

Erin graciously agreed to answer a few of my burning questions around the subject of her two interests, words and sewing:

Erin M: Definitely words. I fell in love with words at age 8, but I was a big tomboy until I was about 12 (when I started sewing).

Erin M: Lexicography is my day job. I think my friends would say my superpower is making analogies.

Tina W: Where did the idea come from that dresses have a secret life?

Erin M: I was up late one night thinking about what to blog about the next day, and just thought “what about writing from the perspective of a dress?” I wrote it up and posted it quickly before I could chicken out, and then people seemed to like them!

Tina W: I understand that Wordnik can give aspiring fashionistas enough fodder for dinner party reparteé with Anna Wintour. If you saw her at a cocktail party, what would you say to her?

Erin M: I think I would tell her how much I enjoy the “Nostalgia” column in VOGUE — clothing and fashion can be so evocative and hold so many memories. It’s great to have a place for reflection in an industry that is so focused on the next and the new.

Tina W: What do you hope to contribute to language through Wordnik?

Erin M: With Wordnik we want to map the whole language, so that we can help people discover all the words that they need and all the ideas that that are interesting and relevant to them. Every word deserves to be understood …