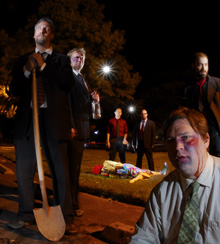 Once again, Wing-It Productions will be bringing the funny next month with the 10th Annual Seattle Festival of Improv Theater(SFIT), which brings together talented improvisors and production companies from all over the world. The weekend-long festival gives audiences the chance to compare and contrast different improv styles, forms, and above all else, bust a serious gut.

This year’s line up for SFIT will include world-class performances from the following improv groups:

Festivities begin Wednesday, February 15 and run through Sunday, February 19. There are two theatre locations (Wing-It/Jet City Theater and the Ethnic Cultural Theatre) where you can catch performances by the above-mentioned troupes, and a preliminary schedule has been announced for location and times shows will take place. Here’s where you can catch the performances:

Tickets are available for purchase at the Seattle Festival of Improv Theater website and are $18 for adults, $15 for students / seniors / military, and $50 for a full festival pass.

Our personal recommendation would be, if you haven’t experienced an improv show by some of the local groups, try and catch at least one of those performances. But where it’s really at for this particular festival is the out-of-town troupes that you wouldn’t normally have a chance to see perform otherwise. Either way, make it out to the festival on one or two (or all!) of the nights for a rip-roarin’ good time. Oh, and, bring a change of pants, just in case…