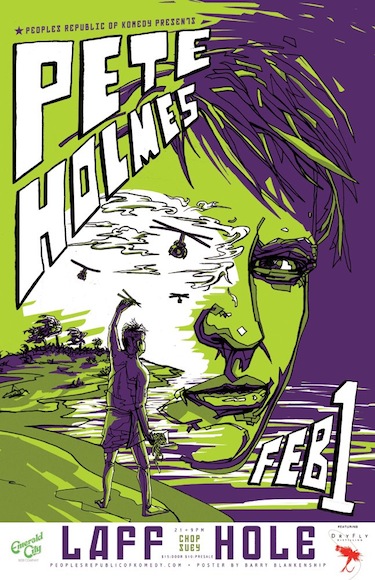 Pete Holmes is not a baby, but he plays one on TV. More specifically, he is the *E Trade Baby (or rather the voice behind said baby) – that snarky, worldly, little tot we all know and love, who helps us with our day trading -mostly from the comfort of his high chair.

Pete Holmes’s comedy is equally endearing, and a little snarky as well, but he never seems to stray anywhere too offensive while still keeping that edge, much like his pre-toddler counterpart.

I really enjoyed his bit on Conan about how we have lost our inquisitive nature with the advent of Google and how he misses not knowing things, while lamenting the ease of finding out information. As he so eloquently put it, we no longer get to be “impregnated with wonder.”

He (Pete, not the baby) will be featured at Laff Hole this week which will also feature the awesome local comedic talents of Brett Hamil, Jessica Strauss and Troy Mink.

Laff Hole, which is produced by the excellent Peoples Republic of Komedy at Chop Suey every first and third Wednesdays of the month at 9pm, is a great showcase for big name comedians and local talent as well. Past headliners have included John Keister, Andy Kindler, Nick Thune, and Tig Nataro, with drop-in performances from the likes of Eddie Pepitone and Robin Williams. Pepitone, widely thought to be the “Elder Statesman” of alternative comedy (Patton Oswalt is said to be a fan), will be headlining again on March 21st.

See Laff Hole every first and third Wednesdays of the month at 9pm. Tickets are $10 in advance at the Chop Suey box office or online at www.ticketweb.com , or $15 at the door the day of the show. Go to their website for a full calendar of events.