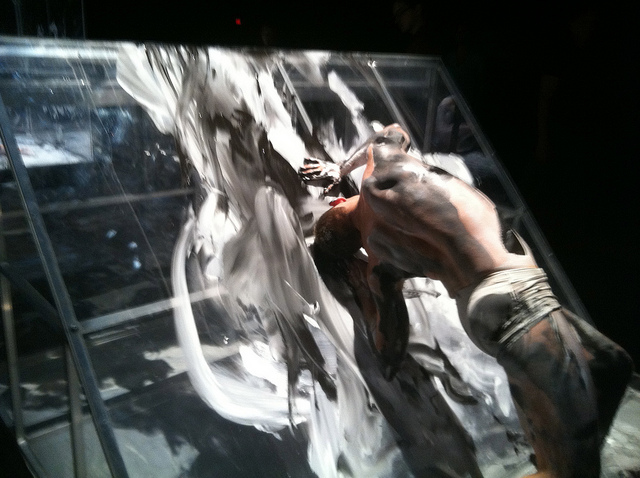 If you watched the opening ceremonies for the 2008 Beijing Olympics, you’ve seen the work of Shen Wei. After leaving China’s historic Guangdong Modern Dance Company, Shen Wei has settled with his Shen Wei Dance Arts company in New York where they have just celebrated their tenth anniversary.

Dance is largely about space. Much of classical dance deals with space two-dimensionally: the clear, long visual lines created are as brush strokes on a flat canvas facing the audience. It is all so clean, so elegant, so refined, like white sugar.

By contrast, Shen Wei’s choreography treats a fractal space somewhere in between two and three dimensions. Gone is the neat proscenium arch. Instead of the flat canvas facing the audience, the canvas has moved instead to the floor. The lines are no longer clear, long and obvious. Instead they take on a character quite sudden, brief, explosive. Dancers dip their limbs and sometimes whole bodies into paint and leave trace their movements upon the floor canvas beneath them.

Those familiar with Western art might draw an analogy here with Action Painting. An equally valid and probably more accurate analogy here would be with the spilled ink paintings of Chinese Taoist and Ch’an painters such as Ying Yu-chien.

In their new touring work, Limited States, Shen Wei Dance Arts have shrunk the canvas, so to speak. The work deals not just with limited states but also with limited space. Dancers stand in tight queues, no space between them, like cogs of a large machine. Small blocks of light, not more than six feet square, contain multiple bodies that try to escape into the larger space of the stage. Video projections freeze dancers’ bodies and movements against a gridlike wall. But then the limitations themselves combine to become extremely intricate. Light squares multiply. Grids overlap. Paths cross. Interactions between the limitations become the essence of the piece.

Shen Wei of course continues his fascination with the connection between painting and dance with solo dancers who use their bodies as brushes, though here Shen Wei moves progressively from his usual monochrome to a wider range of color. It is a lovely and provocative piece that Seattle is fortunate to host.

Part of the brilliant UW World Series of Music and Dance, Shen Wei Dance Arts has been hailed as “startlingly imaginative performance for forward-looking audiences.” Test the superlatives out for yourselves. It’s been awhile since Shen Wei Dance Arts brought their Rite of Spring and the beautiful Folding to the Meany, so it is nice to have them back.