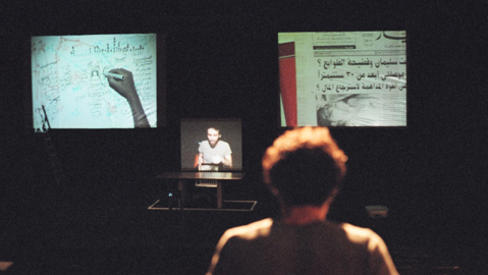 Courtesy On the Boards

Here’s what nobody’s saying regarding the glorious aspect of the “Snow in Seattle” phenomenon: It just takes some warm wind and rain, and it melts faster than anything…In the meantime, we have a bunch of cars with California plates driving like black ice is a figment of somebody else’s imagination, and theater companies are deciding what to do with the shows that are set to open this weekend. Already we’ve seen one opening pushed back a week, and a couple of others making adjustments. We’ll keep you posted.

In the meantime, here’s what’s on offer once the roadways are clear, or you decide to take in something within walking distance, and companies are ready to go:

It seems our theater companies are fixated on one of three forms of “classic” text: adaptations of Greek theater, turn-of-the-20th-Century-English-speaking-playwrights, or German expressionism. Macha Monkey, whose adaptation of Elektra served them well last year, return to the Greek-theme with this weekend’s entry of Thebes, which is being presented at Theater Off Jackson. Written by Elektra‘s Kristina Sutherland, this world premiere play is about a woman running for mayor of the city where so many events in Greek mythology take place, and how she contends with her daughter, who just returned home from war. Seeing how nimbly this company has dealt with this general source in the past, and the talents involved both behind the scenes and on it, this production has more than a little promise going for them.

Along with their first billed musical, (The Callers, which is running through February 6) the folks at Washington Ensemble Theater continue breaking their own mold by offering their first piece of children’s theater: Ali El-Gasseir and Jonah Von Spreecken’s Urban Tanuki Samurai. About two kids who face off in epic battles amid the trash in their midst, the scale of their imaginative duels continues to grow as both wish to avoid the chore of taking the garbage out. Both the title and the production’s artwork seem inspired by Saturday morning Anime cartoons, this could be a fun romp for kids and adults alike.

Let’s take a quick jaunt over to Queen Anne, where On the Boards are bringing us the next artist in their Inter/National series, Rabih Mroué, who is presenting two works this weekend. Up first is his Looking for a missing employee (originally slated to perform on Thursday night; an additional performance to take place on Saturday afternoon at 4:00p.m. has been scheduled). Looking details the artist’s darkly comedic search for a civil servant who has disappeared as he traverses a terrain filled with innuendo, propaganda, and other media obfuscation found in Lebanese culture. Then on Sunday, Mroué presents The Pixelated Revolution, a work in progress in which he dissects the smart phone and the role the instrument had during the recent spate of protests in the Middle East.

David Schmader’s history in Seattle extends much further back than his stint as a contributor and editor at The Stranger, further still than his popular dissertation on Paul Verhoeven’s Showgirls. No, Schmader first made an impact on the Seattle landscape in the early 90s with his first solo show, Letter to Axl, one of the first pieces of theater to tackle the pernicious atmosphere of homophobia — as represented by the lead singer of Guns ‘N’ Roses — head on. Since that time, Schmader has utilized his trenchant wit to address several topics that affect his world view, ranging from simple pride to conversion therapy with regular digressions to everything in between. His latest solo work, A Short-Term Solution to a Long-Term Problem, commissioned by the Richard Hugo House and directed by Matthew Richter, will discuss matters of matrimony, Mormonism — among other issues — in a way that will make you laugh loud and often, if past productions are anything to go by.

Staying on Capitol Hill for the moment, let’s take a second to take in Theater Schmeater’s latest offering, Cradle and All, a new two-hander (a play that requires only two actors) comedy featuring the talented and amiable Matthew Middleton and Alyson Bedford. The play’s description (“A look at how two urban couples [read – yuppy, not street] react to a crying baby.”) makes this sound like a safe evening out — what is there to be said about this topic that hasn’t been explored already? But, this cast, and the production’s director, J.D. Lloyd (director of Reservoir Dolls and the Schmee’s Artistic Director) are enough to suspend any hesitancy we might feel about going to see this play. Their past work merits at least a look.

Finally, out in West Seattle, ArtsWest brings us the Seattle premiere of Shirley Lauro’s All Through The Night. Based on interviews the playwright held with women who grew up in Hitler’s Germany, the play delves into the lives of four Gentile women from the lower to upper classes and the different ways they juggle their aspirations and everyday desires while living under a fascist regime. A look at the exigencies of war seen through the eyes of the aggressor’s citizenry.