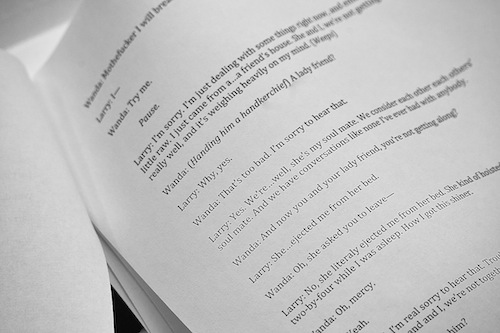 Setting: NANCE and BARB at the water cooler. They stand straight out at the audience. Nance wears a terrible powder blue suit. It’s ill-fitting and strangely sad. She eats her jelly donut with both hands. There is a run in her stockings. Barb has a round helmet of hair like a politician’s wife. She wears a pantsuit, circa 1984. Shoulder pads. Sneakers. Her coffee cup has lipstick smeared everywhere, even in places her mouth has no reason to be. There is a moment of silence.

Barb: Did you see Theodore from the eighth floor this morning? He ate every single glazed donut. Those donuts are for everyone. It just steams me, Nance. I’ll tell you. There’s something wrong with him. Why does he wear that eye patch? I don’t think there’s anything wrong with his eye under there. Somebody’s got to do something about those donuts.

Nance: Yeah. (She takes a bite from her jelly donut. It squirts.)

Nance: He doesn’t make any noise.

Nance: He breathes quick like a rabbit. He just lays there. I had to do everything.

Barb: Imagine that. Well, I’ll be a monkey’s uncle, Nance. He’s the boss. He could fire you.

Nance: That whole report has to be double spaced.

Barb: I know. I stapled it.

Barb: You can’t eat more than two of those logs. They’ll give you the trots.

Nance: Bob comes out to turn up the Muzak. We get to talking about beheadings. One thing leads to another, next thing you know, there I am, at his place doing it. He’s got a crooked wang.

Nance: He has motivational plaques above his headboard. There’s an oil painting of Stalin in his hallway. There’s nothing in his refrigerator but five bottles of mayonnaise.

Barb: Is that a hickey on your arm? (She looks at her arms in alarm. It is indeed a hickey.)

Nance: Oh crap. I think Bob’s embezzling from the company. He has office supplies in his oven.

Barb: Have you seen him this morning?

Nance: Oh you! Oh, Barb, you don’t know what it’s like. All day in the cubicle. All night alone in my duplex watching Lifetime original movies.

Nance: Me too. I’m just not lucky like you. I didn’t marry my high school sweetheart. I’m easy prey. I’m a lamb to the slaughter.

Barb: We rent out the basement to that hippie. He never takes out his trash. It just piles up down there. He smokes the weed. Sits in garbage. One night Stan was out with the boys, shopping for power mowers and I went down there. I took off all my clothes. The hippie was already naked except for his hat made out of hemp. I smoked some of his pot or acid. I don’t know. It was drugs.

Barb: I know, Nance. I know. I was playing with fire. I could’ve been burnt up. The hippie told me about love and harmony and peace and truth. I sat there naked in the trash for hours. I must’ve passed out. I woke up and the hippie was gone. He never came back.

Barb: Except he stole my purse and our car. Stan came home with a new power mower. Now I take pills.

(BOB MEYERS, the boss, enters whistling, with a muffin.)

Bob: Good morning, ladies. Barb, those sneakers bring out your eyes. Think this thought team, “Until you spread your wings, you have no idea how far you can fly.” Chew on that. Nance, I’ll need you in my office ASAP.

Nance: You bet, Bob. Be there with bells on.

(Nance and Barb exit together, whispering and giggling. THEODORE crawls out from under the table.  He wears a suit several sizes too small and an eye patch.)

Bob: (drops his muffin) Theodore, what are you doing hiding under the table?

Theodore:  (picks the muffin off the floor) I wasn’t hiding Mr. Meyers, there was a muffin down here. I was getting this muffin.

Bob: Shouldn’t you be collating?

Theodore: I’ve been collating since seven, sir. I can do other things besides collate, Mr. Meyers. I can double-space and paper clip. I have a certificate in stapling.

Bob: I hired you for collating, Theodore. In this company every worker is a spoke in the wheel. Help us roll forward.

Theodore: Under the table, it’s dark. It reminds me of childhood. I’ve always liked the liked dark places.

Bob: Can I have my muffin back?

Theodore: I found this muffin under the table.

Bob: Theodore, this is a corporation based on cooperation. You understand? Here at Technology Management Systems Corp we make connections, we build teams, we create community.

Theodore: I’ve been thinking Mr. Meyers, while I was under the table I did some thinking. Are you stealing office supplies?

Bob: I won’t stand here and be accused.

Theodore: You could sit down. No one’s stopping you. You ever play strip poker with a serial killer?

Theodore: I lost my eye in a poker game with the Boston Strangler. He’s not all bad. He knits.

Bob: I think you should go back to your cubicle.

Theodore: I have a switchblade in my underwear. Under the elastic.

Bob: Are you threatening me? (Theodore takes out the switchblade but just holds it.)

Theodore: It sure is a complicated world, Mr. Meyers. There’s hardly anything to hang onto these days. War and famine and and plagues of locusts and no carbs and reality tv and Republican punk rock bands .The whole world’s gone inside out and all its guts are spilling. Everything is lies and secrets. All I ever wanted my whole life was to come to the big city and staple in a cubicle. But somehow the more I see, the more hollow it all seems. All those glittery dreams. How’s a boy like me supposed to untangle it all, Mr. Meyers? I’m just a farm boy. I was brought up natural. Nursed until I was nine. Married my Aunt Boo. She’s dead now. Eaten by wild dogs.

(Barb and Nance enter. Barb’s carrying a stapler. Nance has a bottle of white out and paper clips. They stop abruptly.)

Barb: Is that a knife?

Nance: What are you doing with Bob’s muffin?

Bob: He was spying on us under the table. He’s trying to kill me.

Theodore: I don’t want to kill you, Mr. Meyers. I just wanted some answers. You’re the boss, after all.

Bob: (sobbing a little) He stole my muffin.

Barb: You dick. What did you hear?

Nance: Shut it. Or I will make you.

Theodore: I don’t mean anything by it. I fucked a hippie once. In the back of a greyhound bus.

(Nance hits him hard with a stapler. Theodore goes down. Barb joins in with her coffee mug. Bob uses his teeth. Blackout. Upsetting music. The sound of staples and screaming. When the lights return to normal, blood is everywhere. Theodore is dead with a stapler lesion through his heart. Paper clips are everywhere. Bob and Nance and Barb look disheveled and dirty. Theodore still holds the muffin.)

Nance: He asked for it. I don’t feel bad.

Barb: Put him under the table. (Gesturing to the puddle of blood.) That just looks like jelly. It’ll seem like an accident.

(Bob turns to her. Slow romantic fade as their hands meet. Blackout.)

Thanks to Kelleen Conway Blanchard