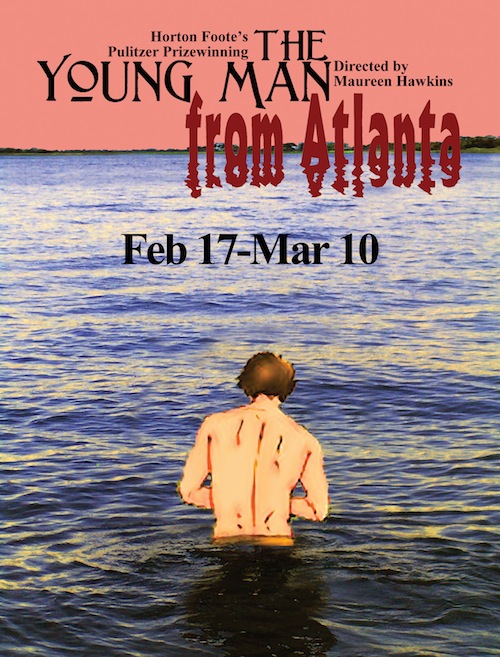 As the tastemakers of Hollywood return to the hills, having indicated and celebrated ‘our best work’ on Sunday, let us consider an acclaimed play by two-time-Academy-Award-winning playwright/screenwriter, Horton Foote (screenplays: To Kill a Mockingbird, Tender Mercies). The Pultizer-winning The Young Man From Atlanta (1995), which remembers 1950’s Houston, TX as ordered, burgeoning, compassionate, and stifled, is a realistic and very patient portrait of a bygone time and an increasingly antiquated way of life. The Seattle premiere runs through March 10th at Wallingford’s Stone Soup Theatre.

Will Kidder (Gordon Coffey) is the archetypical patriarch, an aging entrepreneur with an I’ll-tell-you-how-it’s-going-to-be mentality that imposes itself, for better or worse, on every aspect of his personal and professional life. He and his wife, the submissive and deeply Christian Lily Dale (Maggie Heffernan), have enjoyed a comfortable life together, periodically upgrading to a bigger and better home, hiring servants to cook and clean for them, and accruing continually. The Kidders are products of The American Dream, Will’s hard work having established for them a lifelong trend of expanding affluence and security. Such is the world of the play, as it begins.

The Young Man opens in Will Kidder’s office where Will, in a clumsily-written monologue (which Coffey draws every bit of nectar out of), lists his own character traits to a colleague, who listens in resigned silence. Kidder describes the depth of his own work ethic, his penchant for ‘the best things,’ and remembers aloud launching the once-blooming, now-stumbling company. He shows off the plans for the new house he’s recently had built and fully furnished. He describes his pride in having purchased a new car for his wife. On a somber note, he speaks of the relatively recent drowning death of his son, Bill, the couple’s only child. At one point Will comments on his own speech, ‘I don’t know why I’m telling you this. I guess I think of you like a son to me.’ Most of Will Kidder’s cards are on the table early on, a very dense introduction to the drama’s central character.

The latter half of the opening scene is an immediate affront to the self-congratulations and optimism Will has been relishing. The company has been less competitive than ever, contracts have been drying up, and what Will considers the insight of his vast experience has been pinpointed as the source of the problem, he’s branded as old-fashioned and out of touch. He is let go, and so his livelihood and future are plunged into doubt. Many sources of pride slip at once.

Meanwhile, at the Kidder household, Lily Dale has been corresponding with a young man from Atlanta, Randy Carter, with whom Bill was roommates and was additionally close to in glaringly unarticulated capacities. Will is aware that Carter has been attempting to reach the family and, as the master of the house is empowered to do, expressly forbids Lily Dale to communicate with him. Yet the young man is so generously willing to warm Lily Dale’s heart with recollections of Bill’s beautiful prayers and spiritual vitality. She, for one of the only times in her life, defies Will to maintain a secret relationship with Carter. When Carter allegedly suffers a series of financial disasters, it’s all Lily Dale can do to drain most of the money from her considerable savings, which she’d gradually amassed over a lifetime of Christmases, monetary gifts from her husband, to aid him. This renders Lily Dale unable to contribute to the easing of the Kidders’ sudden financial toil, and enrages Will, who perceives her behavior as betrayal.

These are the major forces at play in the narrative: the handling of and speculation over Bill’s death; the looming, persistent, inquiring presence of Randy Carter; Will’s professional woes, and issues of his age and declining health. Once these dynamics are established Foote goes to great lengths to look at each from numerous angles, to talk them over extensively, and to comment on how each touches the others. It’s a dialogue-driven, realistic, linear contemplation of situations that are as slow to change as the characters who are faced with (and responsible for?) them.

This is not to say that nothing changes in the world of the play. Vast changes are undergone, yet they are primarily internal, many of them subtle, many of them not put to words. The best moments are muted, deep feelings suggested, but hidden under the surface, something the Stone Soup production somewhat mismanages. Tess Harper once said of Foote, “he’s a quiet man who writes quiet people.” With so many thoughts and pains being suppressed and swallowed so often, a tendency of the production is to crank the emotional dial too high, playing the few lines resembling confessions of emotional depth to the level of lamentation, which I don’t see intended in the text. While this becomes wearying–particularly bearing in mind the intimacy of the venue–it is the production’s only pronouncedly chaffing choice in handling a work that requires so much tender attention, a tenderness that runs contrary to the sensibilities of many of today’s narratives and performances.

In Randy Carter we have both a potential source of elucidation and a potent force of manipulation. The Young Man From Atlanta comes around to ask (rather, it invites us to speculate), “Who was Randy to Bill?” The possibility that the two were lovers, while neither Will or Lily Dale can bear to entertain it aloud, is written square between the lines. The possibility that Bill’s premature death may have been a suicide looms. Questions of what motivated Bill, who cannot swim, to swim alone that one day in a secluded Florida lake, shake his parents ceaselessly, which they by-default handle in self-imposed solitude. The Kidders labor to preserve their visions of themselves as they grapple to hold on to the life they’ve created. The drama examines how Will and Lily Dale stand up amid so much hardship and grief, one of the playwright’s recurring themes: the human spirit to endure.

It’s refreshing to see a cast of mostly older actors tread the boards, particularly in such an intimate space. Some very thoughtful character work is on display in the the Stone Soup production of The Young Man from Atlanta, a production that probably represents your only opportunity to see the acclaimed, subtle script in Seattle any time soon. In our world of foreclosures, fluctuating markets, and precarious comforts, this story of respectable, struggling 1950’s Americans doesn’t seem so distant.