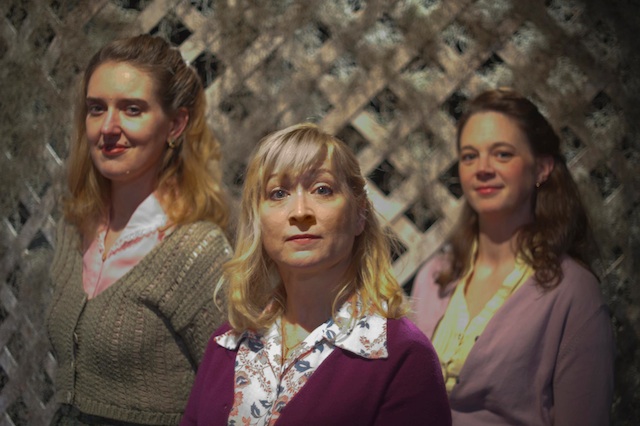 During an early run of Our Town, playwright Thornton Wilder, wrestling with the identity and initial reception of the now-classic play, put in a letter to one Sibyl Colfax, “The wife of the Governor of Massachusetts took it on her self to telephone the box-office that the last act was too sad. She was right. Such sobbing and nose-blowing you never heard. Matinee audience, mostly women, emerged red-eyed, swollen faced, and mascara-stained.” Surrounded by a chorus of sobs and a solemn wiping-away of tears, the nearest situation I’ve yet experienced to the one Wilder describes took place last weekend at Theater Schmeater, where Natalie Symons‘ epistolary play Lark Eden has returned, having enjoyed success at the Schmee April of last year, and then at freeFall Theatre Company in St. Petersburg, Florida.

Yes, I said epistolary play: The show is comprised entirely of letters written and shared by three women, lifelong friends, from the small southern town of Lark Eden. Beginning with their shared girlhood and progressing gradually through the quiet lives the three document for one another, the collection of written correspondences provide mosaic accounts of the lives of Emily, Thelma, and Mary (Katie Driscoll, Teri Lazzara, Michelle Chiachiere, respectively), a portrait of an unconditional love, and a bit of an exploration of 20th century American history and life.

The mention of Our Town isn’t only a convenient way to begin talking about Lark Eden, the similarities between the two shows are abundant. Similarities in tone, similarities in pace, and most strikingly, similarities in structure: At the top of Act II of Our Town, Stage Manager states, “The First Act was called Daily Life. This act is called Love and Marriage. There’s another act coming after this; I reckon you can guess what that’s about.” These titles would apply no less suitably to a breakdown of Lark Eden. The eventual arc of the drama is immediately self-evident from the earliest establishment of structure, and structure in the case of both plays makes for an at-times-tedious predictability. So from the moment the greater form of Lark Eden becomes clear, so does the trajectory of the story as a whole. So the strength of the show is not its ability to surprise, nor is it in its ability to make blood pump with particular fervor:

As at very, very few points in the play do characters speak face-to-face, there is little opportunity for (or rather, attempt at) anything but very subdued escalation. Nearly every word penned by the women provides a sense of having been mulled over, considered with some deliberation, and generally rendered into sonorous lyricism. This instills the play with a poetic, confessional, emotionally earnest quality that is its greatest strength, at the expense of any kinetic energy of pursuit. Very infrequently do any of the three characters attempt to get anything from one another, and rarely do we see them attempt to achieve anything onstage. Rather, they are stenographers of their own lives, describing intense and powerful situations they’re enduring, but enduring offstage where we can’t see them. We learn of every major life event after it’s happened, in either enthusiastic or resigned retrospect.

The fact remains that much of the audience was audibly, obviously moved. Patrons clearly invested themselves in the three dynamic, good-hearted central women, sympathized with their toils, and rejoiced in their successes. As Wilder confessed of his own feelings in regard to his drama, “almost everybody’s got some reservations against it (myself included),” but an emotional punch is none-the-less packed. I’ll be highly recommending this show for some, and nudging others to stay away. It’s an exercise in patient, sometimes-cerebral, sometimes-emotive contemplation and reflection.