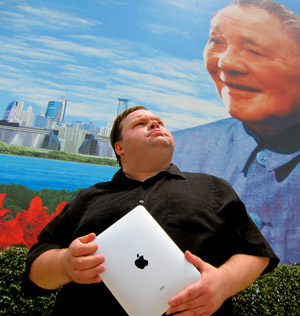 Whether the inclusion of this song, and thereby this couplet found in the refrain, on the pre-show music playlist was intentional or not, it immediately sets the tone for the evening and establishes Mike Daisey’s lofty goals with The Agony and Ecstasy of Steve Jobs, Daisey’s new monologue currently in production at the Seattle Repertory Theater.

On the surface, Agony is simply another entertaining entry in Daisey’s series of monologues that follow a personalized formula for success. He started perfecting that formula eleven years ago with 21 Dog Years, Daisey’s account of his tenure working at Amazon; this work arrived just as the nation found itself in the throes of the dot-com-boom, before anyone realized just how shaky the zeitgeist’s foundation was, and put Daisey on the national map.

For the uninitiated, the formula is pretty simple: Daisey, a self described professional blunderer, marries personal anecdotes with researched material about a given topic, and presents it in a style that owes a debt to several influences, but is the most recognizable one is Spalding Gray. Armed with only a chair behind a table, a glass of water, and scribbled notes on pieces of paper (which functions as a very loose script), Daisey relies on his gifts as a storyteller in order to weave an experience that tends to stick with the viewer for days afterward.

Over time, Daisey has had to implement his formula with extended forays into the heart of his subject in order to supply the connective tissue for the personal account portion of the formula. In 21 Dog Years and How Theater Failed America the tissue came from his own life experiences. For Monopoly!, his tour of sites connected to Nikola Tesla provided that tissue for the life story of Tesla himself. For The Last Cargo Cult, his wanderings took him to Tanna, a remote island in the South Pacific that adapted its culture to include artifacts from the West left behind after World War II, in order to explore the aftermath of the 2008 financial collapse and ensuing recession.

For Agony, Daisey travels to Shenzen, China, one of that country’s Special Economic Zones — a program that represents the country’s effort to join the 21st Century by handing over parts of China to corporations to use at will in order to gain technology and build commerce. While there, he tours corporate facilities like Foxconn, a place whose horrific working conditions the West is slowly but surely becoming acquainted with; Daisey details his experiences there and his conversations with the workers, with care and little sensationalism.

This personal accounting represents the heart of Agony, though it is only a small fraction of what the show presents to audiences. Surrounding it are two other ingredients, the most prominent is the amazing phoenix-like biography of Steve Jobs’ rise to prominence, fall to shame, and subsequent rise to dominance of our tech addled culture.

The final ingredient is integral to the success of Agony, this would be the time and effort Daisey expends towards making us know that he’s just as tech addled as the rest of us. He’s been an Apple acolyte from the first Macintosh iteration, and it’s because the symptoms are instantly identifiable with our own tech fixation that the evening progresses as smoothly as it does.

It’s important to note that Daisey does not make a villain out of us, the consumer; nor does he demonize Jobs or the Chinese government. Instead, his targets are the corporate practices that enable the creation of the dystopian realities found in Shenzen, along with our consumerist complacency. Even then, he doesn’t demand that we transform ourselves into a Luddite society, again, he’s as fond of our tech toys, tools and appliances as we are. His goal is simply to altruistically raise awareness of the conditions through which we gain our luxuries. This is a theme as old as time itself, though the two examples that spring immediately to mind are Fritz Lang’s Metropolis from one end of the spectrum, and Soylent Green from the other pulpy extreme. What Agony does is to make these fictions human, real and current.

The Agony and Ecstasy of Steve Jobs is the culmination of everything Daisey has mastered over the last decade or so in his pursuit to become the monologuist of our time. It is slick, humorous, and the most socially conscious of his work that your correspondent has seen. It is bound to discomfit some people, and there will be outsized reactions charging of sanctimonious preaching to be found in the message. This is inevitable, and indicative of people not wanting to be made aware of the realities we blithely, gormlessly ignore.

Daisey does not blame anybody for this tendency, he admits he would like to return to that comfort. But like Metropolis‘ protagonist, once he has discovered what it takes in order to sustain his privileges, he cannot help making others equally aware and work toward changing the system. Agony is the product of that effort.