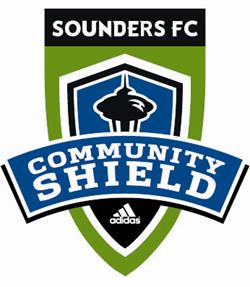 At the beginning of every English football season is an event called the Community Shield–or Charity Shield, if you’re old-fashioned. The idea is that the winners of the League Cup and the FA Cup meet each other and raise some money for charity. Revenue from the match goes to all 124 clubs who competed in the FA Cup for them to distribute to charities and projects of their choice.

In Seattle, Sounders FC have taken this idea one step askance. The holders of the US Open Cup, our Sounders, would normally meet with the holders of the MLS Cup, the LA Galaxy. Not this year. This time the opponent is Club Jaguares de Chiapas from Mexico.

Additionally with this year’s match, Sounders FC have made the entire match itself free for the community, while continuing to raise money and donations for local charities. Admission to the game is free, but fans are encouraged to bring their own donations for charity. Adidas, the sponsor for the Community Shield, will make their own donation of $2,000 and sponsor several youth team directly at the match.

Charities include: Seattle SCORES, Boys & Girls Clubs of King County, Special Olympics, Washington Global Health and, naturally, Washington Youth Soccer. The first year’s Community Shield raised $80,000 for local charities and one can only hope for that sort of return this year.

The external significance of the game is that it is the first time Seattleites will have a chance to see their much-revised team in action. The team has lost and gained many faces. Sounders FC have lost starting fullbacks James Riley and Tyson Wahl, forwards Mike Fucito and Nate Jaqua, midfielders Erik Friberg and Lamar Neagle, and of course the team’s captain, goalkeeper Kasey Keller–who returns to the Sounders in the announcer’s booth.

Austrian keeper Michael Gspurning, Swedish defender Adam Johansson and Danish midfielder Christian Sivebæk have joined the team, along with the much-hyped USMNT striker Eddie Johnson and former DC United left-back Marc Burch. They’ve been impressive in pre-season play, undefeated over their six matches, and all of them away from home. This match is a good chance against a Mexican team to prepare for another Mexican opponent in a much more important game, when Sounders FC play Club Santos de Laguna in the CONCACAF Champions League quarterfinal next week on March 7th.

If you have never been able to afford a Sounders game before…this is your chance. It looks to be typical soccer weather outside, if even colder than usual. Dress warm, stay dry and sing and chant as loudly as possible.

Gates will open at 6 p.m. Seating is first come, first serve throughout the lower east bowl of the stadium.