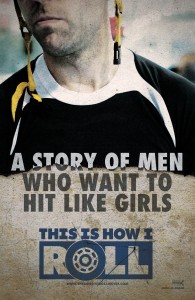 Direct from the creative minds of New York filmmakers Kat Vecchio and Joe Mihalchick is This Is How I Roll—a fresh STIFF documentary depicting men who actually strive to skate, hit and dominate just like the ladies. In the world of flat-track roller derby where most of the athletes are ladies (and tough ones), we follow a rag tag crew of dudes who want to join in on the dynamic world of derby, but who encounter endless obstacles and opposition along the way.

Right away the mockery of “merby” culture is fairly apparent as the crew slips into buildings and past signs for derby that explicitly describe it as an “All Girls” extravaganza. As the men saunter by, juggling helmets, skates and knee pads, and the camera scans more images of “female only” signs and paraphernalia—it becomes apparent that this journey is not an easy one.

This seamless documentary cleverly escorts us along this bumpy and hilarious road—filled with characters, conflicts, and the men’s unwavering desire to win the acceptance of the women who sometimes despise, and more often ignore them. It’s a strangely endearing process. And eventually their endearing (and enthusiastic) leader, Jonathan R. of the New York Shock Exchange, manages to use his background as an “artistic roller figure skater”—yes, that’s apparently a thing—to whip together a pretty bad ass group of players. Initially their only option for playing is as half-time entertainment during women’s games. And from traveling across the country for ten precious minutes of play, to expressing time and again their admiration for the female players, their determination is unshakable. Their journey toward creating their own tournament is speckled with interviews featuring colorful characters like Abe Drinkin’, Bonnie Thunders and Dr. Spankenstein—all with varying views and opinions (let’s just say that Bonnie rocks a shirt with “there are no balls in derby” splayed across the front). Maulin’ Brando, filmmaker Joe Mihalchick, makes a few appearances with his teammates, as do members of other men’s derby teams including Quadzilla from our local boys, Puget Sound Outcasts. As the men keep truckin’ along despite the naysayers and hecklers, they eventually win the support of some surprising allies, and come closer to realizing their dream of a true and united roller derby world.

This film does a remarkable job of capturing the confusion and complexity of their progress. Whether jumping between interviews with prominent players—Jonathan R. praising their magical first performance, and another player lamenting his memory of that same game where they’re all “just trying not to fall”—the confusion is palpable and hysterical. It also doesn’t hurt that the film maintains a kick-ass rock ‘n’ roll playlist that perfectly compliments the colorful and chaotic mess that ensues when they skate. They say that imitation is the sincerest form of flattery, and in This Is How I Roll it’s apparent that this group of men want nothing more than to play like one of the girls. And isn’t that good to hear for once?