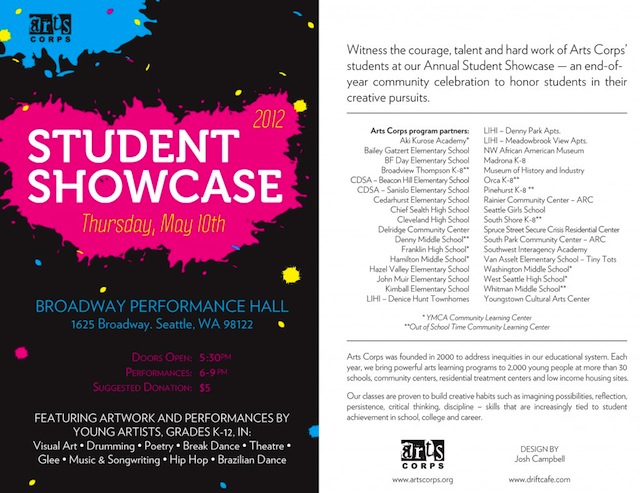 It is no secret that I am a firm believe in the meaning of art as essential to civilization. It is also no secret that I am a firm supporter of arts education and I value far more than most people the purpose and the place of youth in the arts community at large. Certainly I have written about the importance of keeping youth involved artistically and just as certainly I will continue that crusade throughout future issues of the Seattle Star. They are not only potential future audiences, as some treat them, they are also future leaders not only in the arts but in our culture at large. It is important for today’s youth to have a fair and diverse access to the arts, that they incorporate the arts into their lives as something more than just a dilletante activity but rather as a part of being an informed, cultured citizen of the society at large.

Virtually every citizen is aware, for instance, of the massive cuts made to arts funding and arts education on a national scale over the past twenty years. Fewer people, however, are aware of the immense disparity between the haves and the have nots when it comes to the education their children receive in the arts. The goal of arts education is not simply to bring these things to light. It is to make them meaningful things to the lay public. A public that has had a reasonable education in the arts is more likely to see it as socially and culturally important. When arts education fails, it fails our culture and our society at large. If arts are to be the roots of a greater society, it is important to water the roots so that they do not wither.

For that reason, programs like ArtsCorps have always been of utmost importance. ArtsCorps was founded in 2000 to address the economic inequity in arts education. Its goal is not only to help bring arts to the low-income communities but also to bring the low-income communities into the arts through direct participation. Each year ArtsCorps bring performance and visual art programs approximately two thousand youth in a wide selection of schools, community centers, treatment centers and housing projects, encouraging them all to participate.

Tonight at the Broadway Performance Hall is their annual Student Showcase. The showcase, which was once upon a time quarterly, features the visual artwork of young artists all the way from kindergarten ages through high school. Dance and theater feature prominently, as well as poetry, songwriting, glee club and musical performances. Drawing from diverse schools like Kimball Elementary, Aki Kurose Academy and West Seattle High School, as well as the YMCA and Out of School Time community learning centers, the material on display is every bit as varied as one would suspect.

It is a time to honor the students not just for their talents but for their courage in even attempting anything artistic in a climate that is often hostile and generally indifferent. These are students who have learned from some of Seattle’s finest artists: David Lasky, Jerome Aparis, Holly Wong-Wear, Geoff Garza, Tina LaPadula, Arturo Rodriguez–the list goes on. Go show them some love and appreciation. This is a future you can help make happen.