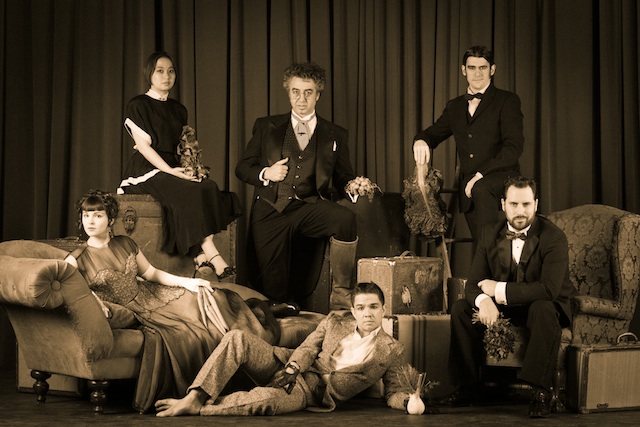 Seattle’s history of innovation in combining a meal with some form of performance-based interactivity is a fairly varied one; which stands to reason when one considers the fertile Food and Performing Arts scenes our region is host to. It is only natural that the two would combine in order to create a hybrid of the two; over the last couple of decades, Seattle has been the birthplace of Entros (restaurant + immersive gaming), Teatro Zinzanni (dinner + entertainment revue), as well as the experimental Dinner Theater (the 2006 brainchild of Matt Richter, done as a co-production with On The Boards, micro- & fusion-cuisine + artistic exploration of a theme).

Cafe Nordo, which came into existence in 2009, is the latest venture to enter this essentially unexplored territory, and has, in that time, developed both a following and a reputation for delivering highly engaging evenings of theme-driven entertainment in unique locales (past settings/themes have included the Jet Set 60s, Speakeasies, a treehouse) while providing either a five-course dinner, or an evening of cocktails. The reason behind their fervent following resides in the fact that their productions reside somewhere in between the aforementioned Teatro Zinzanni and Dinner Theater, where great attention is payed to both the food, the performances and the detail with which they adapt to their environment.

For example, in Cabinet of Curiosities, Cafe Nordo’s latest production, the team has inhabited Seattle’s historic Washington Hall, in just about every sense of the word. While waiting in the lobby before the show begins, the atmospherics are already being established: A piano is playing some timeless tune somewhere within the building, it could be Rachmaninoff — its provenance unimportant as it hauntingly plays out as its echoes settle upon the mood.

Soon, the large assemblage of diners are split into three groups of 20 and assigned to a guide (Carter Rodriguez, Keira McDonald and Devin Bannon), and are led to three different locations in the building for a champagne aperitif. This is the last time the guests are left to their own devices, and while no mingling occurs at this time (Northwesterners as we are), the guards are lowered. The room we were in contained a number of artful curios to peruse; presently we were taken to our first destination for the evening.

The conceit behind Cabinet is that the audience are guests inside Chef Nordo Lefesczki’s Cabinet of Curiosities, a structure that resides outside of time, a sort of combination of The Restaurant at the End of the Universe and the TARDIS. The circumstances of the people who inhabit the Cabinet is left ambiguous, though it’s implicitly hinted at least once that they may have died somewhere in their past. Regardless, they are here, and are presumably spending eternity serving these dishes to those who come and inhabit their realm for the time being, and while the guests are in their realm, they will at least attempt to entertain them.

There are three rooms in the Cabinet that the audience is rotated through, each with their own theme, before coming together for the main course. The Invasive Species Lounge is home to a largely vegetative environment, fittingly, we are served a fennel salad with a rabbit confit (vegetarian options are available throughout the night) — the salad is served with a Cotes de Gascone, a very dry white wine that pairs nicely with the confit and fennel. Our hosts are Turtle (Evan Mosher) and Myrtyle (Sachie Mikawa), a pair who have an ongoing silly rhyming game, and who communicate with the plant-life in their own language (heavily reverb-ed and effected trumpets), creating a semi-psychedelic soundscape for those waiting to be served.

The Crone Parlor is focused on taking those base vegetable and herbs and creating something both nourishing and healing with them. Our hostess in this room, the mercurial Healer (Aimée Bruneau), is greatly concerned that those of us in our modern day are so disconnected from the healthful nutrients found in a simple leaf, while her assistant Bartholomew (Max Davis) is there to keep her grounded. We are served a hearteningly creamy celeriac soup with a dollop of dry-iced herbal cream (paired with a delicious extra-dry vermouth) that is one of the highlights of the evening.

The last room in the appetizer course (again, the order these rooms are visited in will depend on which group one starts in) is served in the French Salon, where the inhabitants (a pair of American ex-pats living in Paris, loosely modeled on the Fitzgeralds, and played by Opal Peachy and Mark Siano) share their fixation with the gustatorial joys, and the possible danger, borne from eating mushrooms. We are thus served a morel camembert tart (served with a pleasant Cotes du Rhone) that quite simply proves the belief that the morel is the tasty beef of the fungal world. This is quite a striking room to sit in, decorated as it is in a multi-faceted black and white (done by Siano himself, who also plays the piano and sings, while Peachy saucily flirts with the audience).

After the appetizers have been eaten, the audience is taken to the main hall, where dinner is served. The main course consists of seasonal vegetables (prepared in a number of ways), served with a King salmon, and a fillet from a local farm. The fillet itself is another highlight, served rare and behaves like butter upon the tongue, quite suited for the sangiovese that accompanies it. This course is served as the various players from the evening perform a dance, then comes dessert, and the evening comes to a satisfying conclusion.

The detailed description above fails to do justice to the overall mood struck by the production, which contains a tone of mild and not overwhelming Romantic mystery. This is capped off by a coda as the proceedings end that recalls a specific moment earlier in the evening, giving the night a cleverly haunting quality. Also, although the guests are complete strangers at the beginning of the evening, by the end there is a shared conviviality with all involved, and conversations with complete strangers are likely to occur. It is a kindness to be reminded just how much of a pleasure such a thing can be, and makes one yearn for that sort of openness on a more consistent basis.

Finally, the way that Cabinet utilizes the recently restored Washington Hall does the building a great justice. While the work of refurbishing the building is an ongoing project, Washington Hall has an important place in Seattle performance history, it is good to see it in action.

The evening is not deep in meaning, it isn’t intended to be. It is, however, a rich confection for the mind and the senses. Cabinet runs through the middle of June, and tickets are going fast; there are only 60 seats available each night the Cabinet is open, making this an event with very limited access.

A couple of words to the wise: 1) Bring a date, whether platonic or otherwise. While the comfort level increases as the night progresses, it helps to make the early goings a little easier to get through. 2) This is a properly scheduled five-course meal, with dishes timed to be served, eaten and digested at allotted times. For the uninitiated, this takes a while, longer than a typical night at the theater/restaurant; please plan accordingly. 3) It is true that we are in Seattle, stereotypically a city where dressing for the occasion rarely happens, and while it is not strictly mandatory, do yourself a favor: Dress up. It is remarkable the effect this has on the spirit, and you’ll buck conventional wisdom in the process.