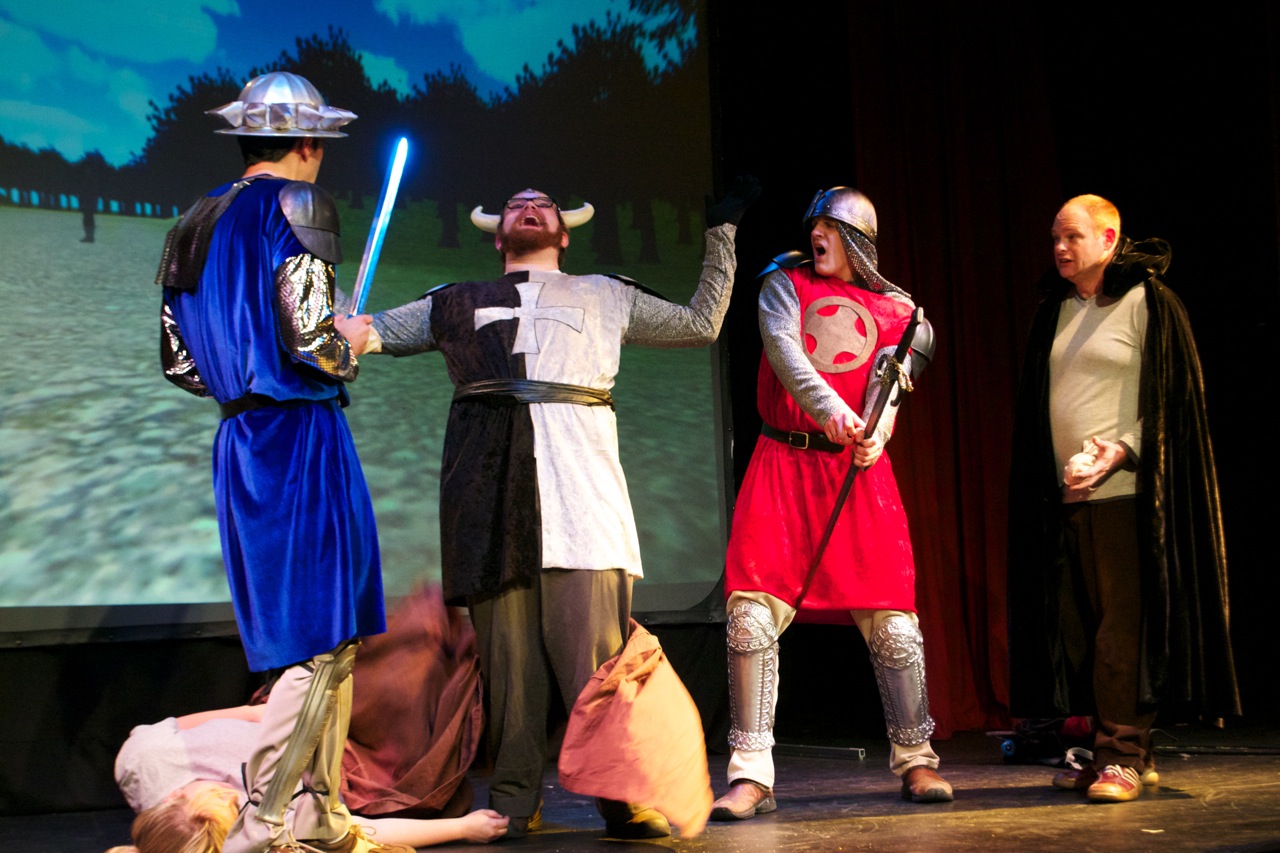 [/media-credit]There is often a fine line between video games and reality. Some of us pour over a controller or mouse for hours at a time, tailoring our gaming experience to be exactly the fantastic reality we wished we could live in. Being able to escape from the sometimes harsh, sometimes monotonous minutia of our existence is in part the reason video games exist and have become so widely popular amongst people of all ages. So what happens when two people are given the opportunity to literally act out their real life experiences through a fantasy world in a video game? You won’t know until you witness the onstage interactive video game improvised show, GAUNTLET.

What Seattle’s improv company, Wing-It Productions has been able to accomplish on a live stage for their newest long-form improvised show is truly anomalous. Creator Don Gillet harkened back to six years ago when Wing-It put on a show called CUT! The show was “a groundbreaking production that utilizes digital video and green screen media to stretch the boundaries of traditional theater and blur the line between the audience and the stage,” according to Wing-It’s description. Though it took place before her time as Wing-It’s marketing director, Jeannine Clarke, says the show is often referred to as legendary. Years later, Gillet decided to create a similar theater experience employing the newest innovation in interactive game play, the Xbox Kinect. Three game designers were brought on board to create a game that could be used as the performance tool in which the entire show would be centered around. Two months later, GAUNTLET is born.

As the actors take the stage, a real-life scenario plays out, which is then supplemented by video game play that somewhat mimics the reality of what the two gamers are going through. It is important to note here that as the two actors play the game that is projected on the backdrop screen on stage, the characters that are running around on screen are being controlled through interactivity with the Kinect game in the corner of the stage. Everything that happens in the game is controlled by the actors in real time.

Cut to the player characters and non-player characters (the quest givers, the villain, the damsel in distress) coming to life on stage and improvising their way through a game scenario filled with comical sword fighting, dramatic plotting, and I kid you not, jousting. Yes, ladies and gentlemen. There’s jousting.

What truly impressed me was not the flimsy story (which was at best, kind of hokey yet relatable), but instead the witty gamer jokes that of course everyone in the audience could relate to and laughed uproariously at, the incredible use of the game as the centerpiece of the show’s special effects, and the spot-on costuming. Each costume for the game characters was replicated perfectly to translate from the game to the stage. Production value of a show hinges on how captivated the audience is; and the attention to detail given to any theatrical production is essential to making a seamless transition from reality, to game, to fantasy, and back.

As I am rarely disappointed with the quality of improvisation delivered by Wing-It Productions, GAUNTLET was no exception. The actor who stole the show in last night’s performance was by far Phill Arensberg, who played up to the audience like a pro. He had everyone rolling with his Medieval Times-like Michael Buffer impersonation as he announced each jousting scene. Brilliant.

One last reminder, guys: Every. Night. Is different. So, don’t go expecting things to be exactly as I just laid them out for you. Yes, this will always be an interactive video game improvised comedy with two gamers. And rest assured, it was mentioned in the Q&A after the show that there will always be jousting (I know, huge sigh of relief). Aside from that, each performance is shaped primarily by audience suggestions and whatever sick, twisted scenarios the improvisers come up with on the fly. Your mission, should you choose to accept it, is to sit back, be transported to a time in your life when video games revolutionized the way you thought about the world, and laugh.

UPDATE: According to Twitter, GAUNTLET’s run has been extended through June 22! That’s right, you still have a chance to catch this show.