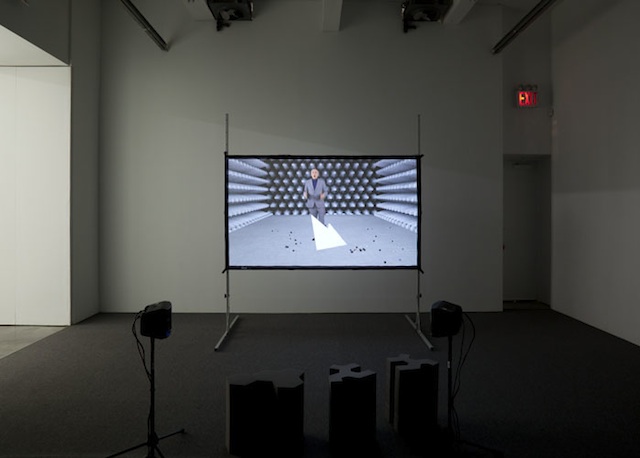 Even among my friends and associates who tend to consider themselves more cultured than most, very few have heard of Gary Hill. Behind this lack of knowledge, I suspect, is the typical disdain with which Seattle often treats its own artists, preferring to fantasize that nothing good ever happens here and the real world is always somewhere else, probably New York. But New York only wishes. Gary Hill is one of the premier video artists in the world. He has several pieces in MOMA. He has been recipient a 1998 MacArthur Foundation genius grant, among other awards including the Leone d’Oro at the Venice Bienniale in 1995. Even The Stranger have deigned from their lofty station to award him their coveted 2011 Genius Grant. Gary Hill founded the video program at Cornish College of the Arts in 1985 and has lived in Seattle ever since, creating most of his major work here including the brilliant Tall Ships which belongs in the permanent collection of the Henry Art Gallery, with whom he shares a twenty-five year working relationship.

His newest exhibit at the Henry is the obliquely titled Glossodelic Attractors and collects eight of his works from the late 1970s to the present. The Psychedelic Gedanken Experiment, Sine Wave, Isolation Chamber, Beauty Is in the Eye, Mesh, Withershins, Searchlight and Up Against Down.

The Psychedelic Gedanken Experiment is a time-based video work in two parts. The first part plays on the first screen. It is a performance, a demonstration of some sort in which a speaker enters the room, takes apart a large molecular model and a five-legged table, all the while speaking in a slow, methodical nonsense language. At the end of his demonstration he puts on a pair of blue gloves and a lab coat, then leaves.

The second part is a 3-D projection of the first. But this time it plays in reverse. The scientist arrives in a room with a dissembled folding table and various pieces of a molecular model lying about. The language played backward is now obviously English, though a version of English out of phase. This only enhances the psychedelic effect. Explores the relationship of LSD and art, positing that the creation of LSD is one of the great works of found art a la Marcel Duchamp in the 20th Century, and then explicitly compares the experience of psychoactive drug to the experience of art on phenomenological, epistemological, spiritual and emotional levels with a dead seriousness.

Withershins is difficult to describe. On the literal level it is a maze with two entrances. Entering from the left triggers a female voice; entering from the right triggers a male voice. Each step one takes in the maze triggers a certain word or phrase which, when combined, form a poetic text about the connection of handedness to the separate hemispheres of the brain. If one skips over one of the triggers, the entire thing must begin from scratch. With various combinations, one can create a number of different texts in either the male or the female voice. With luck, a single person may trigger both voices in unison. It sounds every bit as complex as it is, a thorough investigation of the possibilities of combinatory language.

The visual level adds still another layer of complexity. Entering from the side with the female voice, the spectator can see a person’s hands gesticulating in something akin to sign language. Entering from the male voice’s side, the spectator sees only the back of a person’s head that turns slightly, but one can never see his face or any features. I leave it to the reader to suggest an interpretation.

Mesh is much more of a purely structural piece. The piece is set up within a rectangular room with one entrance. Along the walls are various strands of wire mesh, each piece being a different gauge of mesh from the rest. Each wall contains two different video screens, whose low-resolutions are suggested metaphorically by the large squares of the wire mesh behind them. A series of a dozen or so small speakers hang along the walls near the speakers. Immediately a person enters the room, a surveillance camera confronts him and takes his picture. First a click then a strong beep comes through a speaker to the right of the entrance, then gets passed along in changing volume levels around the rest of the speakers on the walls–a true surround-sound.

As one walks throughout the room one can spot two other cameras that also take one’s picture. Each time the picture is different, each time at a different resolution. The six screens around the room take the initial low-resolution picture and decay it even further, each with its own peculiar type of processing, featuring zooms, phase shift, mesh overlays and other effects.

Divorced from Mr. Hill’s usual preoccupation with verbal language it instead is an analysis of figures in space but also a commentary upon the process of surveillance and its reduction of the human identity (implied by the human figure) into something quite unrecognizable and bizarre. That the piece is as old as it is speaks volumes about how very little the nature of surveillance has changed and, if anything, has become even more dehumanizing as it has increased.

Beauty is in the Eye is a smaller piece that also avoids language and deals directly with perception. A pair of large images–a clown proferring a red rose in a small vial to the spectator–hang on a wall. In the middle of the room is a stereoscope for viewing the clown in a primitive 3-D mode. Simple enough, so far. Opposite the stereoscopic clown, however, is a video screen representing the clown’s point of view. Throughout the video different people (featuring dancer Ezra Dickinson among others) come up to the clown but each one receives something different. Some receive a rose, but of a different color; some receive different flowers entirely. Each person receives something different from the clown and each has a different reaction–one of the recipients even eats the flower she is given. Indeed: beauty is in the eye (of the beholder).

The other pieces are even more subtle. Sine Wave (the curve of life) is a quiet study of visual perception with an analogous arrangement to Beauty Is in the Eye: two stereoscopic screens on which are projected two slightly different video loops of a glass of water on a plank that rotates clockwise then counterclockwise. The environment of flora is refracted through the glasses of water giving two different inverted images of the environment which the viewer can steadily contrast with the environment itself. Even more subtly, one of the screens is concave while the other is convex (thus the title), creating an even more subtle range of contrasting visuals. With this spartan economy of means, Sine Wave creates a quiet appreciation for the infinitely beautiful phenomenon of human vision.

Searchlight is exactly what it says: In a small, darkened room a modified reflector telescope with a motor unit acts as a searchlight, slowly rotating back and forth over a wall space and shining a light from within. At the edges of the wall, the light is a two-tone blur. The light appears to be set up so that within a 105 degree angle things slowly begin to come into focus and as the “searchlight” is absolutely perpendicular to the wall the image is quite clear: it is an empty ocean with a stormy sky. Just then as it focuses the sound of waves roars throughout the room then just as suddenly diminishes. The whole scene creates the sensation of scanning the sea, looking for bodies after a shipwreck. It is incredibly eerie and quite beyond the limitations of verbal language.

Its companion piece in the exhibit is Isolation Chamber, which takes a different approach to a similar situation. On a fairly calm ocean, a camera very slowly tracks in on a surfboard drifting through the waves. As the camera zooms in, one can make out a stenciled non-human face with an expression of surprise on it, then as the surfboard fills almost the whole height of the frame, a quiet swell of sound increases to a roar and the entire scene is overwhelmed by the sight and sound of a tidal wave that sweeps away the board, throwing it aimlessly into the abyss. The surfboard resurfaces into a stillness that is disturbed by the sound of helicopter wings and the waves presumably created upon the water by the blades of the chopper. The camera then withdraws, tracking slowly out until the surfboard is no longer visible and all is still and silent again. The eerie quality of the piece is more explicit than Searchlight but every bit as powerful.

Up Against Down is more static: it is a six-screen projection upward into a tube of different parts of the body: two arms, two feet, a back and a head. The motion, such as it is, is much more subtle even than Searchlight or Sine Wave. The arms and the back slowly move. A white box one may sit on to gaze up at the sculpture contains a subwoofer that vibrates with low frequencies which penetrate the body with both audible and subsonic waves. I spent the entire time gazing up at the ceiling thinking about Clive Barker’s horror story in which the individual limbs of the body begin to rebel against the tyranny of the head, feeling the sound course through me and causing a feeling somewhere poised between fear and affirmation, quite difficult to describe.

Most writing about Gary Hill’s work discusses the “phenomenological level” of visual and verbal communication. While phenomenology is certainly important to the intellectual side of Mr. Hill’s work and his work most certainly has a strongly cerebral component, I do not think a viewer need be versed in Edmund Husserl’s or Gregory Bateson’s writings to grasp the work’s strengths. While he is known as a “video artist,” in truth Mr. Hill has always considered himself a sculptor and his work invites any viewer to appreciate the purely visceral quality of his work and the joy of simply being engaged with the puzzles, intellectual and physical, that it proposes. This is a brilliant survey of the work one of Seattle’s truly great artists. The range on display gives a viewer a fine introduction to the breadth of Mr. Hill’s explorations over the past thirty years, a body of work that should make every Seattleite proud to have such a creative spirit in our fair city.

Through June 30 // Henry Art Gallery at the University of Washington // Admission $5-10, free for students, children and members