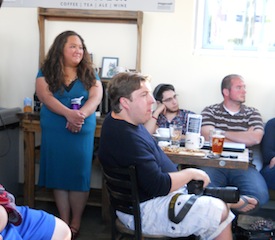 [/media-credit]
My voice is high and taut, thin and shaky: a tightrope of sound. I’m laughing nervously, too much for anyone’s comfort. Am I trying to make everyone laugh along with me? Does it work? I can’t tell. When will I stop laughing? Why can’t I stop laughing?

At least it’s a tape recording of the dress rehearsal.

My producer Megan‘s sent it to me, so that I can listen. I’ve never wanted to listen to myself on tape, and now I know why. All I know now is that I want to crawl under a rock.

The night before the show, I can’t quite sleep–so my husband Josh can’t sleep, either. Our first mistake is to watch the latest Mad Men episode. The intensity there leaves us wanting some palate chaser in the form of Parks and Recreation. By then, we’re up until 11:30. And I still can’t sleep. We talk until 3:30 A.M. This might not have been so bad when we lived in Seattle during grad school, before we had our kids. But now, when the alarm’s set to go off at 6:30 A.M? Crap.

Why the insomnia? For the last week or so, I’ve been practicing the very last few lines of the story, over and over. Those are what I want to remember: that’s my landing that I want to stick when I jump off the balance beam. But it’s finally hit me, what this storytelling (and its preparation) has meant to me.

True-life storytelling, I’ve come to see, is actually terrifying for an introvert writer. It’s what happens when all the trappings, the crutches, and the podiums have been taken away–when the distance between the teller and the listener is no more than a cafe table‘s breadth away. And it’s also different than being in theater–true-life storytelling is just me, as me, and no one else, on stage. There are no notes, no written words to hide behind.

I’ve always thought that the story was the story of my first yoga headstand. But with Megan’s generous and compassionate help over these past months, I’ve come to see that it’s the story of how I learned to do my first headstand while I was losing my job. I’ve also come to see how the process of speaking those words publicly might help me move forward into my next career. So the whole process has asked me to redefine accomplishment and failure. And for a straight-A student, that’s saying something.

I had called Josh the day before and wailed in despair about the nervous laughter. “You just need to relax,” he said. “Remember to breathe more.”

Not bad advice, especially for a story about yoga.

The next day, show day, I’m running on 3 hours of sleep. And I’m with my youngest daughter all day, an adorable 4-year-old bundle of energy who loves to cuddle on my lap.

I manage to do a little bit of yoga that day, even with my daughter at home. I’ve absorbed enough over the years to know about the poses that will probably help. I rest my legs up against a wall, for about 5 minutes. My daughter’s intrigued enough to come over and rest her legs up against the wall, too. That’s a pose that’s supposed to give energy, while it relaxes you. Then we do some downward-facing dog together for a couple of minutes, which takes the tightness out of my shoulders and neck and upper back. And then there’s a standing forward bend, which is also supposed to give energy. I don’t do a headstand for some reason–don’t want to jinx the story.

By some instinct, I also try to sing a lot that day. I’m an expert shower, at-home in-the-living-room singer. One of my favorite things to do is put on girly music, power 80/s90s pop ballads, show tunes, old-school female jazz vocals,and sing along. I trot out some 90’s Janet Jackson, the Bangles, Annie Lennox, Journey, Adele, Nina Simone, Ella Fitzgerald, the Les Miserables soundtrack, the Moulin Rouge soundtrack. I also drink lots and lots of water.

Each of those acts makes me breathe deeply, and relax.

When I get to the venue, then, I’m nervous and excited, but also still determined to relax. About fifty people have drifted into the cafe by the time we start, including Josh, and my best friend from grad school, a friend from my old job, and even one of my former students.

When Megan calls my name to come up to the mike, I’m ready. Megan adjusts the mike down, and I make a small joke about being a former teacher. I ask folks to come and take the empty seats closer to the stage. I even sneak in a few opportunities to breathe deeply and even audibly during the story itself. It’s about yoga, after all.

And I slow down. I’ve got the story enough in my head, into my body. By the time I get to the headstand moment, the line “I”m comfortable” resonates: both for that first headstand, and for this present moment at the mike.

I’m comfortable. Something feels different when I’ve finished. I was worried about how I’d come down from a post-performance high, but instead, I’m relieved. Seven written drafts, seven essays here, two workshops, three rehearsals….and it’s been worth every step.

For now, what I’ve got is the slow tectonic shift, the gradual sea change: a settling into the quietude that I felt after the story was over.

*Later I will have an audio recording, and I’ll post that here if I can. Thanks again for following along.