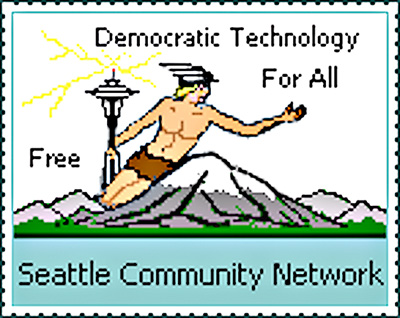 It’s 1993. Unless you are locked regularly in the basements of university computer science departments, you have never heard of the World Wide Web. If you have a computer at all, your computer runs at a maximum of 100 mHz and may have 4MB of memory, unless you can spare an extra thousand dollars in which case you may have 8MB–if your computer can actually accept it, since upgrades are impossible in many models. Text rules the computer world, and only Macintosh users deal regularly with images through Aldus Pagemaker and FreeHand–yes, Aldus–and Adobe Photoshop, which does not have layers and has only recently added EPS rasterization.

If you are on the Internet at all, you are exceptional and you are using WAIS and Gopherspace to do your research. But something major is about to happen, though you don’t know it at the time. In February, the University of Minnesota will announce that it will charge licensing fees for the use of its implementation of the Gopher server. Two months later, CERN will announce that they do not own the World Wide Web and believe in a free protocol: the nascent World Wide Web will be free to anyone, with no fees due.

But there is something else, something even more revolutionary about to happen: the National Center for Supercomputing Applications at the University of Illinois at Urbana-Champaign is about to give a public demonstration of a new browser for the World Wide Web called Mosaic. It will become the first WWW browser that handles images inline with text rather than in a separate window. A visionary person can see that all the information currently on the Internet will soon move to the World Wide Web. The Web, with its friendlier graphical interface and its far less restrictive protocol, will open up the worlds of knowledge to even the least sophisticated user, causing a complete paradigm shift in the handling of information and the way people think across the globe. This would change not only how people think but also how they interact and live their lives as global citizens.

Doug Schuler was one of those visionaries who saw this in 1993. On a lunch break from Aldus where I was doing contract work at the time, I bumped into him. He began to tell me and my friend about his new project: a traditional community network but totally electronic. Ever concerned with social justice, Mr. Schuler saw the upcoming community network as a place to help break down economic barriers to success and to help reintegrate the community as a whole by providing free Internet access to anyone with a library card. This would not only encourage current library users to expand their knowledge, it would also encourage those who were not library users to become involved with their libraries. The new technology would also be to provide electronic “one-stop shopping” for community information and communication, by using discussion forums, providing information and access to social services and give users access to electronic mail that would ensure even if they were homeless or itinerant they could be reached by employers and family. I was naturally concerned with the same ideals as he, so I told him I would do what I could.

Such were the beginnings of my involvement in the Seattle Community Network. I volunteered irregularly to help them get things set up but mostly I used my first magazine, Free Forum, to get the word out about the new “FreeNet” that would debut in 1994 and to pull much more knowledgeable people than myself into the cause.

Not quite twenty years later, the world has certainly changed. The graphical browser and the World Wide Web have integrated so fully into most people’s lives that they can barely recall a time when such things were fantasies. The Web itself has changed drastically from a sort of passive database of information into a dynamic and chaotic mode of interactive communication. Yet the principles of the Seattle Community Network have remained consistent. SCN has always been committed to five general things: access, service, democracy, global community and the future. They have done very well at the first four commitments.

The fifth commitment, the future, has proven problematic. I have been an SCN member since it began. Until 2005 or so, it was absolutely indispensable to my tech life and doubtless many others felt the same. My primary email address still resides there. Since then, however, a feeling of stagnation has slowly set in. Government agencies themselves have stepped up to provide access to the Internet and various commercial services have taken over the service of providing free email. What has been lost in this transition are the things that make SCN so valuable as an idea: a true dedication and active participation in social equality and economic justice, and the dedication to an electronic town hall and electronic encyclopedia of civics that allows true political access to all users.

Saturday June 9th, SCN holds its annual general meeting. True to form it is in a library: the University Branch of the Seattle Public Library. What is on the table for this meeting is an attempt to address and redress the commitment to the future, in particular, the development of the new “SCNwiki-Plus.”

SCNwiki-plus is intended to help address specific problems in the community.

While others have talked about such things for years, SCN are in a position to do it and do it well. But they cannot and should not do it alone. These are not simply technological issues, they are social issues and any respectable citizen of the area ought to take an interest in the proceedings.

SCN have been largely forgotten over the years and support for their noble work has been dismal. Perhaps ideas of social justice and technology are no longer hip. After all, in Seattle, with so many employed within the computer industry, the local chapter of Computer Professionals for Social Responsibility has suspended its meetings because no one will show up. While one may answer that this is because all people in the computer industry now are socially responsible and all believe in the same values anyway, one could just as sensibly argue that SOPA/PIPA/CISPA will have no effect whatsoever upon civil liberties. One may also argue that community networks have become obsolescent in the time of Facebook, LinkedIn, et cetera, but this is no more reasonable than assuming that advertisers who rely upon Google and Facebook to sell consumers useless goods are actually doing them a great service by appealing to their own personalized needs.

I happen not to share the current apathy for social issues. I also do not share in the rosy optimism that people voice about the free sharing of identity information over social media networks. There is nothing to suggest that social media are a panacea for social ills. The need for social responsibility in all areas of technology remains great. It is perhaps even greater now than it was when Mr. Schuler and I first had that conversation about the Seattle Community Network almost twenty years ago.