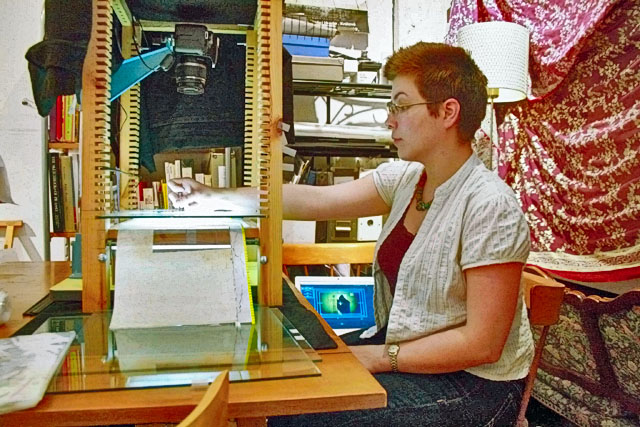 [/media-credit]For animator Tess Martin it all started with puppets.

“I went to the Edinburgh Festival and there was a ton of stuff happening all over: films, theater and all sorts of things. I happened to see a puppetry show and I had never really seen any live puppetry,” recalls Martin. “I remember just being completely struck by the performers who were on stage with the puppets, not hiding themselves but actually interacting along with the puppet…telling the story as if the puppet was another actor.”

Martin admits as an art student at the University of Brighton she had been aimless when it came to a focus for her studies. “My course was very much a conceptual art course,” Martin recalls. “People were doing installation art, sound art and performance art. That’s what I was doing at first when I started there, I was doing installation stuff.” Inspired by the creative synergy inherent in puppetry, Martin caught sight of creative vision she could frame as an academic, if not artistic, pursuit.

“I thought it was so cool,” says Martin, “and I just really liked how the puppets were able to express emotions and really connect with the audience. I’d never really seen inanimate objects be able to do that.”

Ultimately, Martin discovered puppetry was but a gateway. “When I got back to school I started making weird little wire and cut out puppets. I made a little film with cutouts and that was my first animated film.”

Rendered in black and white, Martin made that first wire and cut-out short utilizing an old quick action recorder. An ancient device well known to old-school Disney animators, the contraption was designed to photograph early pencil-test drawings prior to translating the frames into full-color animation cells. Though daunting, time-consuming and frequently arduous, there was no question Martin was hooked on animation.

With no one at Brighton familiar enough with animation to mentor her, Martin became her own tutor spending countless hours mired in the school library’s sizable DVD collection. “I had to borrow equipment from other courses because my course didn’t have a big computer editing suite and no copy stands,” says Martin. “I had to borrow one from Illustration. But they couldn’t move it out of the room so I had to make my final film in the Illustration Department’s closet, during Easter break and when no one else was around.”

Settling in Seattle around 2008 Martin set about connecting with like-minded artists in the community eventually aligning herself with SEAT (Seattle Experimental Animation Team). Principally little more than an email list, SEAT was destined to be a greater creative outlet for all involved. “We realized that there were all these animators who were already living here so we said, ‘Hey why don’t we just become a group?’” says Martin. “We’d get together for potlucks and show each other what we’ve been working on or share with each other stuff that we’ve come across that we thought was really inspiring.”

Eventually SEAT would come together for a series of communal installations in local coffee shops like Zeitgeist and Arabica. Last year SEAT produced its most complicated installation in a barn as part of Susan Robb’s Long Walk public art project.

As a creative communal entity, SEAT also has access to something most would not consider a medium for animation. They share a wall.

“The wall is over there in Cal Anderson Park near the cone fountain,” says Martin. “If you look toward the red wall and you can still see the whale.” The aforementioned whale is significant and the key subject of Martin’s recent entry into Seattle International Film Festival’s “animation for adults” category.

The Whale Story from Tess Martin on Vimeo.

Shot entirely on or against the wall over the course of a mere weekend, The Whale Story was inspired by the NPR Radio Lab true-life tale about a handful of volunteers who risked their lives to free a humpback whale ensnared in a fishing net. Making the film became a multi-layered process wherein Martin utilized not only painted images shot as stop-motion but also still frames of an actor clad in snorkeling gear set against a narrative audio collage.

[/media-credit]
“Because it’s so big, I thought it would be awesome to do the The Whale Story on the wall,” says Martin. “I had this idea that I could do the whale almost life-sized and then have a real actor interacting with the painted whale. They would be near the right sizes—the right proportions.”

Tasking four other animators to help apply and shoot still frames of the actual paint, Martin had her actor and nearly ten volunteers orbit about Cal Anderson Park cajoling passersby into listening to the 11-minute Radio Lab podcast. They then recorded the parkgoers’ paraphrased version of the story for the film’s audio.

The Whale Story proved to be more than just another experiment in animation but a dynamic blend of visual and audio narrative.

“It won’t be up for much longer because my tenure on the wall is almost up,” says Martin. “The next animator is probably going to paint over it soon. It’s an animator’s wall and SEAT’s wall for a total of four years.”

Though The Whale Story took no awards at SIFF, it established Martin’s mastery over one more animation medium, an assemblage that ranges from cut paper, paint, wire figures and…sand.

“I also had another short in SIFF called Hula Hoop which was part of the Seattle Times 3 Minute Masterpiece program,” says Martin. “I decided to try sand because I had done paint and I kind of enjoyed it but I had gotten a little bit frustrated with cutouts after my film Plain Face because it took forever to make.”

Martin says cut paper is terribly time consuming because one must first design and craft the artwork, the subject of the animation, before the actual filmmaking can begin. “This was taking up so much of my energy because my passion is making the actual artwork. When it came down to the actual animation it was no longer as fun. The fun part about paint and sand is that you just have to start.”

“I actually actively try to not make my storyboards too detailed,” says Martin. “If I do have to make them, I make them as vague as possible. The advantage of sand is that you are basically falling off a cliff. You have to trust your performance under the camera and you just have to go with it. It’s more fun to just fly by the seat of your pants because if I have a detailed plan in my head the act of animation is just a rote carrying out of that plan—something that I have already edited in my head and that’s just boring.”

Martin makes her sand magic using a crude assembly comprised of a light box, an arm mounted camera and a copy stand. “It’s an old piece of photography equipment for copying photos before the days of digital. I added a wooden structure called a multi-plane that I made in college,” says Martin. “It’s just something that holds glass at different levels if I want more layers. For example, if I wanted a panning background.”

It’s a simple set-up, with the camera’s eye patched through to Martin’s laptop where the images are managed by Dragon Stop Motion software that allows her to record, review and edit unlike the old days of animation where the artist relied on a steady hand, a steely memory and the patience of Job.

As a recipient of an Artist Trust GAP Grant, a CityArtist Grant, a Puffin Foundation grant and a 4Culture Martin is seldom idle. Presently she is busy at work animating a sand sequence for Barzan, a documentary produced by Seattle-based film company, The Last Quest. The film focuses on an Iraqi immigrant accused of colluding with Al Qaeda and Martin was tasked with animating one of the film’s final sequences. In it the title character, following several years in prison, relents in his battle against Homeland Security and allows himself to be deported, abandoning home and family.

“Now he’s living life back in Iraq,” says Martin. “Basically, as I understand it, it was a situation where if you want to fight your case you will remain detained in the United States. If you accept the deportation you can go free, but you can’t come back to the States. So, actually, the scene I’m working on now is him making the decision, after five or six years, to give up and admit defeat and go back to Iraq instead of staying and fighting for the chance to live with his family.”

Far from evident in her crude thumbnail illustrations, the Barzan animated images flow and resolve in an almost mercurial fashion, the shapes and their detail are concise and defined. The sequence is stark and haunting and exquisitely done.

“For me animation really is this great balance of freedom and restriction,” says Martin. “There is a lot of stuff you can do with animation that you can’t do any other way. A regular live-action film feels a little bit restrictive in a bad way because I’m tied to this real world where I cannot make a whale appear on a wall and I can’t make inanimate objects do stuff that they wouldn’t normally do. I can’t have that magic happen.

“At the same time there are a lot of restrictions to animation. You are working in a frame by frame manner which slows you down so you‘re working in slow motion and, depending on the materials you are using, you encounter restrictions that way. Sand is very good for morphing one thing into another but it’s not so good for panning. Cut outs are the opposite. Cut outs are really good for pans, but not really good for morphing. So there are different restrictions on you that force you to be creative in how you tell the story.”

Martin says for her part animation is a joyful process wherein one creates life from, quite literally, nothing. “It’s like you’re God,” she laughs. “It’s really hard for me to watch poorly animated things because you can see where they were going but you’re not tricked; you’re not believing that this thing is real and alive. When it’s done well you are totally emotionally involved with this bunch of sand or this piece of paper.”

As an artist, Martin seeks little inspiration beyond the work itself. “I am super happy with how things are right now and if I can keep doing my work and keep getting it funded then that is pretty much it,” Martin says. “You can always have ambitions but that’s another interesting thing about this particular type of artwork, there’s no real golden goal. It’s very hard to monetize what I do so it’s not like my goal is to have my paintings be worth X amount and successfully sell a whole bunch of them consistently–that’s never going to happen. The most you can hope for is to keep getting it funded and to keep making it work.”