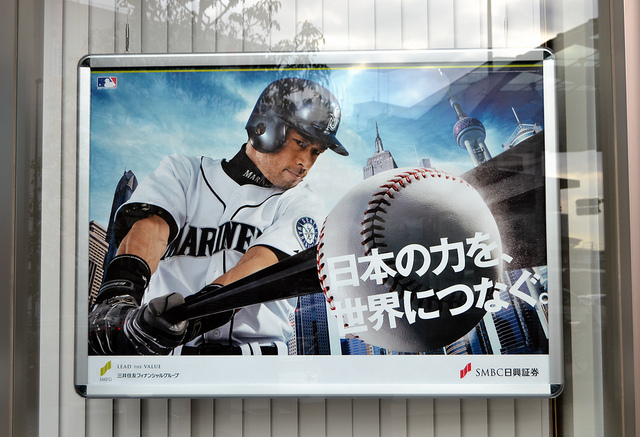 [/media-credit]
We arrived in Seattle at about the same time, and we’re the same age. We’ve both got family ties to Japan. When he arrived, he made just about as much as I did–that is, if you didn’t count the word “million” in his salary and “hundred” in mine.

But none of this explains why Ichiro Suzuki’s sudden departure from the Mariners has hit me this hard.

When I arrived in Seattle in the late 1990s, I was scared, and excited, and living all by myself for the first time. I’d moved from the San Francisco Bay Area to go to grad school at UW. While my fiancé would arrive six months later, I was living in a strange-yet-familiar city. And I felt dislocated. I felt–please remember, emphasis on the word felt–as though I was in an overwhelmingly white city.

Whenever I say this, people often bristle, both native Seattleites and other-state-expatriates alike. “What do you mean, a white city?” people ask me. “Don’t Asian Americans count as diverse?” Well, of course we count. But I’d moved to Fremont from the Bay Area, which not only felt more racially diverse, but also more integrated. And while I loved the quirkiness and charm of my new neighborhood, I was seriously creeped out by walking around and not seeing another person of color for blocks and blocks, buying groceries at QFC or PCC, eating brunch at Longshoreman’s Daughter, grabbing coffee from Still Life. I took my U-Pass seriously, and I got to know my new city by riding the bus. Over time, I found my Asian grocery stores and my Asian neighborhoods. Over time, I got to know the rich and textured tapestry of Seattle’s diversity, although it had felt segregated initially.

Then baseball season arrived, and Ichiro with it.

I had arrived in Seattle to study Asian American literature, but I’d already read John Okada’s 1956 searing novel No-No Boy: not a novel about Japanese American incarceration, but a novel about its psychological and spiritual aftermath. Chapter One begins at a bus stop “at Second and Main in Seattle,” not far from the stadium districts.

The name of its protagonist? Ichiro. Number one son.

Students of Okada’s novel probably already know that his Ichiro is in many ways the anti-hero: bitter, unfilial, practically inarticulate with rage, barely able to act or choose his path after camp. Many readers find him unlikable, and are hard-pressed to explain why he’s the center of the book. Okada only devotes a paragraph or two to the living conditions of evacuation and camp and the loyalty questionnaire that ultimately led to Ichiro’s imprisonment. Okada himself barely mentions camp in the novel, and yet camp is one of the main reasons why Ichiro is the way he is. Okada’s “angry young man” is silenced and constrained even by his creator.

That was the first Ichiro I knew.

In the late 1990s I had just come from college, growing into my Nikkei identity. At Berkeley, I’d volunteered with Japanese American community organizations, participated in Japanese American culture clubs, even took two years of Japanese classes. However, I didn’t find my way quickly to Seattle’s Chinatown/International District.

I can’t quite explain just how much it felt like home to hear a Japanese name, spoken regularly in the news. I can’t explain just how it felt to hear an entire stadium chanting that name, “Ichiro! Ichiro! Ichiro!” To see kids of all ages wearing “Ichiro” jerseys and baseball caps. To see hiragana and katakana (and Japanese-English) billboards around SoDo, to see WaMu ads and special evenings directed at a Japanese audience–all those Japanese cultural markers, all that American pride.

In that sense, Ichiro’s image was linked in my mind with my father, my cousins and uncles, the members of my Japanese American family who love baseball. Ichiro is Japanese, not Japanese American, but seeing him at the plate reminded me of those Ansel Adams pictures, taken of Japanese American players during World War II, behind barbed wire. Ichiro was a Japanese man, succeeding wildly at an all-American pastime.

So perhaps it’s a fitting, if perhaps cruel, irony that Ichiro has been traded to the Yankees: the quintessential American baseball team both in name and history. In time, I might grow up and see that move as a positive one. For now, I will miss that sense of my Nikkei self that he represented, rooted in a city I’d finally grown to love as American and Asian American.