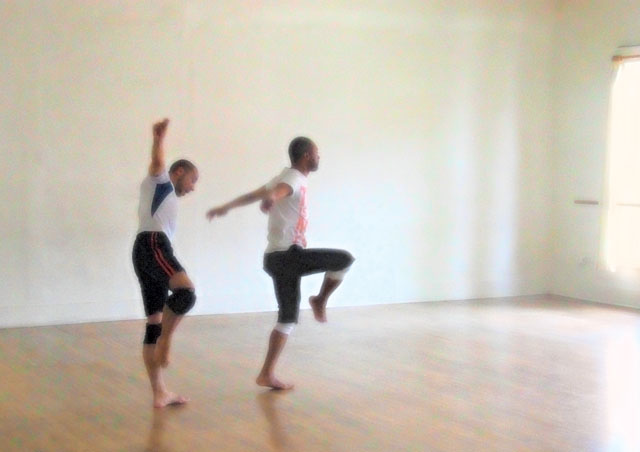 Continuing the month-long focus on Working Artist Paige Barnes, I am struck by how much there is to say about her. Ms. Barnes has been popping up everywhere lately. Whether as a member of Vanessa deWolf’s Score for an Unrehearsed Ensemble or individually dancing at impromptu events in Kaleidoscope Vision’s shopfront or Teatro de la Psychomachia’s attic, she has shown a penchant for keeping busy, even in the most untraditional of spaces.

Still, she always returns to Open Flight Studio, which she co-founded in 2002-2003. A space for performance-based artists to research, experiment, develop, teach and perform, Open Flight Studio nestles quietly in the heart of U District and offers Seattle’s performing artists an affordable and under-utilized space to work out their ideas. I caught up with Ms. Barnes at Open Flight Studio in rehearsal for her new dance work, Lead Bunny.

Part 2: In the Studio

After teaching three days a week at Gyrotonic Seattle and being a student three nights a week, somewhere in there, Paige Barnes finds the time to run the Open Flight Studio in the U District. Open Flight Studio has hosted for the past three years the experimental dance/music improvisation series HERE/NOW at a quarterly frequency, as well as classes in African dance, capoeira and modern dance. Beyond those aspects however, Open Flight Studio also provides the extremely valuable service of offering an affordable space in a prime location near the University of Washington.

Open Flight Studio is a new idea for a rather old building. Looking around the studio, one can feel the history emanating from the walls. This is the former Martha Nishitani Modern Dance Studio, after all. Named by the International Encyclopedia of Dance as one of the five most important teachers of children’s dance in the world, Martha Nishitani was largely responsible for the growth of modern dance in the Pacific Northwest. Ms. Nishitani opened her dance studio here in 1954 and brought various luminaries of the dance world such as Merce Cunningham through her doors as both teachers and performers in order to cultivate a passion for modern dance that the city still enjoys today. Ms. Nishitani used to line the walls of her studio with portraits of all her guests and also her own students and her dance company at work on films like Water Images and Transit Into Dormancy, to remind everyone who entered the studio of the rich heritage of modern dance in Seattle.

The photos on the wall are gone but the space still holds its importance. When Ms. Nishitani retired in 2002, the city was in danger of losing one of its most renown performance spaces–and this at a time when performance spaces in Seattle were already becoming a premium. Paige Barnes decided that this was an opportunity.

“I received a mass email from Sandi Kurtz,” says Ms. Barnes. “That Martha Nishitani was retiring and how she would hate to see the space transform into a non-dance space because it had been a space for dance since the 1950’s. I called up BetterBiscuit and Cheronne Wong and asked if they would like to partner with us to take over that space. We also asked Rockhopper to join as well. Between all of us, we had enough skill and workforce to go in and renovate the place and open a studio that at first was there to serve our own creative needs while simultaneously providing a space for the community.”

BetterBiscuit Dance, Rockhopper and Cheronne Wong have since moved on to other ventures, leaving Ms. Barnes as the sole remaining founding member. Since then it has grown even more to accommodate other ventures beyond simply being a rehearsal studio.

“In 2008, I was at a frustrating point with showing my work in Seattle. I had created work in both series that Velocity and On the Boards offered and did not know what to do next. I wasn’t being produced on a larger scale and I was inspired by individuals such as Vanessa DeWolf who runs a space called Studio Current, who has created an underground fringe academic program, so to speak, for performing artists where rich discussions, performance experiments and workshops take place.

“At this time, I met Christopher Hydinger. He saw the OFS space and said ‘Paige, that is an incredible space, why don’t you create work in your own place?’ So I started to re-invest in OFS and spend money to make minor upgrades. The conversations around empowering my work with the space that I have led to the Ayudapii series and HERE/NOW.”

Personal projects and personal desires may have been at the origin of the Open Flight studio but the studio has gone far beyond an individual play space to become a real place the community may use, and a real place in which community may be constructed from scratch.

“We provide affordable space,” muses Ms. Barnes. “The benefit to the community was in response to my own personal need and I guess being an individual artist, I am reflecting the needs of many too. As a result opening up this space has helped to fulfill a need in Seattle.

“It is a quiet space and while you work, you are not interrupted. It is a neutral place that can easily mutate to the needs of the individual. This is a quality that I am really seeing play out over the past few years. It can easily transform based off the intentions of the artists. Now I hope that individuals use it even more as an experimental performance space, and some folks have been. For instance, Marissa Niederhauser and Stephanie Skura have held performances there this past year.”

Ms. Barnes herself is currently sharing the space for her own projects. At present she is working on her upcoming gallery film installation, Lead Bunny, opening at the Hedreen Gallery in October. From Ms. Barnes’ own notes:

Animator Stefan Gruber creates “lead bunnies” – creatures that fill up with lead, and then leak it. When they are hollow they are blind and without roots; when they are full they are grounded. Recorded sound of field recordings and found sounds strategically placed in the gallery space transforms the audio landscape. The rabbits and sound create the emotional subtext of the work and surround five dancers. A modern hymn sung live by Bob Barraza while keeping time with a wood metronome invokes a ritual that brings an individual to a higher consciousness and isolates them. Headpieces and masks made by Ret Harrison will limit vision and cover the faces expressing anonymity. Documentary filmmaker Aileen Imperial is filming the entire creative process: the rehearsals and the lives of the choreographer and the ensemble. She will create multiple video “shorts,” which will be the substance of the free gallery installation.

I watch her rehearsal on this sunny Seattle day. Her dancers today are the lovely Alice Gosti, Pol Rosenthal and Vincent Cuny. Rehearsing a surreal scene, they attack the space with animal forms, archetypal sounds and pure grace as they try to break through the other side. About halfway through the rehearsal, Vincent Cuny turns to Ms. Barnes and says, “Does this movement make sense? It’s kind of weird, dreamy.” She smiles and says with a hint of irony, “I’m not sure how much sense it’s supposed to make. Everything is pretty weird and dreamish right now, drawing all these images from the subconscious. Maybe it’ll make more sense to the audience than us!”

It is a perfect project in a way for Open Flight Studio. Virtually everything I have seen at Open Flight has been interdisciplinary, combining music with dance or dance with film and sculpture. Though it is not designed to be performed here, nevertheless Lead Bunny seems to have found the right incubator.

One of the great frustrations for artists who work across categories is often that support, both social and financial, often relies upon labels. There are certainly people who, if told something were “theater” rather than “dance,” would receive the artist’s work tepidly. There are probably even more people who, if told something were “dance” rather than “visual art” or “film,” would probably withdraw support completely. Applications for grants and even the support of friends often relies upon being able glibly to categorize and label one’s work for easy consumption. When people simply do not know how to label them, artists suffer from the ignorance.

Ms. Barnes’ perspective now aligns clearly with her fellow artists. Open Flight Studio is open to all aspects of performance art, dance, theater, music–whatever Ms. Barnes happens to be interested in at the time–and this is a woman of many interests. Her studio allows a way to return artists to their own personal quests, without worrying about support from grants doled out by bureaucrats or the caprice of individual sponsors who only wish to be associated with sponsoring one particular type of art. “My hope,” she says, “is that it is used for research and performance of performance based work that is on the fringe of the its own genre: unusual, unique to the current cultural moment, personal, unapologetic and conscious.”

Ms. Barnes holds the lease on Open Flight Studio until at least 2016. It continues to grow as a space as its ever-changing core of partners themselves grow and change. But it is there. Maintaining any sort of space in contemporary Seattle is an extraordinary challenge in itself. But Paige Barnes realizes how special it is. I asked her about her plans for her work in the future. Every answer came back to Open Flight Studio, and I asked her why. Her reason was simple:

“I can’t imagine my life without this space.”

Fortunately for Seattle’s performing arts community, she doesn’t have to.