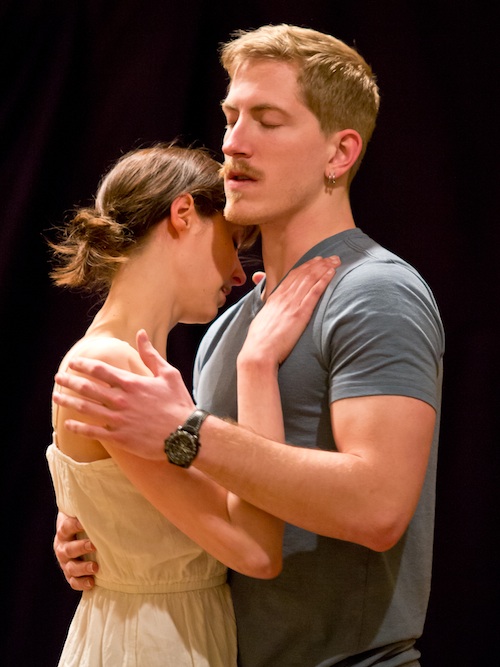 I say that symbols are nothing but the natural speech of drama. — Tennessee Williams, foreword to Camino Real

In American theater naturalism is generally accepted as the de facto One True Theater. How deep this prejudice runs is often surprising but always painful. Consider the career of Tennessee Williams. Known for two of the most famous plays in American theater, A Streetcar Named Desire and Cat on a Hot Tin Roof, he was acclaimed in 1962 as “the man who is the greatest living playwright in the Western world” by Time magazine. Within seven years, that same magazine was putting him on the front cover with the headline “Played Out?” and in their sister magazine, Life, Stefan Kanfer was accusing the playwright of infantile regression. His later plays were, with the possible exception of Small Craft Warnings, critical and commercial disasters.

What happened in those seven years to take Williams’ reputation from zenith to nadir so swiftly was that his plays began to abandon all pretense of naturalism–or, as people like to call it “realism.”  Tennessee Williams built his reputation on works that critics and audiences regularly called “lyrical” and “poetic” yet always, above all, “realistic.” To turn away from realism was seen as the greatest heresy. The later plays of Williams, by which critics mean anything after Night of the Iguana, are primarily non-realistic. Therefore by conventional wisdom they are disastrous.

Witness Walter Kerr writing a personal letter to Williams to warn him against ever leaving the sacred grove of realism:

What worries me about Camino Real is not what you want to say but the direction in which you, as an artist, are moving. You’re heading toward the cerebral; don’t do it. What makes you an artist of the first rank is your intuitive gift for penetrating reality, without junking reality in the process; an intuitive artist starts with the recognizable surface of things and burrows in. Don’t swap this for the conscious, rational processes of the analyst, the symbolist, the abstract thinker.

In other words: don’t dare give us your thoughts, give us your illusions. We love superficial resemblances and above all we love recognizability. This calls to mind George Jean Nathan’s elegant quip that realism is the doctrine that what you already know (“the recognizable surface of things”) is inherently superior to what you don’t (analysis, symbols, abstraction).

Now Walter Kerr is of course one of the greatest Philistines in theater history but even more sensitive critics than he have offered the same caution. Brooks Atkinson, Robert Brustein, Richard Gilman have all said similar things. Their consensus at the time, which remains largely the consensus today, is that Williams is one of the finest writers of dramatic prose, gifted with an ear for the poetry of realistic dialogue–and he should stick to realism.

Yet poetry is not realistic. Poetry relies upon symbols and where it does not draw on symbols, it creates them. As a poet himself, Williams knew this. In truth even Williams’ earlier plays often skew away from realism toward the conscious and the symbolist. Even the supposed realism of Streetcar wraps up ever so deftly with one of the dumbest bits of symbolism in modern theater. It is these symbolist moments that people find “lyrical” or “poetic” about much of Williams’ drama, but those symbols exist simultaneously alongside a nominal realism. The later plays abandon this formula. They dance on a permeable border between realism and non-realism, and often step (as Camino Real does) completely over the line.

Suddenly Last Summer belongs very much to that borderland. Allegedly realistic on the surface, any serious reading of it will show it to be filled with none-too-subtle symbols and conscious allusions to past drama. Even more obviously is that there is virtually no real dialogue, certainly not by 1950s naturalist standards, and there is no three-act structure because, as my fellow critic Michael Strangeways jokes, “There’s no ending.”

Director Charles Waxberg clearly understands this play. I just think he wants it to be more, or other, than it is. In this Theater 9/12 version, he interprets it as a drama in which the oppressed and estranged fight back against the privileged and the elite. The challenge of convincing an audience of such an interpretation is that there is precious little evidence for it in the text. Outside of the final scene, in fact, there is nothing.

Even more problematic is that the final scene is not half so much a visualization of the phrase “eat the rich” as Mr. Waxberg wants to force it to be. It is a reference to The Bacchae of Euripides. This should come as no surprise to anyone who has read Williams’ earlier comedy The Rose Tattoo, which is also about Dionysian rites. Sebastian Venable is not torn limb from limb because he is wealthy. He is torn limb from limb because like Pentheus in the Bacchae he is ultimately an unbeliever. He rejects what the little boys have to offer him, which in this case is sexual favor.

Witness the names: The scene occurs in Playa San Sebastian; the character is Sebastian, both named after the saint. The homosexual symbolism could hardly be more blatant. Furthermore, Sebastian as a saint was also said to represent “the Apollonian ideal of beauty”–a quote from Thomas Mann’s Death in Venice, with which Williams was intimately familiar, since he rewrote the story himself in 1941 as “The Mysteries of the Joy Rio.” And for those Nietzscheans out there: Apollo versus Dionysus = Birth of Tragedy. Williams may be heading away from realism toward symbolism but his symbolism is subtle in the manner of an anvil on the head.

Suddenly Last Summer is not to me primarily a naturalistic play. It is symbolism surrounding naturalism and intending to asphyxiate it. Yet the American fetish with realism and the reputation of the playwright virtually force an audience to consider it as another “Tennessee Williams play”–that is, filled with Southern Gothic, melodrama, single-minded sexual motivations, slightly unhinged Southern belles in costume parades and, above all else, realism. Unless a director and cast actively work against this, the play will bury them.

The cast for the most part approach it in purely realistic fashion. I think this is a slight mistake. It isn’t that they aren’t good at it. This is one of the finest casts I have seen in awhile. There are few actresses in Seattle as strong as Sarah Milici in full-blown neurotic Southern belle regalia. Joey Fechtel makes a convincing case for Dr. Cukrowicz as a real human being instead of the cipher that is written on the page. Eric Olson overplays the physical business a bit much for my taste but he is more than credible as a real person and Lisa Carswell as Mrs. Venable is fantastic as usual. But the text they are given regularly shifts in tone from banality to rhapsody: this is not semi-poetic realism, it is semi-realistic poetry and requires a poetic approach. Even the structure of the play, essentially two monologues surrounding a nebulous discussion of science versus religion argues for a poetic approach. Mr. Waxberg seems to sense this but then he breaks the symmetrical structure of the play with an intermission, which also breaks the cumulative effect of the rhapsodic rhythm of the words, which in turn saps them of poetry. Imagine:

The apparition of these faces in the crowd–

…and now, a short intermission…

Petals on a wet, black bough.

You can see the problem. The second monologue depends as much upon the immediate juxtaposition of the first as the second line of Pound’s poem depends on the first. Catharine’s monologue concerning the truth that has driven her mad requires the immediate juxtaposition of Mrs. Venable’s monologue of the lies that have kept her sane. True, there is a bit of pasteboard and starched milk filling in the middle of Williams’ poetry, but that is his obeisance to realism (a nod, I think, to Cat on a Hot Tin Roof) because his commercial viability depended upon that realism. The play would hardly suffer if it were omitted completely.

I’m not sure why Mr. Waxberg goes with the interpretation he does. He makes no attempt to diminish the homosexual theme. But he makes no attempt to call attention to it, either. I do not suggest that this is the only theme of the play, nor even the main theme of the play. I only suggest it is a larger theme, and greater in this piece, than the struggle of working class against privilege. While it is true that Mrs. Venable represents old money and the idea that anything can be purchased–silence in this case–and the impoverished family are willing to sell out their “sister” for money, the argument that this is a play about the haves and have-nots is, to my ears, insufficient to convince.

Such are the difficulties of such a play. Superficially familiar, it quickly becomes strange but only if one accepts it on its own terms. I am not arguing here for the superiority of realism or non-realism. But some plays are more one than the other. Some, like Suddenly Last Summer, alternate quickly between both without warning, just as they reach their end without actually ending. Such plays require an approach that one rarely sees on the American stage. On the American stage naturalism is more than a crutch: it is an anchor that prevents actors and audiences alike from true exploration.