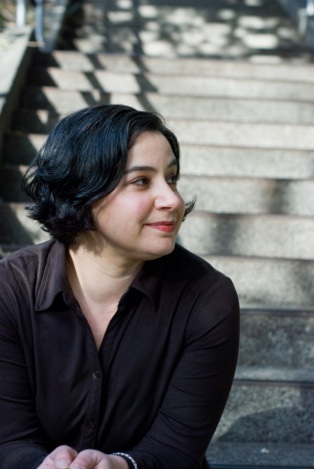 Software that allows people to e-mail (and even video chat) with their loved ones who have died? That’s the premise behind Seattle author Laurie Frankel’s second novel, Goodbye For Now, which comes out August 7th. And on August 10th, Frankel’s having a book release party (complete with live music, food, and party favors) at Elliott Bay Books.

But beneath the “wouldn’t it be cool”-ness, and (dare I say, with affection) the geekiness of the novel’s premise, make no mistake: Goodbye for Now contains profound insights about love, loss, grief, and memory. And she offers these insights with her characteristic wit, coupled with her genuine affection for human foibles. In one climactic scene, two characters are in tears and they’re not “the gentle, graceful, Mary-Mother-of-God kind that slip quietly down holy cheeks and would have been appropriate for the occasion. More like the end of King Lear.” That’s the voice which appealed to so many readers of Frankel’s first novel, The Atlas of Love.

Pre-release, Frankel’s second book is already being translated into several languages, and has already been optioned for film. And it’s easy to see why. Goodbye For Now is a novel that explores what’s lurking beneath our now: it explores the role of technology, social media in our hereafter, our afterlives.

Seattle Star: Congratulations on the early praise for Goodbye for Now! It’s well-deserved. (I cried. A bit. And people who know me know that I hate crying.) But I loved it.

Laurie Frankel: Thank you so much. It did turn out a little sadder than I intended. Not my fault — these things happen without my consent.

SS: You’ve written two novels now, both based in Seattle, but I know you’re an East Coast girl at heart. Do you see your East Coast identity or perspectives emerging in your work?

LF: I don’t know about my East Coast identity coming through (you’d have to ask someone else because I never see it, but other people notice it about me all the time. I really have no idea how), but I do feel like I write about Seattle as a tourist, at least as the Seattle-newbie I still feel like I am. I’ve been here for eight years now, but what I love about Seattle remains what I was so taken with in week one. I love Pike Place Market. I love the proximity and constant presence of the water and the mountains. Every day in the summer I am struck anew by how great the weather is, how much daylight, how much blue sky. And then the rain, oh the rain. I think you have to grow up in it not to feel that constant drip of water wearing away your soul like the Colorado does the Grand Canyon. I’m not over the wonder of any of it yet, and I feel like that’s the Seattle I write.

SS: One of the things I appreciated most about Goodbye For Now is how it takes grief out of the self-help or religion/spirituality aisles into comedy, tragedy, and, well, fiction. And it’s a novel that deals so intelligently with grief. For example, so many books about grief seem to focus on a linear, upward journey and a single, cathartic event. This book shakes up that trajectory (there are back-to-back chapters titled,”It Was Not Cathartic” and “Okay, It Was A Little Cathartic”). Can you talk a bit about what helped you unearth these insights?

LF: Those are my two favorite chapter titles in the whole book. My agent warned me when I pitched her the idea that depressing books about death don’t sell. I kept assuring her it was about death but it wasn’t depressing. Largely, the characters unearthed their own insights. TheRePosers [software users] come in to mourn their dead loved ones, but then they make all this new life together. They move on and heal, a little bit because of the tech, but also they become friends and build lives together, learn from one another, grow together. I knew going in that I wanted them to become family and community. In getting them from broken to healing, from alone to supported, in making that trajectory believable, I discovered ways of thinking about grief outside the traditional. Death is often the climax of novels or their starting point. Here, it weaves all the way through, so the approach had to be different.

SS: As the software platform in the novel evolves, the ethical dimensions of allowing people to communicate with “the dead” (or their avatars) also start to emerge. Did you start to watch in horror as the platform evolved, or did you know where it was headed all along? Without giving too much away, what surprised you?

LF: If this technology existed, I’d use it for sure. No question. But the more people I talk to, the more people I meet who say, “Why would anyone want to use this?” That surprised me, and that’s how I knew it would make a good book — conflict and ambiguity and shades of grey and all that. The (fictional) religious press’s objections to the technology were immediately clear to me. The (fictional) mainstream press surprised me — their accusation that users are being duped and taken advantage of, their objection that it isn’t fair that only some people can afford this service and so there’s a division thus created between how the haves and the have-nots mourn. I wish there’d been more time to explore all of that in the book.

SS: Book clubs are probably going to ask something like this question, so let’s get them the answer. One of the characters, Meredith, loves to build and display model airplanes. How did the idea of the model airplanes come to you? Why airplanes, instead of (say) letterpresses or postage stamps?

LF: Honestly, I gave her that hobby so they’d have something pretty to put on the book cover. And they did. I’m thrilled. Skies, clouds, airplanes, flight…these all make for good metaphors and lend themselves to covers, websites, super cute favors I’m making to give out at readings. That she built model airplanes and hung them all over the ceilings was the first thing I knew about Meredith — the rest of her springs from that detail rather than the other way around.

SS: As I was reading the book, I was thinking about Audrey Niffenegger’s novel The Time Traveler’s Wife (a book I also love), because its central focus is not really the “gimmick,” or the mechanisms of the character’s time travel. That novel’s central focus is the love between the couple, as I think it is in Goodbye for Now. How did you manage to balance the logistical ins and outs of RePose with the characters’ needs to explore grief and loss?

LF: Well first answer: I hate gimmicky books, so thanks for saying this. Second of all: editing. At first, I was preoccupied with the technology and explaining it, justifying that it was possible and internally consistent, playing out all the issues that it raises. Eventually I realized that no one really cares. Maybe if I go do a reading at Google or Facebook or something, there will be someone there who nitpicks the (vetted by my software engineering husband) tech. But most people read novels for the story, the characters, the prose, the software genius’s everyday life, so with each draft, those got more foregrounded and the logistics fell away.

SS: And a lighter note: any thoughts on the M’s or Orioles baseball seasons?

LF: I mean the Orioles. Holy cow. The Orioles are having their best season since the mid-90s. The Orioles were supposed to be truly awful, not just in last place but painful to watch. This has certainly been true for years now. They play well in April, poorly in May and June, and then after the All-Star Break it’s like they just give up and phone in this horrible, sloppy, defeated mess. This year they are actually in contention. Still. And it’s August. It’s been such a treat. I almost can’t believe it.

And the poor Mariners. It’s not been a great season. Again. And they lost Ichiro, which was heartbreaking. And it turns out that Safeco depresses offensive — I am a girl who likes pitchers’ duels, and even I find it pretty depressing. But they soldier on. They’re playing decent ball. I still listen every night. And the beauty of it all is this: when I want to go to a game (and can get babysitting), there are always tickets available.