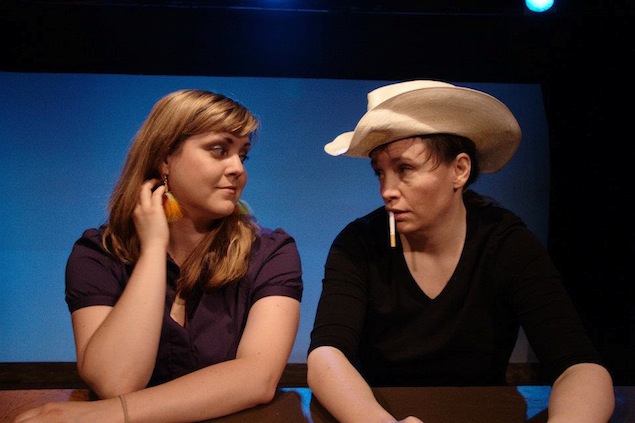 [/media-credit]Let’s speak plainly, I would love to unpack this production in the manner with which I’m accustomed to, but the text presents something of a challenge. Let’s back up for a bit: The Summer months in Seattle mean one or two things for theater companies, outdoor shows and light fare. This year, ACT and the Intiman are bucking this trend with their Pinter and Summer Festivals, respectively (in Intiman’s case I’m including their production of Hedda Gabler, though some will argue for their entire slate), but if you look elsewhere on our stages it’s Shakespeare, kid-friendly originals and silly, silly fluff.

The Kathy & Mo Show: Parallel Lives, currently being produced by Theater Schmeater, was written by Kathy Najimy and Mo Gaffney back in 1989, which makes the play old enough to be considered a chestnut. They play was a huge success for its original stars, landing them and the show on HBO for a 1991 special. The premise of the show is simple: These are the lives of women who aren’t you. This is presented as a series of vignettes, pantomimes and character moments using stock character types (the ardent and strident womyn artistes, the old biddies out on a night of fun, the average woman goes through her morning routine, etc.). The play is generally produced when a company wants to program something light and harmless, and have access to versatile actresses with comedic timing; ergo, the Schmee’s production.

The script hasn’t aged well. Also, its strength is that it’s a classic Borscht Belt comedy, which is also its weakness. That’s overstating it a little. The script does provide an opportunity for actresses to flex their muscles over a variety of characters, which is rare and one of the reasons it’s produced as often as it is. However, it is as toothless as any of the Greater Tuna plays: there is the argument that not everything has to have Meaning, but even by those standards, Lives has exceedingly little to say. Its portrayals of aged women sharing stories of how accepting they are of their gay male relatives and friends (it’s always gay males) might have been endearing and brisk when it was originally produced, but today it comes across as a very nice and cloying sentiment shared with the converted. It isn’t without its barbs–such as an extended gag-fest about Catholicism, and a scene about a Pro-Life protester which provides a tense mood that is welcome and incongruent–but these are fleeting moments.

If there’s joy to be found here, it’s in the work done by director Kerry Christiansen and her lead actresses (Megan Ahiers and Jennifer Chadwick) to bring life to the material. Lives gives Ahiers an opportunity to display her knack for comedic character work, and Chadwick matches her beat for beat. It is difficult not to be enamored with them and impressed with their dedication and effort to the material. There are numerous times throughout the performance where this trio connect with a moment in just the right way (Chadwick’s solo vignette with the morning routine and drunken louche at a honky tonk; Ahiers’ motor-mouthed Latina and grief-bemused bulimic, for example) leading to some solid laughs, but the material surrounding these performances… There may be those for whom this is nourishing and refreshing; but it’s as nutritionally rewarding as tapioca, or whey.

This production illustrates the dearth of canonical material there is for women, particularly comedic women, in our theater. Thankfully, our city is blessed with a number of companies where local female writers can develop material. One wishes they were commissioned and produced more often, so we could stop relying on tired “proven” material to give these artists an outlet.