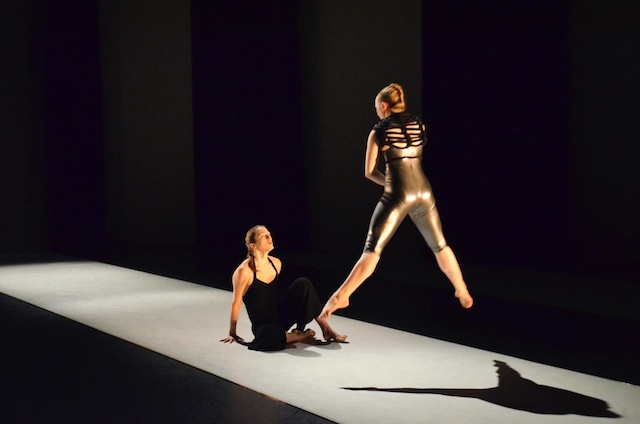 “If life is a game of cards, we are born without knowledge of the rules yet we must play our own hand.”

The set is stark, with alternating strips of darkness and light: the floor strips lie diagonally across the stage, the background wall stripes straight up and down. The dancer, Catherine Cabeen, sits cross-legged reading Tarot cards at the front of the floor. An amorphous blob of metallic foil, gold and silver, with irregular bumps lies semicircular around her. A dark-toned female voice reads impressionistic text over the speakers, concerning cards, living, art. Soon four dancers emerge from beneath the foil like creatures from the dancer’s subconscious and over the next few minutes they take over the stage as Ms. Cabeen takes their place, swallowed by the foil.

So begins Catherine Cabeen and Company’s Fire! The basic structure for the evening has been set: the solo artist, separated from herself, confronts the archetypes in her subconscious. The dancing is beautiful, especially the duos between Karena Birk and Ella Mahler, the asymmetrical trio and duo groupings and the solos of Ms. Cabeen herself, who is obviously one of the finest dancers in the country. Her choreography is brilliant as it explores possible combinations of the tarot-based imagery. The costumes are exquisite, each a subtle variation on the black web and the black stripes that underpin the stage imagery.

At the end of her piece Into the Void, her exploration into the gender issues raised by the work of Yves Klein (especially the Anthropométries), Ms. Cabeen had plumbed the psychic depths of Klein, submerged herself in his self, danced with him, and released herself. Niki de Saint Phalle, I think, has not released her. This piece has acceptance but no real reconciliation. This may have to do with the fact that Klein is male and de Saint Phalle is female; it may be easier to release the feminine from the masculine but it may be a much, much more difficult thing to release the feminine from itself.

I think this is ultimately where Ms. Cabeen struggles in this piece. In Ready, Aim… last June at On the Boards, Ms. Cabeen performed a solo piece that intended to invoke the tactic of violence latent in de Saint Phalle’s shooting paintings, inviting the audience, too, to engage in violence against the dancer’s body by throwing multicolored pieces of paper at her.

Despite it all, the violence of that evening never felt completely released. Partly this had to do with an inherent safety in the process: there was never any palpable danger to the dancer or the audience. But also it was because such violence cannot be completely released from the process. Insofar as classical ballet and its various oppressive qualities remain most dancers’ original experience of the form, a certain amount of violence remains embedded in a dancer’s training and thus her identity. In another quite real way, the nature of feminine violence remains present in de Saint Phalle’s work and begging to be resolved. One cannot simply chalk it up to the male oppression of women: this destructive energy may very well be yang energy but it is in no way necessarily male. Ready, Aim… does not resolve this conundrum and neither does Fire.

Originally Ms. Cabeen told me that Fire! would “wrestle with the idea of creation through destruction.” But nowhere in Fire! will one find the roughness of a subject who says such things as:

“I wanted to forgive my father for trying to make me his mistress when I was 11. I found only rage, passionate hate and imaginative revenge in my heart. I was so angry with you, Father, disappointed and scared.”

“I was ready to kill. As victims I chose my own paintings.”

“The painting is the victim. It is bleeding, it is wounded, the way people can be wounded.”

Ms. Cabeen has told me on more than one occasion that she is not sure she even likes the work of de Saint Phalle, and that mostly it scares her. Watching her dance, however, one would never know. Her technique is so clean, her conception for the whole evening so spare, so controlled that it works against any pretense of destruction. As André Blas notes in his documentary on Niki de Saint Phalle, after de Saint Phalle released her rage through the shooting paintings anything was possible, but what followed was pain and suffering. It is here I think that Ms. Cabeen begins–and ends.

Obviously Niki de Saint Phalle is a complex woman and artist. I do not expect any single work of art to encompass her essence. Ms. Cabeen in Fire! has concentrated on confronting the archetype figures of de Saint Phalle’s Nana pieces with a modest nod to the Tirs paintings (referred to obliquely in Susie J Lee’s media design projections at the rear of the stage) . This is a fine enough goal, and certainly a lovely addition to her impressive catalog of work. Still, I find myself wishing she would go even further. I should very much like to see her confront that fear she has largely elided in this piece. In the original version of Fire! I saw earlier last year, some of that fear and doubt remained. In this version it has gone into hiding, which is why I have a suspicion that it will reappear–soon–in Ms. Cabeen’s work.