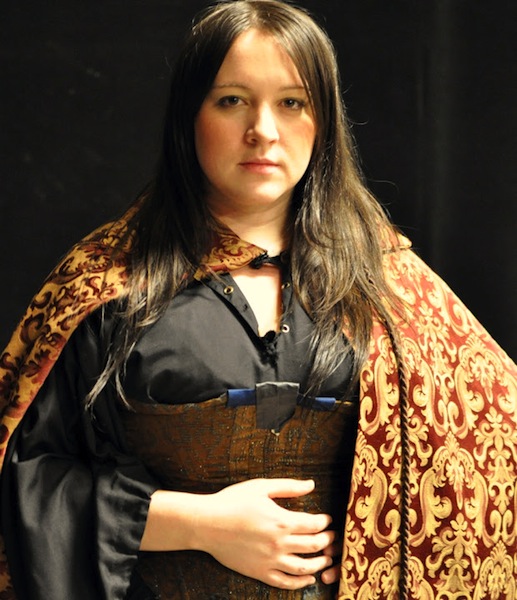 Seattle Star readers know that I have called in the past for more Shakespeare productions. The larger point of that essay of course went completely unnoticed, which is: it’s not about Shakespeare. It’s about the ethos of trying everything in the book, no matter how stupid, and praying something sticks, when the real ethos should be trying something well-considered and daring to fail miserably. What a surprise that in the notoriously reactionary and anti-intellectual theater of Seattle such an idea should go completely over people’s heads. Classical theater in Seattle has neither learned how to fail nor has any interest in doing so. It remains safe, timid, bloodless and fundamentally empty-headed.

At first blush it might seem as though Ghost Light Theatricals’ version of Hamlet is a big risk, an edgy “choice.” Whoa, dude, gender-swapped Hamlet? What a profound statement about gender inequality! What a risky approach to analyzing the current power structures of contemporary America! I wonder what will happen. How does the play change if men are archetypes and women are the decision makers?

Such is the question director Beth Raas-Berquist has asked. The answer returns swiftly: it still bores. It still poses unsolved problems of poetic text. It still raises the unresolved problem of interpretation. It still makes audience members nod off.

The problem with so many adaptations of Shakespeare is that beyond the initial Bright Idea–Gee, Brain, where shall we set Shakespeare tonight?–they fail to scrape the surface of the actual text itself and bother to find a coherent interpretation. The gender-swapped Hamlet is no different. Once the director made her “choice” she forgot the resolve the whole problem of What the hell is this play about, really? Is it about aggressive females and weak males? Because if it is, that point is made in about fifteen minutes and then remain three hours of dramatic padding to sort out.

Other questions remain. Who the hell is Fortinbras and why does he show up in the last minute of the play other than to deliver a trite speech about taking up the bodies? How does Polonius touch the royal crown without getting her goddamned hands cut off? What exactly in this play is supposed to be funny and what serious? Is there a difference between prose and verse when spoken? Why have pentameters suddenly turned into defective alexandrines and iambs turned into dactyls? Enquiring minds want to know.

Ms. Raas-Berquist’s idea for Hamlet is not only ill-considered, it is superficial. For the sake of argument, let’s assume that the world of Denmark is ruled by women. What does this mean, really? Will women impose the same taboos as men? The answer, according to virtually all anthropologists, is no, and one of the taboos that matrifocal cultures treat differently from cultures of male-preference primogeniture happens to be murder. Matriarchal cultures such as the Mosuo do not even have words for murder or rape. So what type of matriarchy is this? Are they faux Minoan, battle axe wielding warriors? If so, why are they carrying around the extremely phallic weapons of the sword and dagger? Is this a shame-based culture or a guilt-based culture? Matriarchies tend to be shame-based. But if it is a shame-based culture, then there is no such thing as revenge. And if this is a true shame-based matriarchy, not only is there no revenge or honor, there is no incest taboo. Since the party line interpretation of Hamlet is that it is, like, a play about revenge and honor and an incest wish and stuff, what remains?

I doubt Ms. Raas-Berquist asked half of these questions. But she should have. Audiences are entitled to play that has been interpreted. Having gone just so far with her “big choice,” Ms. Raas-Berquist fails to go any farther. But a choice is not an interpretation. An interpretation requires that an idea be pursued. Gender-swapping Hamlet is not an idea; it is merely a conceit. Nothing builds on this conceit. This production is merely proof once again that it is easy to be consistent but difficult to be consistent to the bitter end. The extreme inconsistency of the production–in clothing, in versification, in attitudes, in social structure–defies an audience to make sense of it all. The difference between good Shakespeare and bad Shakespeare is that one makes sense and the other doesn’t. The rest is moot, and in this case, the rest remains to be plumbed.

What is true for the audience is no less true for the cast. It is obvious at many places the actors are quite lost about where to place emotion and why, about what is poetic, about what is pointed–even about the entire idea of social space and proxemics. While I can watch Dayo Anderson in anything and still feel reasonably pleased, and while I have loved watching Taryn Pearce since her turn in Dead Man’s Cell Phone, most of the cast look to be on the hunt for a leader. But this leader will not appear.