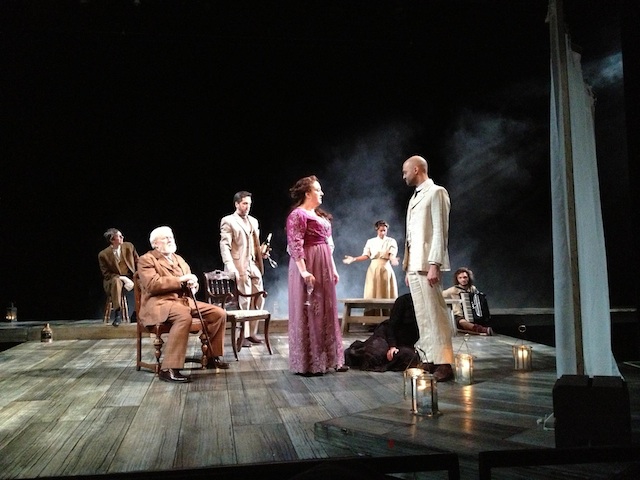 From Petersburg I get painful letters, as it were from the damned, and it’s painful to me as I don’t know what to answer, how to behave. Yes, life when it is not a psychological invention is a difficult business…. — Anton Pavlovich Chekhov, Letters of Anton Chekhov

Over the past few years productions of Chekhov grew steadily worse, the painful Intiman production of Uncle Vanya being for me the cyclical nadir, until smaller groups like Pony World finally blew off some of the dust with Suffering Inc. and similar efforts. Even earlier, however, were occasional outstanding projects, where Chekhov was not treated with the tincture of classical dullness so typical of Seattle productions and offered to the public as a cozy three hour nap in cushioned seats.

If anything, The Seagull Project’s production of The Seagull at A Contemporary Theatre shares its spiritual roots with the 2006 Seattle Novyi Theatre production of the same play. Their approach to text is similar. Both are anchored in the “Stanislavski system.” Where the Novyi production was despite its international cast clearly Russian (its Meyerhold-derived approach to staging is subtle but distinct), the Seagull Project’s version is American to the core. With its relentless concentration on the actor and character, the American approach at its best pares away the costume drama rind and revitalizes the action on stage, making it immediate and modern.

The Seagull Project’s Chekhov is the American approach at its very best. It goes well beyond the stereotypes of “The Method.” Here the focus is completely on the acting and making fresh choices of characterization. Director John Langs has at his disposal an extraordinary cast. They are completely light on their feet in the best possible way: every action and reaction is so beautifully natural and unforced that one can see easily why the Stanislavskian approach to realism remains inspirational to this day. It is a tour de force of psychological invention, lively yet seemingly effortless. Upon watching such a brilliant cast, one wonders if anyone could ever possibly approach the roles any differently without seeming phony.

While the cliché view of Chekhov’s plays is that they are wallowing, depressing, ultimately boring in their seriousness, the author himself referred to them as comedies. In this production, the comedy comes back to life without ever seeming exaggerated and stupid. The actors here find levels of wit and even-handed farce that are invisible in most Chekhovian performance. Peter Crook’s turn as Dr. Yevgeny Dorn and Mark Jenkins’ Peter Sorin are masterpieces of restraint and the anchor for the satire.

Against their subtle work play out the qualities that Chekhov called “no action and five tones of love.” Semyon Semyonovich Medvedenko loves Masha without requite. Masha loves Kostya without requite. Kostya loves Nina without requite. Nina loves Trigorin, who dumps her. Trigorin loves nothing but angling yet stays with Madame Treplyev. Madame Treplyev loves herself and her fame. As an ensemble they are impeccable. CT Doescher, Hannah Victoria Franklin, Brandon Simmons, Alexandra Tavares, John Bogar and Julie Briskman play this understated rondo to the hilt and simply let the comedy occur rather than trying to convince the audience of it. It is all the better for this.

That it is satire and largely comic does not mean it is not serious–quite the opposite. This is a project undertaken in dead seriousness. Yet it lives. The stage comes alive in this production: it is easy to forget one is watching a structured play rather than life itself. This should be the aim of any piece that pretends toward naturalism, yet a casual survey of similar productions will show exactly how far they are from this goal.

The choice of Carol Rocamora’s translation for the play aids the production in their goal. I have my problems with it–no translation is complete–but Ms. Rocamora herself is a playwright who has written a play about Chekhov and his wife Olga Knipper among others. She knows this material and is not interested in historical revision and colloquialism so much as historical restoration and lyricism.

The first three acts of the play are almost perfect. The final act has a bit of an Achilles’ heel. Most of the scenes work. The one scene that does not work for me is unfortunately the most important scene in the play, in which Nina Mikhailovna returns after two years. With the constant reference to Hamlet throughout the play, this scene is, in my eyes, an analogue for Ophelia’s mad scene. Ms. Tavares here plays it with too much confusion and not enough meltdown for my taste, and the director Mr. Langs misses a grand opportunity for contrast between this madness and Kostya’s “mad” decision to shoot himself.

Nina’s speech is meandering, empty, constantly getting lost; in short it is a type of chaos. Kostya’s final act of suicide is not chaos but the ultimate in orderly resolution. Mr. Simmons here plays Kostya perfectly as he begins to tear up every thing he has written with clinical, deliberate efficiency. But about halfway through he loses his deliberation and tears his papers rather angrily. It strikes me as more effective simply to continue to treat Kostya’s symbolic self-immolation as a ritual till its bitter end rather than allowing it to explode. The banality of Kostya’s final line, “It would be a pity if she were seen in the garden, my mother would be distressed,” would gain even more by the contrast instead of seeming like one of the most heartbreaking non-sequiturs in drama history.

But this is a small quibble. The production is three-quarters pure genius and one-quarter excellence. One can hardly complain about that mixture. The whole production gives me an optimism about the stage that maybe other companies will finally try to make a break from the petrifying effects of “seasons” and “shows” and rediscover what the San Francisco Actors Workshop under Herbert Blau and Jules Irving knew back in the 1950s: the play is the thing, and it is ready when it is ready.

But of course, then I can read the press and lose my optimism quickly. It saddens me that the reviews I have read so far about The Seagull come nowhere near doing the production justice. Most of the reviews out concerning The Seagull Project’s production fix firmly upon the amount of time the cast spent in rehearsal. Seriously, who cares? Only reviewers who cannot be bothered to think about a play and need to fill up column inches by summarizing plot and concentrating on that which is absolutely superficial. On stage all of these things disappear. All that matters is whether or not the interpretation works; method is irrelevant. If these are the alleged “critics” who are responsible for championing sensitive material by new playwrights, my city is going to be in a bad way for a long time.

Life, as Chekhov notes, is a difficult business when it is not a psychological invention. But even when it is a psychological invention, as Chekhov’s plays are, it is still a difficult business. The Seagull Project have undertaken this business earnestly and modestly, yet it pays rich dividends, not only I suspect to their audiences but also to the actors and talent themselves, who will probably go a long stretch of their career before they have such an opportunity to shine.