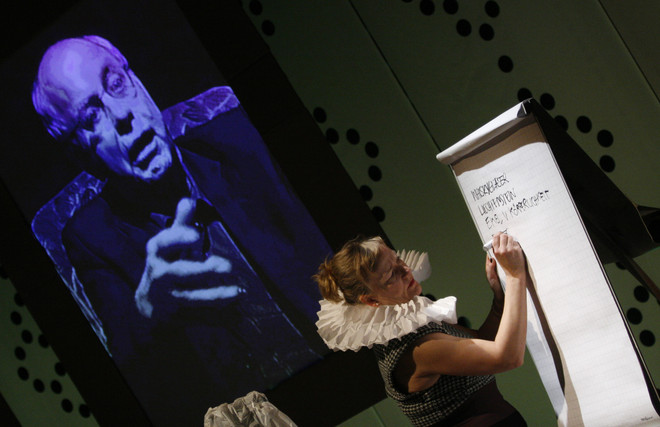 Having already sung the praises of the nature of the programming at On the Boards (an endeavor I am likely to pick up again in the future), let us turn our attention to the organization’s latest offering, She She Pop’s Testament. She She Pop is an experimental theater company from Germany renown for their heavily deconstructionist approach to texts and ideas; with Testament, the group has taken Shakespeare’s King Lear, and focused on interpreting its themes of cross-generational politics at the end of one’s life to the modern day. To further this agenda, the group invited their individual fathers, and included their input in the proceedings.

Looking at it in the abstract, there is nothing revolutionary about this approach: take a classic text, conflate its issues so that it is recognizable to a modern audience, hilarity ensues. Indeed, once you get past the trappings of non-English experimental theater (video cameras visible on stage, strategically hung screens showing what the cameras are aimed at, delineated areas where specific actions take place), there aren’t any overwhelming visuals involved in the presentation—the text being quoted is not phantasmagoric in the way usually associated with this form of theater. Instead, Testament‘s pyrotechnics are far subtler, using a particularly dry German wit as its medium.

An indicator of the sort of wit that awaits the audience comes early, as the ensemble warbles their way through C. Carson Park’s “Something Stupid” (popularized by Frank Sinatra), which couldn’t be a more apt song choice for the love contest that Lear throws at his daughters at the beginning of that play. From here, the group discusses their way through the concerns raised by Shakespeare’s tragedy, incorporating the personalities and proclivities of the troupe’s fathers along the way. Conversations recorded at the time this project began development, which are being reconstituted by the parties on stage, reveal the fathers’ fear of being exploited and lampooned, demanding that their political and emotional views are represented correctly. This veers into a brief discussion on the nature of playing oneself on stage, the sort of meta-commentary that could come off as cloying if handled insincerely.

Later, another father, a physicist by trade, comes up with a mathematical equation that proposes to illustrate a way for Lear to get the maximum enjoyment of his daughters’ love by withholding his largesse for an extended period of time. This is presented at length in an arid, logical manner, not only displaying the father’s intelligence and cleverness, but endearing him and his compatriots to us—just because they are septuagenarians, does not mean they are without their edge, which makes the disaffected rebuke that follows all the more poignant.

A dad corrects a daughter’s literal interpretation of Lear‘s “100 Knights” scene, and passionately argues that it is instead a cry for dignity, only to be told that it isn’t time for that sort of thing. With waves of the parents’ wizened idealism rebuffed by the blunt bourgeois concerns of their offspring, She She Pop slowly reveals the sentimentality at the root of all of the distancing effects their deconstruction brings forth. By the time a daughter is reciting a litany of the things she will have to endure and provide on a daily basis in case her dad moves in with her, while her father sings Dolly Parton’s “I Will Always Love You” not twenty feet away, the emotion evident is pure and unsullied by crass heartstring pulling and manipulation.

Testament‘s success is greatly dependent on one’s willingness to partake in paternal love, warts, idiosyncrasies and all. Those who resist will still find an intellectually stimulating evening, one that directly addresses Lear‘s universal themes in an amusing, if remote, manner. The rest will find unexpected warm comfort in the way the ensemble literally weaves a corporeal tapestry onstage as the lights come down.