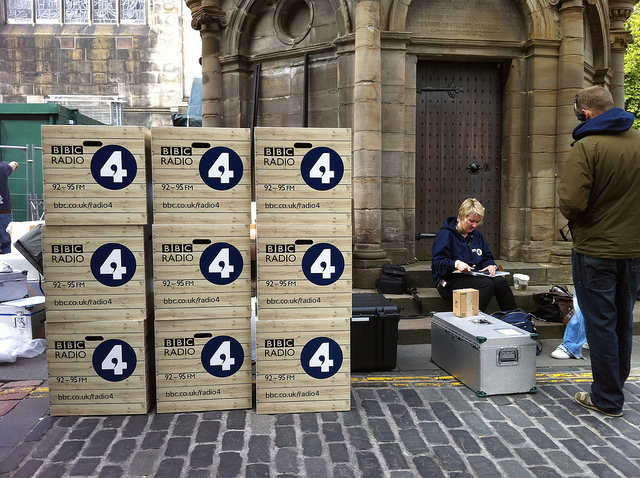 First, the list. Here are your 2013 BBC Audio Drama Award winners by category:

If I were cynical about the state of audio drama, the BBC Audio Drama Awards this year would confirm my cynicism. I place no stock in awards ceremonies, of course; I am well aware that they serve primarily as public relations more than notices of merit. Still, it is depressing to guess all the award winners two weeks ahead of time and be right on all but one–especially when my guesses were based on ancillary matters rather than dramatic honors. Everything about them is so safe, so shockingly predictable.

As I skeptically remarked when the nominees were announced, last year’s awards were backward-looking while this year’s were about the present. Judging from the winners’ list, the present is none too impressive. The BBC nominated quite a few dramas that were adaptations from other sources–even in the Best Audio Drama category beyond the Best Adaptation category. Many of the winners were associated with adaptations: Best Actor, Best Actress, Best Audio Drama (Series or Serial), Best Use of Sound and the obvious Best Adaptation from Another Source. The Imison and Tinniswood awards are given to writers of new material and therefore fall beyond the reach of adaptation, but of the remaining ten categories adaptations account for half of the awards. By contrast, last year no adaptations won any awards except in their eponymous category.

If awards exist to shine a spotlight on what most aggrandizes the people who give awards, the BBC are placing rather a lot of stake in adaptations these days. What sort of message this sends about original material or indeed originality I leave to the readers to draw their own conclusions.

I am not against adaptations. Much of the function of the Third Programme was to bring literature and drama to the radio audience. I believed in that function then and I do now, even in the context of Radio Four, from which most of these award nominees and winners are drawn. I was hugely impressed last year by the adaptation of Mervyn Peake’s Gormenghast trilogy, and Alone in Berlin as well. I am impressed this year by excellent Grapes of Wrath and the superb Lost Honor of Katharina Blum.

As an American, however, I tend to value different things from the stereotypical Radio Four listener. Many adaptations and serials I view as examples of intellectual laziness but moreover I almost always view them as museum pieces that are at odds with contemporary drama. A prime example of the antagonism would be the choice of Betrayal in the same category as Tony Pitts’s On It. Betrayal is a play I love, certainly, but it has been done before on BBC in 1991 and it is thirty five years old. Even more of a museum piece than Betrayal is the other nominee in the category, Zen and the Art of Motorcycle Maintenance, which so reeked of the Seventies to me I felt like I was trapped between three neighbors all playing Frampton Comes Alive on their 8-tracks.

I still go to museums, of course, but I am more interested in galleries that feature new work. My inclinations in audio drama are the same. I have a deep interest in history but at the end of the day I am alive here and now and I need art that deals with my here and now.

On It has at least a living writer and in that sense represents the world of the here and now. But it represents it badly. It sounds largely predictable and trite with a whiff of the topical perfume the BBC loves to spray on its airwaves. Plays like this give me that dreadful feeling I get when I listen to various serials on Woman’s Hour. Addiction, homelessness, teen pregnancy, white slavery, immigration–no problem is too big to winnow down to its most bloodless clichés, declaim loudly its importance, and ultimately reduce it to pure trivia. On It has all these problems, and in trump. The language alternates between Jim Cartwright realism and romantic doggerel. The narrative is often lifeless; compared to something like Trainspotting, it is a featherweight. Yet there it is, winner of Best Audio Drama and proof of the vitality of audio drama in the Twenty-First Century. Because the best we can manage is a semi-topical play that plays to the dumbest prejudices of an over-55 listening audience.

I should like the BBC to consider the mixed nature of such messages. Brilliant productions of museum pieces and facile productions of contemporary drama make a very bad argument that radio is alive. On the contrary, it reaffirms the stereotypical discussions of listeners and non-listeners both that all its glory is in the past. I do not believe this is so, and though I know it is simply an awards ceremony and a ritual of backpatting, I would love for the largest producer of audio drama in the world to believe it, too–and to act as though they do.

As an American one thing I do look for that the BBC takes for granted is leadership. In a country with no centrally organized radio drama production unit that seeks to do something other than repeat OTR clichés, I have to look abroad for any vision about the future of radio drama. While obviously it is not the role of the BBC to cater to my cultural needs as an American–indeed they do much to prevent such needs from ever being fulfilled through their channels–I cannot imagine my British friends find such a cultural turn any more helpful than I do. They too deserve to live in the present: not the sanitary and quite phony present of Tony Pitts, but some richer and more complex present that treats drama and the world in which it exists as something less neat but far more rewarding than the BBC currently values in its awards.