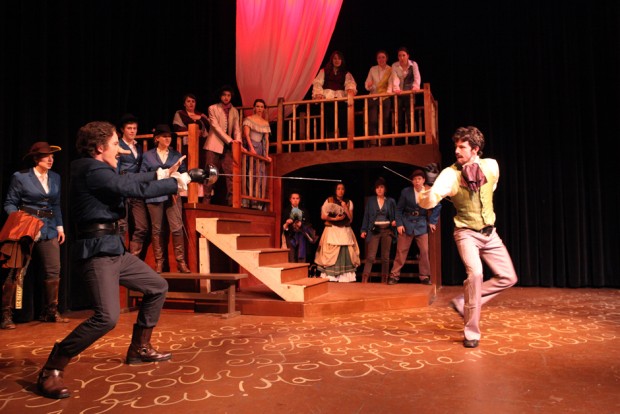 The UW UTS production of Cyrano is rough, crude, unsubtle, and totally lacking in refinement.

And thank goodness, too.

Director Ben Phillips has found the real poetry of Cyrano in this production. It is not a florid, Romantic poetry with its ideas of the tortured genius and all its attendant clichés, but rather a rough, hedonistic poetry more akin the circus. Everything in this production crackles with life. Every gesture is grand. Every tableau is rococo. Every peripeteia is broad enough to border on caricature. In a professional production, such roughness would doubtless be compromised by a faintly patronizing attitude, as if the actors were somehow embarrassed to act so freely.

Mr. Phillips’s actors are not only un-embarrassed, they positively delight in the tone he has set; they are completely committed to the premise. The entire evening feels like a group of friends messing around and reveling in the pure possibilities of play, which, after all, is supposed to be the entire point of the popular theater. As Peter Brook once wrote, “The popular theatre is anti-authoritarian, anti-traditional, anti-pomp, anti-pretence. This is the theatre of noise, and the theatre of noise is the theatre of applause.”

This production is unabashedly noisy. It is immediate as well. The stage is built to draw in the audience. The actors are so close that it always feels they might interact with you and in fact, they occasionally do.

Mr. Phillips keeps a lid on the chaos with an excellent guiding hand. No matter how chaotic the proceedings on stage become, even when there are three or four levels of action, Mr. Phillips guides the audience exactly to where they ought to look, yet understanding that elsewhere life on the stage goes on. His sense of stage picture is remarkable for such a young director, and completely impressive.

What makes this production soar, however, is the fine cast he has assembled. All of them handle Barry Kornhauser’s English verse quite well, without the usual sing-song quality that reeks of high schoolers reading verse from Introduction to British Literature and are quite naturally playful. Even the minor characters of the cadets are quite enjoyable to watch.

Spencer Hamp as Cyrano puts on a fantastic show that anchors the rest of the cast. He delights in the poetry of his role but even more in the swashbuckling abandon of his character. Everything he does on stage seems to work as though it were the only natural way to perform at all: he shows no self-consciousness, and never acts coyly with the audience. This is a larger-than-life performance of a larger-than-life role and the naturally handsome and charismatic Mr. Hamp plays it to the hilt, with the necessary panache.

Sylvia Kowalski as Le Bret is so natural and effortless, one takes no notice of the cross-gender casting. Her scenes with Cyrano in particular have a touching quality that would be lacking between two male actors. If anyone in this cast must be level-headed, it is she and she does so quite well. Her voice is not yet completely developed and sometimes cracks as she projects, but she is young and this is completely forgivable. She acts expressively and well within her role. I look forward to seeing her growth in the future.

Hannah Ruwe, too, is still quite youthful in some ways that detract a bit from her performance in the final act. Her older character is a bit too unformed for me, but again this is a function of age. After one has lived a little, certain qualities appear in the final scene that would not be obvious to a young actor. Having said that, Ms. Ruwe does have a convincing voice for her role, which she plays with a great restraint that actually makes her passion for de Neuvillette and ultimately for Cyrano much more intense.

Other performances are quite good as well. Nathan Wornian in particular manages to bring a certain pathos to his part as Comte de Guiche that adds some dimension to a character that easily turns two-dimensional in the wrong hands. Kevin Lin proves to be a fine comedian with his Ragueneau, as does Kellyn Traenkenschuh with her Duenna, and all of the cadets are immensely enjoyable.

Cyrano is a production that instantly makes me hopeful, not only because of the fine talent on display but also because that talent applies itself so well to the purpose of good old-fashioned muckabout. It is always the popular theater, the rough theater that saves the day, and rescues the theater at large from boredom, morbidity and ultimately obsolescence. Cyrano may not reinvigorate the jaded professionals of the theater but it will certainly invigorate its audiences. The production also offers a glimpse of what might be possible if only one can keep young actors from become jaded professionals. Seattle theater is always in danger of losing the joy and vigor of the rough and ready. If the pros cannot be bothered to keep it alive, at least the amateurs may.