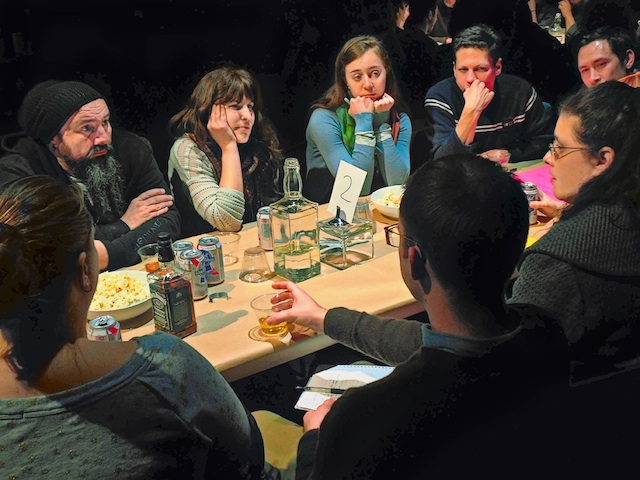 I felt a curious sense of emptiness after Thursday’s Everyone’s a Critic gathering at On the Boards. Having read Andy Horwitz’s thoughts (and Jeremy Barker’s too) on “critical horizontalism,” I had high hopes of seeing this introduced and elaborated. Since the event was to help launch Culturebot’s “Citizen Critic Project,” I expected this project would be delineated clearly with some practical matters and, probably, a bit of speculation and opinion.

Instead, I listened to a half-dozen pre-fab presentations on various topics, intended, according to Culturebot’s website, to “explore Seattle’s and On the Boards’ place in the broader contemporary performing arts world.” Some were interesting. Others were interesting in a bad way. The point of course was not to interest me but to give a public soapbox to some perceived leaders in Seattle’s arts, that they might indicate some themes for further discussion. Some soap was better than others.

My colleague Jose Amador presented his piece on why experimental art matters to the health of performing arts. Approaching it from the perspective of his own personal encounters with work at On the Boards, nominally it was about experimental work. In actuality, I suspect, it was meant to slap the Seattle smug off the faces of audiences and, more especially, Jose’s fellow theater artists. Did it succeed? As a presentation, I think so. As a call that anyone will heed? Probably not. Smugness is, I think, an essential characteristic of Seattle’s artists and audiences. Both groups tend to be insular in the extreme not only aesthetically but also socially. Having written that, I am sure excuses for the behavior will pour in, but the excuses do not change the phenomenon they seek to excuse.

This was also Matthew Richter’s observation, not merely mine. In Mr. Richter’s presentation, he discussed his interest in “art at the crossroads.” The intersections of dance and theater, theater and cinema, visual art and performance art–these have been by far the most fruitful soil for creative performance in Seattle and the rest of the country for the past ten years, certainly, if not longer. Mr. Richter is as deeply interested in these interdisciplinary works as I am. After running Consolidated Works, Storefronts, Room 608, xom and other such hybrid groups, he is well-qualified to speak on the subject. He has gathered together an awful lot of artists from different disciplines over the years, and audiences as well.

My experience confirms this. I have often quoted Herbert Blau’s statement, “What has kept America from creating a significant theater up to now is that our talented people, and they are legion, have never stayed together long enough to do so.” What is true of America at large is true of Seattle. What condemns Seattle’s arts to social irrelevance is that Seattle’s artists have never shown an continuous interest in building a community of artists that, across disciplines, will always help each other, always look out for each other, always fight for each other when the chips are down.

Those chips have been down a long time. And artists have routinely folded.

You may have heard these questions before. They come from Goethe’s Über Kunst und Alterthum. The original may be instructive here:

Productive criticism is a good deal harder. It asks: What did the author set out to do? Is this intention reasonable and sensible? And how did the artist carry out the intention?

Often misunderstood, often misquoted yet still taught in high school classes everywhere, Goethe’s “Three Questions” seem superficially reasonable. They are not. The first question invokes the Intentional Fallacy, which was successfully demolished by W.K. Wimsatt & Monroe Beardsley back in the 1950s. The second question is pure value judgment. “Reasonable and sensible”–by whose standards and to what aim? The only thing that matters is the third question, and the word “work” ought to replace “intention.” H.L. Mencken summarized the problem quite expertly:

This Spingarn-Croce-Carlyle-Goethe theory, of course, throws a heavy burden upon the critic. It presupposes that he is a civilized and tolerant man, hospitable to all intelligible ideas and capable of reading them as he runs. This is a demand that at once rules out nine-tenths of the grown-up sophomores who carry on the business of criticism in America. Their trouble is simply that they lack the intellectual resilience necessary for taking in ideas, and particularly new ideas. The only way they can ingest one is by transforming it into the nearest related formula–usually a harsh and devastating operation.

Given that the discussion specifically concerned work at On the Boards which is all about new ideas, such an approach to criticism is arrogant by definition. Yet Mr. Kiley chants the mantra to his audience and, even worse, teaches this claptrap to teenage students. They would be better served by not asking any questions of the work at all, rather than completely absurd ones like these.

This was the most disappointing presentation of the evening, for which I do not completely blame Mr. Kiley. Andy Horwitz has written that the aim of Culturebot in general and, I think, this panel specifically was “not about reviewing, it is not about what the writer did or didn’t like—it is about information, examination and exegesis; creating context by connecting the work at hand to larger ideas, to historical and aesthetic precedents and to the world in which we live.” Yet Mr. Kiley certainly reviewed, opining what he did and did not like, with the rather specious exordium of Goethe’s Three Questions.

Furthermore, the Culturebot duo have claimed that their further aim is to avoid the odor of the old media and its “imprimatur of legitimacy” as a cultural authority; that they are interested in critical horizontalism instead of how the “traditional critical model proposes a ‘subject/object’ relationship between writer and performance where the critic ‘objectively’ judges the merits of a given performance“–exactly the faults of Mr. Kiley’s presentation. He represented the old model at its most palpably rotten: more interested in judgment than discussion, more functional as a consumer Zagat Guide of performance than a contextual essayist. Why, then, invite him at all? One could just as easily have invited Misha Berson and it would have been just as indicative and just as finally useless.

The duty of “connecting work at hand to larger ideas” was left to the superior mind of a teenager. Olivia Menzer recounted her experience as a teen critic with passion, clarity and generosity that was completely lacking in other presentations. As she talked about the problems of finding the vocabulary to discuss work with which she was unfamiliar, what she truly delivered was a lovely, affectionate argument for art as an experience.

What Ms. Menzer did brilliantly, without even trying, was to undermine her teacher’s dogma. Discussing her encounter with Kyle Loven’s wistful Loss Machine, she told of how she came to the work naively, in the best sense: open and unprejudiced. She saw in the work much that confused her, that she didn’t understand, yet discovered that it still affected her deeply with unforgettable images. Having been taught that it is important to understand and talk deeply about art, she finally concluded that understanding the artist’s “intention” and “getting it” was largely irrelevant to the experience of the art. The experience alone was important for her and understanding it became not something one does at a keyboard between midnight and 2 am while typing up reviews, but rather a continuous journey.

Serge Gart, too, delivered a rhapsodic yet beautiful reminiscence of how he was affected by the work of Pat Graney. Mr. Gart spoke personally and emotionally. One could hardly question the sincerity of his recall or his reasons for being an On the Boards subscriber for numerous years. He continued to be a subscriber for the reasons that matter: because On the Boards offered him strange experiences, sometimes incomplete, sometimes transcendent, and because he has always believed that is what art should do and it is his joy to support such art and share it with the world.

Ms. Menzer and Mr. Gart seemed to me much more akin to the critical horizontalism that Messrs. Horwitz and Barker have in mind. These are people engaging with work, personally, allowing the possibility for growth and change in themselves and therefore in the artists as well. Whatever my problems with the rest of the panelists, the presentations of these two citizen critics offered me some hope. The first section of this evening was, to my mind, problematic in many ways. I awaited the second section to see exactly what would happen.