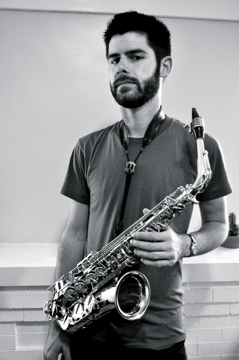 Last weekend’s IMPfest reminded me of something I wrote awkwardly twenty years ago.

As the world shrinks, artistic boundaries, too, are obliterated and influences are commingling. The solution to this problem seems to be an obsession with labeling music. Not by effect or meaning but by clique, so that the music industry may retain their power to tell people what to listen to and how. Special interest micromarketing has become the order of the day. But marketing labels–New Age or World Music or Jazz or Classical–will only ensure the death of music someday.

I had no idea how much worse this problem would get in the Internet Era, where “branding”–you know, that thing we used to apply to cattle–is so narrow-minded that it fragments the audience for new music even worse than it was then.

I thought of this with a wince because so many of the musicians who play in jazz settings also play regularly in settings that are strictly “composed music”–the assumption being that jazz is not composed. In truth, a lot of jazz is through-composed and a lot of “classical” music is heavily improvised. The line between “new music” and “jazz” is not so much fine as it is blurred into near-oblivion.

Likewise, the saxophone as an instrument is so heavily associated with jazz that people forget Adolphe Sax invented it to be played in orchestras and concert bands well before there was a such thing as a jazz idiom. Audience often assume a saxophone player will invariably play in a jazz idiom. And those who are “just not interested in all that noodling” will dismiss artists out of hand on that basis alone.

Evan Smith has trained with some jazz musicians of high renown, such as the UW’s own Michael Brockman. He also performed in the IMPfest with Bill Frisell as well as The Sequoia Ensemble in a jazz context and often moves freely among jazz musicians. He is clearly comfortable in this element, whether on clarinet or saxophone. He has a fine ear, an extensive technique and an exceptional ability to listen and hear what other musicians around him are doing–all of which make him one of the rising stars of Seattle’s jazz scene.

But his program at the Chapel Performance Space at the Good Shepherd Center was anything but jazzy. Here Mr. Smith cultivated his love of contemporary music, particularly contemporary music with a basis in electonic sound.

The program combined internationally respected works and lesser-known American works, with an emphasis on the local. Mr. Smith’s recital began with the noisy The Garden of Love by Dutch composer Jacob ter Veldhuis. One of his boombox pieces, which he composes under the moniker of JacobTV, Mr. ter Veldhuis’s is a kind of dialogue between the solo saxophonist and the ambient world of noise and semi-random found sound–in this case, bird calls. I said that it is noisy but I do not mean that as a slight. Mr. ter Veldhuis has created an ambience invoking the natural world, but the truly lyrical quality of the composition is its very human voice, represented by the machine-made saxophone. It’s an interesting and lovely piece, and a good choice to open the show.

The noted Sonata for Alto Saxophone and Piano by Jindrich Feld followed and it would be difficult to say much about the piece that others haven’t already said better. The piece is, I think, about freedom. Written in 1989-1990 during the Velvet Revolution, Feld and his Czech countrymen faced a suddenly open world in which anything was possible after decades of crushing Soviet rule. Feld translated this new world of possibility into an exploration of the possibilities for what one can actually do on the saxophone. Virtually every technique of the instrument finds its way into the piece. But this is not a mere technical exercise. The piece is also, in a truthful way, downright folksy and Mr. Smith plays it with an elegant, straightforward approach that allows a listener a choice of either admiring the incredible skill on display or simply listening to the various fragmentary melodies in the piece and feeling the subtle changes of mood from joy to a cautious trepidation. Either way works. Andrea Draghicescu makes a fine partner here for Mr. Smith. She is quite sympathetic to Mr. Smith’s playing, and she seems to delight in supplying ideas for him to transform melodically, just as much as he seems to enjoy the reverse. (For an idea of the piece’s structure, not Mr. Smith’s version, but another good version of the last movement of the Feld sonata by Jeffery Kyle Hutchins is below.)

I think I expected something different from Nat Evans’ Two Old Ghosts than the composer was willing to give me. I’ve heard quite of few of Mr. Evans’ pieces before and have found him to be one of Seattle’s brightest young composers. Here I made the mistake of listening to what Mr. Evans himself had to say about the piece. He came up to the stage before the work and, at Mr. Smith’s insistence, offered a brief story about how the piece came to be. Apparently it stemmed from two identical 3 am dreams, one week apart, in which Mr. Evans heard screaming free jazz sax melodies so loud they woke him from his slumber. Each time he woke he heard the same thing: soft rain and a train in the background.

Given that description, I would expect the piece to be alternately loud and gentle. But this is not a loud piece at all. It is delicate. It is so delicate, in fact, that it is almost gossamer at times. Against the background of quiet electronic sounds representing the natural ambience, Mr. Smith’s saxophone plays a restrained series of runs and phrases that never rise to the roar one would expect from Albert Ayler or even Ornette Coleman–both of whom Mr. Evans invokes in his description of the piece. In fact, the title of the piece is probably more accurate than the composer’s own description. The saxophone voice is more ghostly than earthly.

This does not make the work any less powerful. In truth, I like its restraint and suggestive quality. Mr. Evans allows the piece to be eerie rather than horrible–a choice one makes with ghostly matters–and Mr. Smith understands this tone quite well. This is a piece that stays with me and I look forward to hearing it again when Mr. Smith plays it in June.

The world premiere of Jillian Whitaker’s piece, like quicksand, was auspicious. On a certain level it is technically similar to the Feld Sonata: one can certainly hear many possible sounds of the saxophone, though this piece is much more jazz-inflected, I think, than Feld’s. It shares its electronic ambient sound vocabulary with Nat Evans’ Two Old Ghosts and to some extent the JacobTV piece as well. Yet this piece is more modest than both of the other pieces. For that reason it is perfectly successful. The ideas in it are limited but more powerful for their limitations. The melodic ideas are fragmentary, in typical contemporary style, with broken motives and short, dense phrases, yet the relation of the foreground performance and the electronic ambience is quite subtle here. Ms. Whitaker also seems to have a much better sense of humor than the rest. This piece made me smile several times with its wit. Mr. Smith has an obvious sympathy for the work and its composer’s style. It seems to have been written with him in mind, as it plays to all his strengths: a love of non-traditional sound over tonal purity, a strict use of electronic time over which the saxophone plays freely melodic music, and a subtlety of technique that avoids pyrotechnics even when the music is at its most technically difficult. I am still digesting a lot of it and would never pretend that a single listening is sufficient. This is a piece I should like to hear again, multiple times. I am certain it will reward future listening.

The final piece, On and Off, Off and On, closes the show appropriately. It seems to sum up all the other pieces of the evening. This piece was definitely composed for Mr. Smith. It has a subtle humor in it as Ms. Whitaker’s piece does. The electro-acoustic environment is very much the same as Nat Evans’ piece. The subtlety of melodic approach here resembles the JacobTV piece. The love of harmonic interplay present in the Feld piece is also present. Mr. Smith has wisely chosen this pointed work by Anthony Vine to summarize the evening and he takes it on with aplomb. It is possibly the lightest piece in mood of the entire program, but it is equally enjoyable.

Contemporary music group The Box is Empty have been bringing energetic performances like this to Seattle for the past two years. While they have featured world-famous composers like Steve Reich and Louis Andriessen, and less famous but still internationally renowned voices like Michael Gordon the group have always sought to promote local composers as well in their attempt to give audiences a clearer picture of just where contemporary music stands in the early Twenty-First Century. Jazz and international music influences are certainly part of this picture; musicians often play readily in these idioms. The important thing as a listener to remember is that these idioms co-exist and do not compete with each other; rather, they compliment each other in creating a total picture of what our human world today sounds like. If you like Mr. Smith’s jazz work, you are equally likely to enjoy his classical music and vice versa. If you know one and not the other, you should do yourself a favor and change that now. If you do not know either, this is a good chance to change that as well. Evan Smith will likely become one of Seattle’s finest performing musicians. He has the talent and the taste; all he needs is more open-minded support.