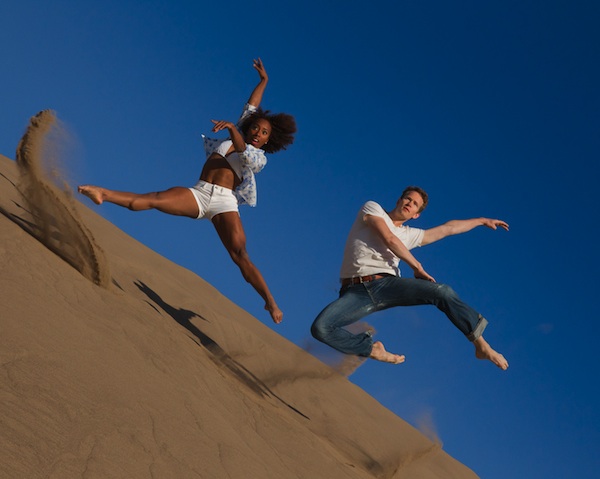 The three pieces Trey McIntyre chose to show Seattle last week at Meany Hall come from rather different phases of the group’s existence. Each shows a different aspect of Mr. McIntyre’s growing skill as a choreographer. When I last saw this troupe in March of 2010, I was struck how much of the work on the program revolved around physical props: Shape, around balloons; Ten Pin Episodes, around bowling pins. Even the final piece Wild Sweet Love was to a great extent bound by its bridal costumes.

With his troupe’s latest program, Mr. McIntyre has returned to a more purely physical approach. Props are minimal. Even costumes are minimal. The abstraction that he pursued in one of the pieces on his latest Seattle program, (serious), has established itself deeper in his style. The three pieces on the new program come from different times of Mr. McIntyre’s career, but the exceptional diversity of style shows bright intimations of the group’s possible future directions.

Queen of the Goths is an early piece. In treating the story of Tamora, the piece uses a contrast between the pop music of the soundtrack and symbolic abstractions of cruelty and violence. The use of color banners and ribbon hearkens to Cantonese Opera and its stylization. The movement itself is not quite so similarly stylized as it remains fairly strictly balletic while playing with the various connotations of “Goth.”

Elizabeth Keller dances with an oddly elegant restraint. Whatever the brutality of the story, Ms. Keller understands that the piece becomes rather more eerie simply by playing it straight and to good effect. Liz Price’s costumes, too, work creatively against the grimness of the plot and strike me as thoughtfully appropriate to Mr. McIntyre’s seriocomic approach.

By contrast Pass, Away is a quite new work that is in many ways the emotional opposite of Queen of the Goths. Here the emphasis is not on restraint but upon expression. It begins quite languidly, appropriate to the mood of Richard Strauss’s lovely “Caecilie” from Vier Lieder, Op. 27, but it quickly bursts into passionate athleticism. On the surface the vocabulary is balletic with all its jetés and pas de chats but this is far from mainstream work. The dancers here throw themselves into moments of pure frenzy. As the piece builds, the desperation in the movement becomes readily palpable before the piece sinks once again into a true reflective quiet toward the end.

The combinations of partnering and use of contact points between dancers strikes me as more Paxton than Balanchine, though not quite so attached to the earth as a standard contact improvisation. Mr. McIntyre’s approach to stage picture, too, shows the extraordinary growth from Queen of the Goths to this piece. Chanel DaSilva and Benjamin Behrends are particularly brilliant with their forceful, almost violent use of space. The final duet between Ashley Werhun and Travis Walker is truly lyrical and lovely and closes the piece as delicately as it opened. It is a very beautiful dance and I hope to see Mr. McIntyre go even further in this direction.

The closing piece of the evening was the celebratory Arrantza, originally commissioned for the 2010 Jaialdi International Basque Cultural Festival in Mr. McIntyre’s adopted home of Boise. Travis Richardson’s moody lighting sets the stage for the dance. The dance explores the theme of fishing (arrantza in Basque) as central to the Basque identity, not merely in the literal sense but also in the metaphoric sense that the displaced Basque population of the United States–and Boise in particular–constantly fish for their identity in the sea of humanity here with no real helpful means of navigation.


But this is not a dour piece. This is a piece about community in the vital sense, about bonding with “strangers” and kin alike. Over the dance sections play four different taped stories of Basque experiences, each touching on this theme, including a heartbreaking story about the drowning of a Greek boy in a neighborhood where few people even spoke the same language. Beyond the text, however, the dance moves from the fairly somber opening into purely ecstatic bliss in the final section–a thoughtful, distinct celebration of the Basque identity, its roots in dance and song, and the beautiful tales they have to tell the world.

This is a group that is growing steadily in confidence and ambition. If Mr. McIntyre can merge his interests in the pure joy of folk dance with the athleticism he prizes in modern dance and his strong grasp of traditional ballet vocabulary, his group may become one of the most important dance companies in the United States. I look forward to watching their next moves.