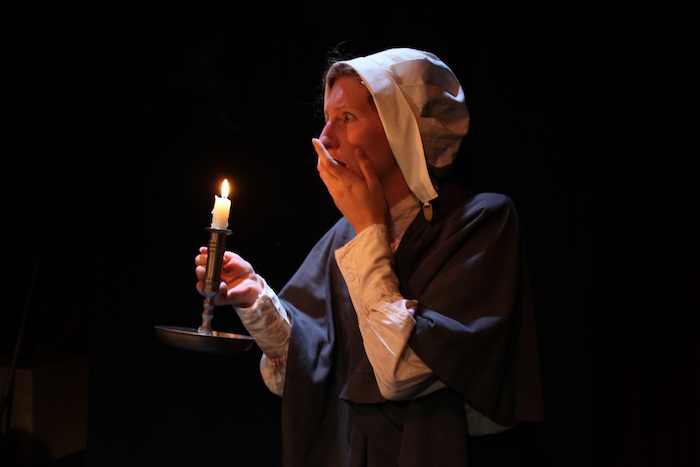 I appreciate most of Jet City Improv’s work. They are probably better known among the laity for their Twisted Flicks and their eclectic short-form pieces, but I have always preferred and continue to prefer their longer works. Final Transmission was, I think, one of the finest plays I’ve seen in Seattle in the past few years and I’ve been waiting for two years for them to do something that powerful again.

Their latest full-length improvisation, Blak Cloud, has that potential. I’ve seen Jet City Improv’s Blak Cloud twice now with two rather different crowds. The first audience was on the small side, and contained some children; the second was about twice as large and mostly college students and adults.

The setup essentially is that the town of Salem, Mass. has decided to start burning witches because it’s the 17th Century AD and such things are very hip and contemporary. One of the characters, Sarah Goode (played by different actresses on different nights, I hear), is accused of two things, taken from audience suggestions. Covering a lovely three-day weekend, the play proceeds in a series of improvised scenes till it ends where it began: in the courtroom with the accused. Each member of the audience has a pair of stones, one white, one black, to vote on whether or not to burn the hapless Goody Goode, and after a cast member collects the lots, the judge pronounces his sentence based on the majority of stones in the basket–white for innocent, black for guilty.

The structure of the work forces the audience not only to participate but to become, in a way, the antagonists of the piece. The cast was slightly different on the two nights I saw but only slightly. The primary difference, it seemed, between the two shows was not in cast or the audience suggestions but in the onstage restraint. Knowing there were children in the audience on the Thursday show, I believe the improvisors choices veered in a different direction. With the larger, more adult crowd, the performance had a more lurid and sexy quality to it. That is not a complaint: the history of witchcraft in Salem is extremely lurid and entwined with female sexuality in unpleasant ways. The restraint on Thursday, however, made the show interesting in a different direction. Choices overall were strong and unpredictable from the protagonist and the supporting cast. The sum of the evening made me deeply uncomfortable, especially sensing that the audience was going to burn the poor girl that I thought innocent (though I’d never burn a witch, anyway, on general principle).

Despite its overall darkness, the piece has a good streak of humor throughout, though it is closer to wit than to comedy. Again, this is far from a bad thing. The cast greatly respects the intelligence of the audience and, too, I think allow themselves a certain amount of slyness in leading the audience along very much like a mob as they mount their case through subtle details.

Most of the cast are well-known on the Wing-It Productions stage, but Molly Arkin is new to me. I’m almost ashamed to admit this, because she shows all the skills of a brilliant improviser, with a remarkable sense of timing and an interesting decision-making process. Her choices are sometimes linear, sometimes non sequitur and yet she manages to make them all seem completely rational. Though she did not play Sarah Goode on the nights I saw the play, I should like very much to see her play the part. I think she would do exceptional things with it.

I was also surprised how very good Katy Nuttman was as Sarah Goode. Ms. Nuttman is also new to me, but she was fascinating to watch in action. She makes intriguing decisions, sometimes decisions that surprise even her cast. If she has any weakness, it is that she has too many ideas rather than too few. Her mind works with visible swiftness and at times she gets a little too swept away; rather than leaving a pause where she has legitimately earned a pause, she occasionally rushes into the next moment. But her moments are always good and often brilliant. Her confidence promises to make her a fabulous addition to the improvising community.

The rest of the cast are exactly as good as I would expect. What is truly lovely about the piece is the showcase it provides for the marvelous women in the cast. I am a huge fan of Laura Turner of course, who is always a joy to watch. On the first night I saw her, she was positively chilling and she seems to get better each time. Elicia Wickstead seems made for period pieces. She has been wonderful before in The Lost Folio and Austen Translation, and her present work matches those equally. Laurel Ryan, too, adds her excellent chemistry to the mix. She is a fantastic listener on stage. Watching her work delights me to no end. And Phill Arensberg, Jon Axell and Mike Murphy were in there somewhere, too.

Blak Cloud rewards an audience that puts into it. It is an interesting experiment in giving the audience a kind of power that the cast usually reserve for themselves. Different audiences with different levels of comfort will provide distinct shows. To my eyes, the experiment is successful. Director Graham Downing’s idea here can provide a multitude of possible shows–and a direction for the future as well. I would like to see even more from him and his marvelous cast.