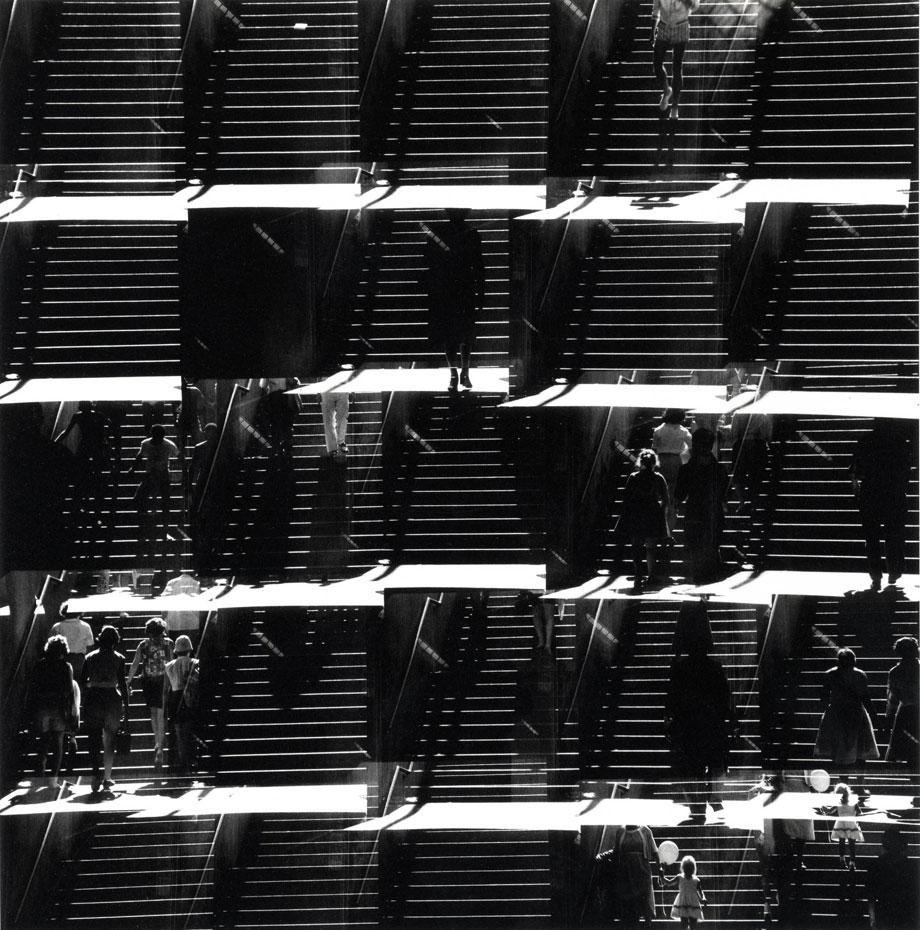 I’ve been writing about Ray K. Metzker’s work for over twenty years. I have by my count written more words about him than any other photographer–a fact which elates me. Seeing his recent exhibition, The Photographs of Ray K. Metzker, come to the Henry Art Gallery made me think backward. I thought I would compare my impressions of Mr. Metzker’s work from a previous time to the most recent exhibit by way of comparing two articles about him, one written in 1998, the other written after viewing the exhibit at the Henry. Part 1 follows. Part 2 will arrive next week.

Isn’t art the need to hold, to make visible, what we believe or wish to believe? The elusive search, the frustration of incompleteness or inadequacy, the failed attempt at seeing, catching, recognizing, knowing something that points and reveals the nature or essence of our being–this attempt is an act by the artists: art is the message of that act.
–Ray Metzker

Even when dealing with serious subjects, American comics rely almost exclusively on basic linear narrative and basic sequential array. This kind of array is as old as the caves, and so is the narrative style. Comics made their formal innovations years ago. Since then, the field has remained rather static. Yet the art of photography–only fifty years older than comics–continues to produce artists who refuse not to be innovative. Using kinds of description, narrative, sequence and array that make comics look naive by comparison, their photographic work continues to push the limits of perception.

Ray Metzker has pushed limits of perception for almost forty years, and shows no signs of stopping. He has worked in the full range of black-and-white photography. He has covered the diapason, from heightened realism to extreme abstraction. He has designed book-style sequences of single images, as well as the amazing arrays of the most recent Composites series. He has done some of the most important photography that deals with the psychology of perception, yet he remains virtually unknown.

Partly this is because Mr. Metzker has no disciples. He does not have students who have modeled their work after his, as Aaron Siskind and Harry Callahan had. He has taught photography only out of financial need, and has not taught at all in many years. Nor does he have the coterie of worshippers that Minor White or Ansel Adams had. Regardless of his lack of status and notoriety, Mr. Metzker has produced beautiful, vital photographs. From his first series, The Loop, through his most recent exhibition When Darkness Reigns, Metzker has shown a truly tireless genius.

As Mr. Metzker once told Anne Wilkes Tucker, his work “deals with the complexity of succession and simultaneity, of collected and related moments.” This is most obvious in his highly elaborate series, Composites, but is noticeable even his subtler monographs, such as Sand Creatures. In contrast to many serial photographers influenced by the photo-essay à la Life magazine, Mr. Metzker does not tell simple stories. His photographic series purposefully avoid traditional narrative and mere description. Instead of narrative, Mr. Metzker prefers analogy. Instead of description, he prefers visual fragmentation. As Metzker said, “You have to break something down in order to have the parts synthesize. If something’s complete, there is no need to synthesize–it’s finished. In journalism the photograph is of an event, whereas in my later work, the photograph is the event.”

The photographic events that Mr. Metzker creates are astonishing. His series, Double Frame, was the beginning of a complex approach to photography. In Double Frame, he began to see the limitations of his former realistic approach. He began to see the limitations of simple printing of a single negative, and began to experiment. Finally, he hit upon the idea of using an overlapped image on the film roll, instead of a single negative. Many of the Double Frame images are uncanny and turn the familiar into the strange, but one that is especially interesting is the untitled image of Philadelphia in which an abstract form of a bridge truss overlaps with a cityscape view. Without using superimposition, the two images together disorient one’s vision. In fact, one of the pictures remains horizontal though the other lies vertically. This photography especially, I think, became the basis for the later work of Composites.

In Spruce Street Boogie, Metzker takes a simple subject and transforms it into a revelation. The photograph reminds a viewer of the liveliness that even simple objects have, but which one often overlooks through complacent familiarity. Using multiple perspectives and superimpositions, the simple pattern of an iron fence and a sidewalk becomes an energetic essay about the rhythm of the street–a true boogie, a visual equivalent of the rhythmic variation in a James P. Johnson or Meade Lux Lewis piano solo.

Because of his elaborate use of experimental photography, some people often label Metzker a formalist, unconcerned with anything beyond mere visual trickery. Spruce Street Boogie is certainly one of Metzker’s most elaborate pictures. But Metzker’s work remains astounding even when simple. In the same series are several pictures without any trickery whatever. Metzker’s photograph of two sailors in Composite: Philadelphia, 1964 is a simple arrangement in a simple grid, that uses only two negatives, one of each sailor. But the variation of light and tonal range differs widely from frame to frame. Some pictures are nearly pitch black and the figure can barely be seen, others are bright to the point of blindness. Even using the simple device of tonal printing, Metzker creates a striking sequence that is every bit as rhythmically interesting as his more elaborate work.

Photography has been a slave to realism since its origins. Much as comics remain bound to linear narrative, photography often remains the thrall of mere representation. Metzker himself started out by doing realistic street photography, very much in the vein of his teacher, Harry Callahan. However, Metzker has never shown any desire merely to reproduce objects or moments. For him, “Unnecessary detail is the death of a lot of photographs. The viewer can see and get involved with every pebble, but the experience is only inventory-taking. No work is left for the imagination.” In contrast to this, Metzker’s street photography eliminates all unnecessary detail. His City Whispers series is a fine example of his approach to realism.

In City Whispers, people often sit, stand and move in areas of extreme light and extreme darkness. Often Metzker will use light to barely illuminate a figure in the darkness, much the way a cinematographer like John Alton would create a film noir. Other times, a group of riders waiting for a bus will stand near an awning and be completely bathed in a square of light, as though they were on a stage. Even in groups, Metzker’s Philadelphians are isolated, remote, sculptural figures.

Metzker’s contemporary critics often decried his “lack of content” even as they noted his impeccable sense of design. But this misses the point. Metzker does not use photography in the service of any given thesis or clichéd moral judgment. Nor is Metzker a mere formal decorator. Metzker’s subject, throughout all his work, is the nature of light. Light holds a symbolic as well as artistic meaning. Nowhere is this more obvious than in his New Mexico series, and his most recent series, When Darkness Reigns. In New Mexico, Metzker had moved from the urban canyons of Philadelphia to the vast barren expanse of light and sand that make up most of New Mexico. Metzker found the staccato, highly manipulated style of his earlier work insufficient. There are no double frames, composites or Couplets here. The New Mexico series returns to presentation of single images in series. There is only the desert with its open, flowing rhythms and intense direct light. In contrast to the darkness of the city, where even a sliver of light from above is significant, the thing that is most significant in New Mexico is the darkness. Instead of a darkroom design, Metzker uses the natural interplay of light and darkness, and the natural repetition of the jejune desert. Overall, light in the series makes even simple forms into abstractions, as in the Albuquerque, 1972 photograph. The darkness seems to define the print. Light is so blinding that it seems almost as though a piece of the picture is missing. Even at his most “realistic,” Metzker’s work tends toward abstraction.

Metzker’s most powerful work, for me, is still his two series of Composites. Though his Couplets may have a more obvious general interest, Metzker’s composite photographs are some of the most striking explorations of seeing in the history of photography. Much of his work remains in a grid-like structure, but Metzker clearly attempts to break out of the grid in several photos, notable especially in Chicago Rain Dance and MGM (short for “Metzker Goes Mad”).

Well before the advent of postmodernist art (whatever the hell that is), Ray Metzker was creating fabulous photographs that responded to all the questions of postmodernism. Perception, representation, collage, assemblage–all these are themes of Metzker’s work from very early on. From his early Chicago series all the way through When Darkness Reigns, Metzker’s work has matured and grown ever more remarkable. His contributions to photography and the entire field of visual art have been immense, and it is well past time he received greater recognition.