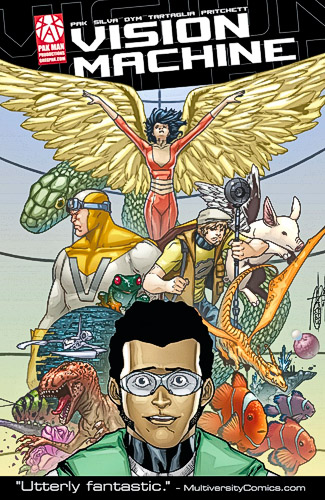 This week we turn to comix. I first saw Greg Pak’s work not in comix but rather in film. In fact I once screened his short, Po Mo Knock Knock, at one of my own Puget Sound Cinema Society meetings about ten years ago. Even then his strange sense of humor and penchant for sci-fi-like mise-en-scene was obvious.

Today he is probably best known for his work on huge corporate properties like Hulk and Action Comics. Two years ago he and artist R.B. Silva won a grant from the Ford Foundation to create a work that speculated on the social impact of technology fifty years in the future. That project became a 84-page graphic novel called Vision Machine.

In Vision Machine, the story concerns a large corporation called Sprout that invents a device called the iEye, a pair of glasses that let you instantly record, edit, and share anything you can see–or, in Jane Tanaka’s case, imagine.

The wrinkle is that anything that can be seen or imagined can also be controlled. Everyone–governments, corporations, rebels–wants to control not only the technology but also how it is used, and even its users themselves. In fact the government and corporations team up to do exactly that, under the humanitarian guise of getting iEye users to log on to a “special” network to track a cute missing child. Each time someone logs on to this special network their information becomes completely traceable, all the way down to whether or not they whistle a copyrighted song or look at a man’s buttocks on the street. Corporations use the information to create target advertisements and governments of course use the information to protect their citizens from terrorism.

Things go from bad to worse as the government employs Jane to smash the alternate worlds that pop up beyond the reach of the government’s central machine–a parable for the open source software movement, certainly. Eventually the iEye’s original designer is fired by Sprout and begins an immense resistance movement that Jane is enlisted to smash. I will let you figure out what happens.

While Mr. Pak is certainly more of a techno-optimist than I am (I tend to fall behind Evegeny Morozov’s rather skeptical view on “technological solutionism”) Vision Machine is a thoughtful exploration of themes dear to my heart: copyright law, creativity as an amoral force, the public domain, free culture and remix. If anything it is too short to tackle all its own implications, but that is probably how it ought to be.

As a gesture of faith in their own vision of the future, the artists have released their graphic novel under a Creative Commons license. They have given away free copies of the printed graphic novel as well, encouraging people to go and cut it up, paste it together, remix it in whatever way they wish. Last year, they even developed an extended version as an app for the iPad that is in many ways more interesting than the graphic novel version, featuring live voices, a music soundtrack and a higher level of interactivity as well.

A remixable version of Vision Machine, with no text is also available. The artists encourage you to remix their work. Downlad it here.