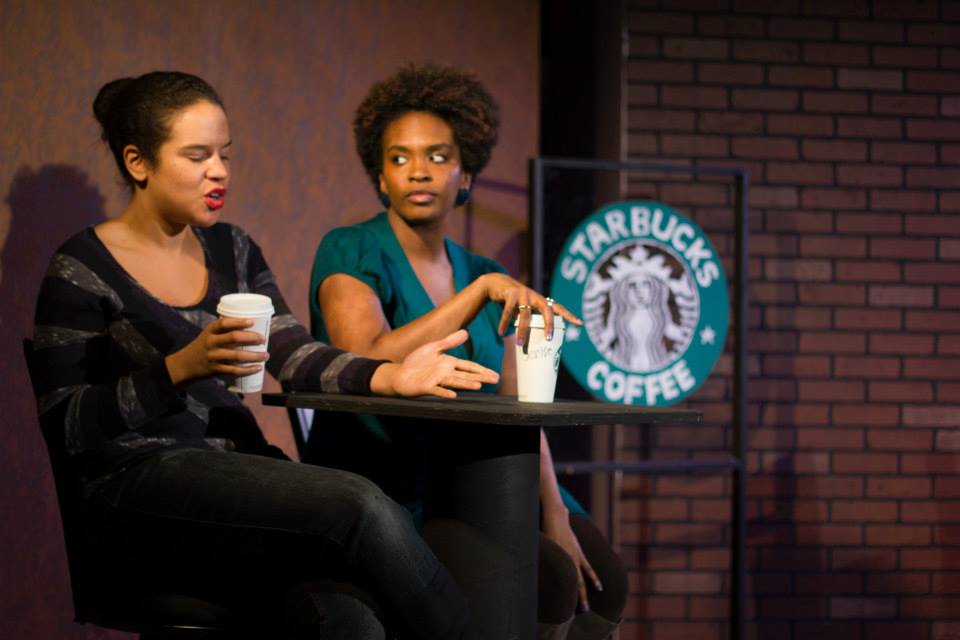 I wasn’t going to write about the Annex Theatre/Brownbox Theatre co-production of Rachel Atkins’ Black Like Us. But the reviews of it and discussion about it I’ve heard so far have been so trite and colorless that duty compels me.

Predictable, but disappointing nonetheless. So let’s start at the beginning.

Seattle is known as a White City in a White State. The population of the city is roughly 70% White, 14% Asian, 8% African 7% Hispanic. So far, so good. No controversy in facts.

Controversy begins the moment one starts to discuss exactly what “White” or “Asian” or “African” or “Hispanic” means. The categories are, after all, results of self-identification. The Census asks me who I am, and I reply: I am “White.” I am “Black.” I am “API.”

But how can you know for sure? Are you as “White” as you think you are? Isn’t your great-grandmother Salish? What about your father’s mother, whose documents were lost back in that 1940s house fire? And your mother–she says she came to America from Europe and she speaks French, but she never talks about her own parents and gets uncomfortable when you talk about Africa…

Do you really know who you are? And do you want to?

That’s the central issue dramatized in Ms. Atkins’ very fine script. Three archetypally geeky suburban white chicks (in the parlance of our times, as the Big Lebowski would say) discover a box with their grandmother’s old photographs proving her to be Black and, by proxy, proving them to be Black as well. One sister wants “to let sleeping dogs lie” and simply go on as if nothing has happened; another wonders how it will help her get ahead in the world by leveraging her minority status into grants and loans; the third simply doesn’t know what to do at all. All three of them are convinced that it changes everything, that their collective history, and therefore their individual identities, are called completely into question.

But are they, really? What is an identity? On a certain level absolutely nothing has changed. The three sisters remain biologically who they were. As Houston Baker wrote:

No matter where you travel,
You still be Black,
You carry all your history
On your own damn back.

But race is not a biological construction. It is a social one. History does not change but knowledge of history does. The question that the playwright dramatizes reflects a larger concern: not “How am I Black?” but rather “What does it mean to be Black?” The playwright offers no single answer here, because the question is more interesting than any single answer, but one thing is clear: what it means to be Black is having to think about being Black. Indeed the very definition of racial privilege is this: not having to think about one’s own racial construction. In the face of the sun and its white light, to blend is to succeed.

Now to the play.

The production has, for me, two noticeable weaknesses. Ms. Atkins handles most things deftly. Her ability to find comedy through the entire piece is excellent. Her eye for characterization and her ear for immediate, intimate dialogue are faultless. I am less convinced about her dialectical sense. Watching the play, it is noticeable in the scenes between Florence and Maxine that passing for white is a Bad Thing. I could hardly thing otherwise because the playwright doesn’t give me the chance. In every scene between the two dealing with the light-skinned Florence passing for white, Maxine the darker-skinned sister is the educated one, the thoughtful one, the one who has all the knowledge about what is right and what is wrong. Nowhere does Florence have even a remotely convincing argument about why her decision is justifiable.

What Ms. Atkins does here is typical among so many playwrights, especially liberals: always put the good arguments in the mouth of the sympathetic character. This is what I call stacking the deck. At its worst, stacking the deck turns a play into a mere “message,” presumably to be delivered and digested by all the self-congratulatory, like-minded white liberals in the Seattle seats. It is not that obnoxious here by any means. Nevertheless, using it at all denies complexity, and denies it here in the play where it most needs to exist.

This problem also creates the second problem, which is partially on the actors and partially on the playwright. Given the stacked deck against her, Chelsea Binta’s character of Florence often comes off like a headstrong yet timid child. There is no sense at all in the production that this character’s values are anything other than self-centered indulgence. But this cuts both ways. With the deck stacked in her favor, Dior Davenport’s character of Maxine comes off as righteous and imperious. That bothers me a little, but what truly bothers me is that there is no sense that the righteousness is actually resentment in disguise, which I think to be far more likely the case than not. In the play’s final scene, in fact, the action that sets everything else into motion is, essentially, that Maxine wants a nice, clean, cold soda that she cannot get without Florence’s help. She knows that Florence enjoys a level of privilege that she does not. How could she possibly not be resentful? Yet this quality is missing largely from Ms. Davenport’s performance, and I think the playwright has to share some of the blame for this.

This is not to suggest that the play sinks because of this. It does not. It remains thoughtful, crisp, and incredibly funny in the best tragicomic way. Ms. Atkins has written an excellent piece that deserves a level of discussion far beyond what Seattle’s white liberal critics seem able to give it. The performances are generally excellent, especially Marquicia Dominguez and Alyson Scadron Branner, and the even tone that José Amador ensures throughout benefits the piece greatly by balancing the serious, the solemn and the silly.

So what’s up with all the superificial and glib commentary about the piece? I think much of this stems from the fact that critics and audiences simply have no idea what to do with the material. After years of minority-cast drivel like Pullman Porter Blues or cozy little homilies like Brokeology littering our stages, Seattleites have come to assume there is little to a play that features African Americans unless it derives immediately from the tradition of minstrelsy and the coon show, or unless it is a “message play” that tidily wraps up all the problems of contemporary society by telling you, yes, racism is bad, bro. Instead, Ms. Atkins has offered an inconclusive play about the inconclusive issue of identity and privilege that is not clearly designed to be “a Black play” and targeted at “a Black audience,” whatever the hell those abstractions mean. They simply cannot think about it (not that they have much experience in thinking about anything else). A theatrical performance about race that is not clearly “targeted” at a minority audience can only vex the small-minded. I’ve written exactly what I think of Seattle’s white liberal critics on this issue, and I won’t recount it here. It continues to disappoint me, but I am growing less and less surprised.

It is, after all, their privilege.