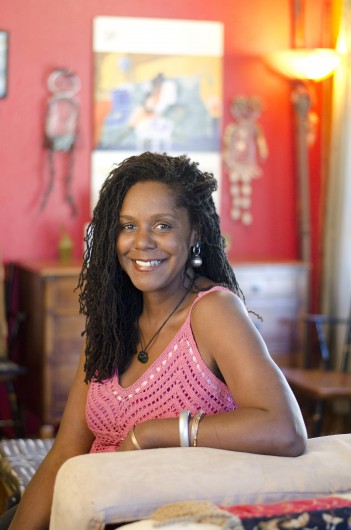 (This post is the latest in the Star series on artistic collaborations, The Finest Worksongs.)

“I miss the theater,” I told Rosalind Bell once, at a workshop about Suzan-Lori Parks. “I miss being in plays, in the community that theater creates….” “Well, the theater misses you,” she replied. “Come back.”

Over the last five or six years, I’ve kept that invitation and admonition in my head. Whether it’s been in a classroom, at the supermarket, or in the middle of her amazing home garden, Rosalind Bell and I have had wonderful conversations about writing, about theater, about literature, about race and social justice. When I moved from teaching to writing, she was one of the very first to applaud this move; she welcomed me to the life of working writers. As a playwright, she’s had three plays produced recently: The New Orleans Monologues, 1620 Bank Street, and Under The Circumstances. I’ve seen the first two plays, and was struck by how much heart, wisdom, humor, and inclusiveness are at the center of her work. But she’s also a director, and I wanted to see how the spirit of collaboration informed her work there. She’s directing this month’s production of August Wilson’s play Joe Turner’s Come and Gone, running at the Broadway Center in Tacoma until February 23rd.

Seattle Star: What has collaboration meant for you and your work?

Rosalind Bell (RB): The solitariness of pen, paper and mind versus the often-time hyper activity of the theatre is mind-blowingly worlds apart. Directing/collaborating means I drag myself from the cocoon of my head where characters frolic, or cry or mock me with their silence to the room where designers and producers express their genius, their desires for the production. Desires I, as director, may not share, but am obligated to work through.

SS: What does it look like in this production of Joe Turner’s Come and Gone [JT]?

RB: Collaboration is at the heart of theatre for me, and with JT that’s especially true.

In this production of JT, [collaboration] looks as though it began with Tacoma’s Broadway Center For The Performing Arts spreading its wings, reaching out to communities of color. It looks like David Fischer asked and listened to voices who wanted a stake, a place in the established downtown art scene. It looks like it was five years of chronologically staged readings of Wilson’s American Cycle wherein the community of theatre goers grew from puny to plenty.

It looks like Jill Carter, a set designer from Olympia, a lighting designer, Mark Thomason from the Broadway Center, a sound designer, Don Cattrel. It looks like the costume designer, Mishka Navarre from the University of Puget Sound Theatre Department, and it looks like Kathryn Philbrook the stage manager, Jackie Roberts (props and set builder), a teacher from Curtis High School in University Place. It looks like six years ago, Bryan Willis of Northwest Playwrights Alliance, in league with the readings they were already doing, became a collaborating partner in this venture, as well as The Washington State History Museum where the staged readings were mostly held.

It looks like The Conversation, a South Sound social justice group, who from the first staged reading signed on as collaborators to sell tickets, ensure a full house for succeeding readings and educate (through workshops) potential audiences about the playwright, the man, August Wilson.

And for me that is where it starts, with August Wilson, the playwright, and his friend, the director, Claude Purdy. What is on the stage now at Broadway Center For The Performing Arts is the gift of collaboration [that] Claude Purdy gave to me from the very first time I entered his rehearsal room (Ma Rainey’s Black Bottom, by August Wilson) at The American Conservatory Theatre in San Francisco, 1986, straight past 20 years and countless miles of working on words that matter.

SS: In your experience, what have been the necessary ingredients for successful collaborations?

RB: A willingness to see a different side, imagine another vision, include rather than exclude. In theatre there is the director whose vision leads the production. That vision of the director’s includes working with the talents and input that form the circle of designers. Disagreements are bound to occur; they have to be worked through.

SS: During the process, what kinds of collaborative pitfalls have you had to avoid or work through?

RB: Ha! What a sneaky follow-through! Just kidding. Surprisingly not many, not many at all. One of the scariest for me was the schedule…or I should say, the break in schedule. We began rehearsing early December and just when we were starting to get somewhere we had a 16 day holiday break! Of course we all knew that was coming…but when it was first put on the table in late October, I balked. Big time. Yes, it worked out. Worked out fine, but if I could have avoided it, I would have. That stretch of time is tricky and hard to lose. The bottom line on that one fell to the Executive Producer, not to me, the director.

SS: Any suggestions for who should I interview next?

RB: First, thank you for thinking of me and second how about Marita Dingus? Not an obvious choice, because she is a visual artist who you’d think does not do collaboration, but every single artist collaborates in some manner. So yes, Marita Dingus! Artiste extraordinaire.