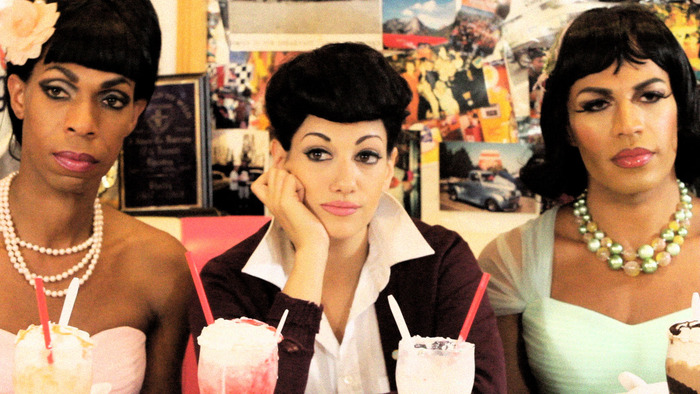 In his review of BOOST Dance Festival’s first weekend, Omar Willey encapsulated the appeal of the festival thusly: “Part of the eclectic approach of BOOST in its two weekends is that it brings youth and experience together. This relationship over the past five years of the festival seems to have been beneficial for both. The youth have gained in their wisdom, so to speak, and the experienced have brushed against the fire of youth; both have improved in the deal.” New to this weekend’s performances will be work from Babette McGeady, Catherine Cabeen, Kaitlyn Dye, Alicia Mullikin, Iyun Harrison, Elia Mrak along with a few of last week’s artists. If you’ve never experienced the breadth of talent to be found within Seattle’s dance community, there isn’t a better way to get an idea of what’s out there.At the Erickson Theater on Capitol Hill.

Leeni is the local chanteuse whose talents are the driving force behind a number of distinct acts — though for our purposes today we’re going to focus solely on Prom Queen, which is hosting a Mad Men Cocktail Party at Vito’s this Saturday in honor of the hit AMC show which begins airing its final season on Sunday. The band’s sound is reminiscent of the moody, saucy, twangy and spare music of the 60s and 70s; think Nancy Sinatra’s My Baby Shot Me Down, or the better examples from a Quentin Tarantino soundtrack. Given the theme, best to dress appropriately, should you go.

Another week, another pair of premiere openings! Leading us off is The Horse in Motion’s world premiere of Attempts on Her Life by Martin Crimp, a production which will take over the University Heights compound as they tell the story of a complex and enigmatic woman in styles ranging from absurdist comedy to impressionistic melodrama. The evening promises to be intense, risky and adventurous for those looking to be stimulated.

Equally promising is SIS Productions’ West Coast premiere of Mia McCullough’s Impenetrable at the West of Lenin. The play revolves around the numerous body image issues raised by a particularly insensitive billboard ad campaign in ways that reviews of previous productions describe as mordantly funny and thought provoking. SIS, one of Seattle’s longest running independent companies, has put together a talented production team headed by unsung director Charlie Waxberg.

Fairly quiet week in the Comedy quadrant, although if you’re looking for sure fire laughs, Charles’ Moby Alpha closes this weekend at the Ballard Underground. Meanwhile, Pocket Theater’s cooking show/stand up comedy mash up The Filling is Mutual takes over the Rendezvous on Friday night.

This week’s potpourri includes April’s edition of Bacon Strip’s dragstravaganza which will take on Disney-tropes in an entry titled Mizz Honey and the Seven Bears.

Then on Wednesday, Family Affair returns to the Rendezvous, with a night benefiting a local actor and her roommate who recently lost all of their belongings in a fire.

Interrobang?! explores post-coital encounters in Post-Bang, the West of Lenin ventures into late night programming with Up Past Bedtime Time. Meanwhile, the Seattle Rep teams up with Balagan Theater for Ernest Shackleton Loves Me, a new musical in which a video game music composer and a time traveling explorer…well, we think that says it all, really — either you’re hooked already or you’re not.