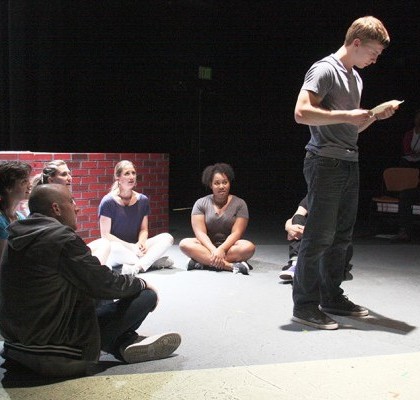 A certain local luminary who is now ensconced in the University of Washington’s PATP program once asked me what I thought about excellence. My answer was direct: Excellence is overrated.

She was shocked. Here I was, a critic of some twenty-six years’ experience, charged with judging excellence day in and day out–or so everyone thought. Yet I was saying that excellence, the holy word of artistic directors everywhere, was unimportant.

It’s time for me to go further. Excellence is not only overrated. In most uses it’s worthless. In others it is deleterious and completely misguided.

The UW Undergraduate Theater Society’s production of Dog Sees God is definitely not excellent. It is rough in the extreme. Bert Royal’s by now infamous tale of Peanuts characters gone bad does no one any favors with its messy script. It’s supposed to be a parody but it’s one of those parodies that sounds far better when you explain it to your buddy, preferably at about two in the morning after a long day as you both giggle yourselves to sleep. The play contains numerous shifts of tone and in its glibness does not offer firm answers about whether or not it is comedy, tragicomedy, or pasquinade. Given the problems of the text and the relative inexperience of the cast, director Michael Joseph Hanley finds himself having bitten off more than he can chew.

Yet chew he does, and his actors chew right along with him. Alexandra Feinberg as CB’s sister gives a consistently fine and pliant performance on the night and so do Michael Monicatti and the exquisite Erica Ream. The rest are somewhat less consistent, sometimes because the text itself founders beneath them. The witty Sean Payne has a very strong physical presence that remains a bit of a blunt instrument. I have no doubt he will gain in subtlety and strength as he adds to his resume. Taigé Kussman has the complementary problem in that she has a fairly subtle vocal mechanism and handles text extremely well, but lacks a certain quality of presence–a strange thing to say about such a beautiful young lady. Dominic Racelis had a slight thinness of voice on the evening, but his timing is impeccable and his characterization of Van is, I think, spot on. Mariama Suwaneh’s performance combines simultaneously the flaws of the people around her and their strengths. She is clearly still growing but shows great promise, especially when she uses her marvelous voice to crisp and comic effect.

Throughout the play, Mr. Hanley wrestles with the script nobly if not handily. Some parts remain confusing. Some parts are flat. A couple scenes have the wrong mood entirely. At the same time, there are many times where things are very good. There are a few times when things are just right. And there are two scenes that are absolutely, truthfully beautiful, including a gorgeous interplay between Cameron Duckett and Erica Ream. It’s Mr. Duckett’s finest scene, where all of his strengths come to the fore and everything else subsides, and he and Ms. Ream clearly bring out the very best in each other.

Those beautiful moments happen because the actors lose their self-consciousness, but also for another reason even more important–namely, that as young actors without a fully-stocked “bag of tricks,” they have no image in their heads of what such a moment “should” look like and so they simply try to find its truth by endeavor and empathy.

By contrast, an experienced director who prides himself on “excellence” would already have in mind an idea of exactly what such moments should look like in an “excellent” production. A veteran actor with a fully-stocked bag of tricks would know exactly what she would do in just such a scene. The roughness would disappear, replaced by a smooth, polished capital-E Excellence.

And there, in clear relief, is the problem with so-called excellence. What people generally mean by excellence is a certain level of predictability. This excellence operates under the guise of technique and craft. More often than not, however, that craft is a series of stereotyped actions and clichés derived from past productions and applied by rote to whatever problem faces an artist, without the slightest concern that they may be quite wrong. Some techniques may be valid in some productions. They may equally destroy productions where they are not. When push comes to shove, such “excellence” ruins students and student productions. It would be far, far better simply to leave them to their own devices and let the chips fall where they may. It is, after all, their time to learn.

Polish, in that vapid way devotees of excellence seem to believe, is not everything. It may even be worse than nothing. Unpolished coins still spend. Too much polish removes their identity–and their value. The same is true of theatrical productions. The UW productions are often at their most interesting when they are roughest. And whatever defenders of excellence may say, interesting trumps all.