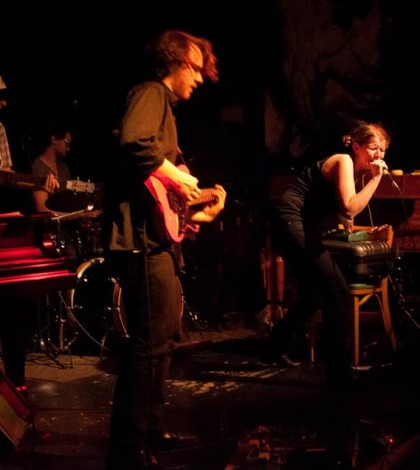 Yet another weekend dominated by a wealth of theatrical choices, however Dance’s offering is quite potent, the town’s improv scene flexes its muscle and while the Music offerings are on the traditional side, there’s at least a wide range of styles on display. Let’s dive in.

Thursday, the Sunset Tavern in Ballard has a fairly eclectic evening in store, as Trimtab is hosting a release party for their album. Helping them do so are the local pop punk outfit Fonzarelli and the experimental groovers Crystal Beth & the Boom Boom Band.

Then on Saturday, The Redwood Plan takes over the Victory Lounge in the Cascade neighborhood (currently known as South Lake Union) headlining an evening that also features Bay area garage duo Steel Cranes and Japanese Game Show out of Kansas.

Locally celebrated dance company Whim W’him is giving patrons a chance to watch them in an even more intimate environment than their usual home at the Seattle Center with #unprotected, which features new work from company founder Olivier Wevers, along with new works choreographed by Annabelle Lopez Ochoa and Andrew Bartee in Capitol Hill’s Erickson Theater.

There’s a whole lot of improv on offer this coming weekend, including a set inside West Seattle’s newest venue, Pershing Hall. KRAM is giving us their game show based KAZOKU!, which combines Japanese game show antics with a family friendly vibe.

Meanwhile, in Ballard, Pocket Theater spends the weekend teaming up numerous improv teams, starting with Buddy UP on Saturday then 3Houses United on Sunday — we’re unsure which improv teams will be teamed up when, but the practice tends to bring out the best in all. Saturday also has dating based 7 Minutes in Heaven and the latest from Interrobang!?, Party of Four, which promises to be more high concept long-form improv from this sharp troupe.

It is a little known bit of trivia that celebrated author Gore Vidal held a three year long correspondence with American domestic terrorist Timothy McVeigh. They developed something of a relationship in the process, the nature of which impressed Vidal in such a way, that he published (yet another) fairly scathing indictment of the US culture (specifically the Media) and the US Government (specifically the FBI) in September 2001, fortuitously enough. Edmund White’s Terre Haute, produced by Bridges Stage Company and being performed at ACT’s Eulalie Theater, imagines what this relationship would have looked like had Vidal met McVeigh instead of just trading letters — whether Haute explores their mutual disdain for their government and why or simply looks at either of these fascinating characters (or simply chickens out of all of the above) remains to be seen.

Also this weekend, the Seattle Public Theater brings us its production of Tom Stoppard’s Arcadia. Written while Stoppard was in top form, and sporting an enviable cast and directed by Kelly Kitchens, Arcadia is simply what happens when the playwright decides he feels like showing off how clever he could be, juggling multiple story threads while playing around with math and time with the same glee he takes to the English language.

It’s been a couple of years since it was last utilized, but it’s heartening to see that the living newspaper — as a theatrical format — is still being utilized in the Seattle region. Granted, the format can lead to many a tangent on stage, but as a means of exploring an issue from multiple angles it is difficult to criticize any attempt to use it, even when there is an editorial bias clearly evident. The folks at the Strawberry Workshop returns to the format with Control: A Living Newspaper which aims to tackle the multi-headed hydra that is the gun control debate — it should be lively.

Arouet, one of the numerous nomadic small companies currently in Seattle, has been slowly but surely gaining a name for itself over the past few years with productions like The Gene Pool and House of Bernarda Alba that, while occasionally uneven in execution, impress with ambition and determination to bring something different to the table. Honestly, when was the last time you saw a production of Lorca in town that wasn’t Blood Wedding? (Oh, and they came so close to nailing it, too.) In any scenario, this weekend they open Joshua Jon’s production of David Ives’ Don Juan in Chicago, a modern retelling of the Spanish lothario’s tale, mixed liberally with the legend of Faust…while setting it in Chicago.

Someone at Taproot Theater has been doing some deep reading and somehow found Diana of Dobson’s in the process. Written at the turn of the 20th Century in Edwardian Britain by one of the country’s first suffragists, the play centers around a common shopworker who inherits a princely sum and decides to live it up at a Swiss resort by posing as a wealthy widow — well above her station, in other words. Hijinks in the form of class conflict ensue, but in witty British fashion and likely with a happier ending than Shaw’s Pygmalion if you’re into that sort of thing.

Last, but certainly not least, we come to 25,000 Posts at West of Lenin, a new solo show written by local actor James Lapan. Part memoir, part training manual for new real estate agents, part rumination on what is billed as a strange decade for the artist — Lapan is a soulful actor who has long been part of the local theater community, this is his first foray into solo performance.

Jennifer Jasper’s Family Affair returns for its May edition and the first of the season’s productions of The Who’s Tommy at Seattle Musical Theater.