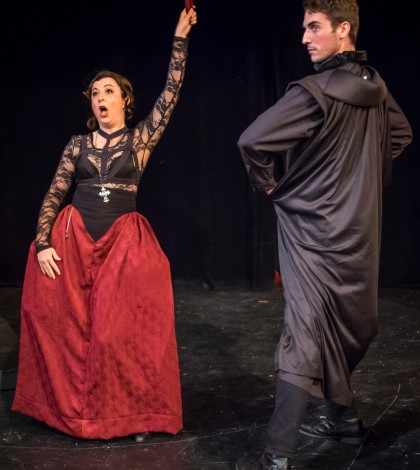 It’s well-known that I have zero sense of humor. I am also not what people call “a sophisticate.”

Given that, I am clearly not the audience for David Ives’ Don Juan in Chicago. I’ve always believed Mr. Ives comes from a long line of playwrights who are so impressed with their own wit as to believe they are the second coming of Shaw. Shaw, however, belonged to the class of “the Shabby Genteel, the Poor Relations, the Gentlemen who are no Gentlemen.” He was an Irishman among Sassenachs, a lower-class outsider writing about the upper class.

Mr. Ives is not. He is a Yale MFA graduate and an insider. He is also one of those echt-American writers who write with a tone that pretends to be “inclusive,” which means to follow up terminally clever verbal acrobatics with a dick joke. Voilà! Instant democracy, yo.

Exempli gratia: a protracted, predictable and pusillanimous scene near the end of the play has Don Juan about to spend his last night on earth if he does not commit incest with his daughter who is celebrating her anniversary with her boyfriend. Since she’s still a virgin–naturally–they go out to a restaurant to discuss sex. The name of the restaurant? The Commendatore, of course. Get it? Like the Commendatore scene in Don Giovanni? Such verbal fire! Such intellect!

I could give many illustrations of such comedic brilliance as this. It features possibly the most obnoxious tendencies of what my conservative friends call, “the upper middlebrow.” As William Deresiewicz expertly puts it:

It stays within the bounds of what we already believe, affirms the enlightened opinions we absorb every day in the quality media, the educated bromides we trade on Facebook. It doesn’t tell us anything we don’t already know, doesn’t seek to disturb our fundamental view of ourselves, or society, or the world.

In the absence of a play I can properly appreciate, I usually turn to the production to make an argument for its merit. Unfortunately director Joshua Jon hasn’t given me one. I am probably wrong, but I think that the appeal of David Ives’ work is that its sophomoric crudity is peppered with enough Noel Coward-esque cleverness to convince people that it really isn’t that bad for them, the way people convince others that it’s still okay to eat at McDonald’s.

To me, then, an effective approach to the play should heighten its crudity while still making the audience feel smugly intelligent because they get all the in-jokes. Alternately, one might choose to play it deadpan straight as a chamber drama (because visually it is exactly that) and allow the crudity to pierce through the veil of proper manners at the most opportune times.

This production lacks a real commitment one direction or the other. The characters are treated directly as commedia dell’arte types, which is reasonable enough: the opera buffa tradition in which Mozart’s Don Giovanni is cast stems from the commedia dell’arte tradition. But commedia depends upon improvisation; in the absence of improvisation it requires an overall feeling of improvisation, and a touch of the burlesque: rough, unsophisticated, scurrilous. This production is not nearly burlesque enough. It positively begs its cast to indulge in the sexuality and anarchy of a panto, but instead is played for psychological realism (!) and seems all-too-knowing, nudge, nudge, wink, wink, say no more.

As a result, the actors often seem lost, unable to make real decisions on how to tie it all together. It remains a collection of “moments” and “scenes” with all the comedic impulse of standing in line for a Quarter Pounder with Cheese™. I spent half the show watching poor Amanda Falcone parade about like the most stereotypical innamorata, all the way down to her grandiose gestures that would politely be called mortadella di bologna–not absurd enough even to be true ham. Yet she was trapped in a setting of just enough “realism” to undo the entire effect. Dylan Smith has it even worse as Don Juan/Faust. His extraordinary charisma seems wasted on this clueless character as he plays it neither like cavalierly like Don Juan nor philosophically like Faust, but instead neurotically like Woody Allen. Of the archetypal characters, only Leporello seems to be remotely truthful, partly because of the deft skill of Zach Sanders, but also because he is a surrogate for audience, forced to watch and wonder what the hell is going on–an attitude with which I am in complete sympathy.

In the modern setting, the actors have it easier because they can simply be themselves. In this milieu, Kate Witt is her usually flawless self and holds together the other performances well enough. But the overall contrast is still too stark for my taste. The period characters have not, according to the tenets of realism, evolved over 400 years, yet they are not consistent archetypes either. I kept reciting Revelation 3:16 to myself.

Don Juan in Chicago is a strange choice for a theater like Arouet, who tend to pride themselves on pieces that are socially conscious, even in their comedies. One would be hard-pressed to find much social exploration in this piece. Instead it remains very much like that fast food the liberal bourgeoisie still consume with delight: despite all rationalizations, it is sentimental, disposable, and contains empty calories.