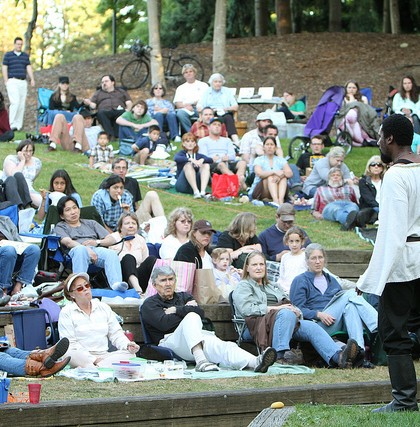 Summer has broken, as Yusuf Islam might have it, which brings about its usual changes: more music is scheduled, dance becomes more celebratory, theater gets more frivolous than usual and comedy…remains comedy. Performances tend to start a little later in the day, the better to exploit late sunsets as the days get hotter and shorter at the same time. With the exception of a handful of artists whose epic visions will not be delayed, it’s all packaged — and often intended — as simple distractions designed to get you to step out of your living room. This weekend is Pride weekend, of course, and there’s the parade, T-Shack
and all sorts of hottentots running around higgledy-piggledy, and there’s also…

There’s a reason Blood Squad is as renown as they are: the unique combination of long-form improv and the rotating brand of horror movies that form the basis of each show. This weekend the group take over Annex Theatre with Carnevil; while the style of horror will be obvious, what won’t be is the way the Squad’s four members will tweak it to wring laughs from the story they create.

Improv is also on display this weekend, this month’s volumes of Buddy UP! (on Saturday) and 7 Minutes in Heaven (on Sunday) take the stage at the Ballard Underground.

The big time nostalgia tours are upon us, with Steve Winwood at Chateau Ste. Michelle, Cher and Cindy Lauper at the Key Arena, Kiss and Def Leppard at the White River Amphitheater, and Devo at the Neptune all arriving in the next seven days. [For the record, TWIP can vouch for Devo and one other act on that list. -ed]

Alternately, the Weimar influenced Love Markets hit the Can Can tonight. For the uninitiated, Weimar was initially associated with cabarets, bawdy, racy, fun time music, and the Markets do a great job of capturing the spirit of the style.

Over in Bellview, Ground Zero is holding its 20th Anniversary celebration over Friday and Saturday, featuring bands like Dreamdecay, Iron Lung, Mei Mei, La Luz, Darto, Bread and Milk, among many others. Admission is ridiculously low considering the number of bands involved, so if you’re looking for fast and loud music, here’s your choice.

Remarkably slow couple of weeks coming up in Theater, though theater in the park season is Marky upon us. Theater Schmeater gets started early with their Who’s Afraid of the Big Bad Wolf? in Volunteer Park. The play is either an adaptation of the classic fairy tale, or it’s a bold new adaptation designed to introduce the classic Edward Albee pay to children. Our money’s on the former, but we’d love to be surprised by the latter.

Finally, we return to the Can Can for an evening of racially diverse cheesecake, as Briq House’s Shuga Shaq returns on Sunday in order to titillate any interested parties after the parade.

Fishbone comes to the Neptune, while Weird and Awesome returns to Annex Theater.