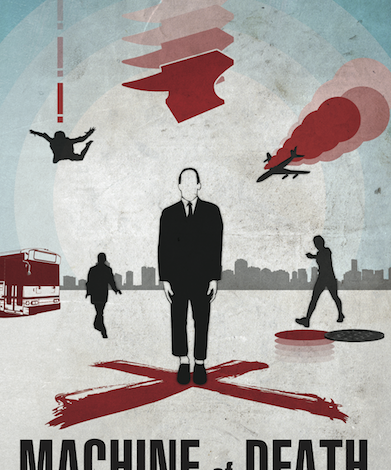 Originally conceived in Ryan North’s Dinosaur Comics, the Machine of Death is an extremely popular idea on which creators around the globe have collaborated. The premise is simple. All of the stories center around a device which reads a person’s blood sample to predict the way a person will die. The machine relays this information by printing a short word or phrase, which serves as the title of each story, on a small card. The machine is never wrong, but its ambiguity is the linchpin of many of the stories within the collection.

The book’s three editors solicited submissions back in 2007 and received well over 700 submissions, many of them from novice and unpublished or unknown writers. Commercial publishers, naturally, were unwilling to risk printing an anthology containing material by so many “untried” authors. (Doubtless the fact that the stories are almost all Creative Commons-licensed was also a factor.) Undeterred, Ryan North, David Malki ! and Matthew Bernnardo self-published the book in late 2010, which then shot to #1 on Amazon’s bestseller list, beating out Glenn Beck, who castigated the authors as promoting a “liberal culture of death.” This from a loudmouth in a mock-military outfit.

The array of talent and the range of stories is quite incredible. Star readers will recognize Erin McKean, Randall Munroe, Jeffrey Brown and Seattle’s own Dylan Meconis, but there is so much more talent here it would be absurd to list them all. Suffice to say, this collection is well worth a look.

The PDF has been available from MachineOfDeath.net for quite sometime. We’re delighted to bring you a non-commercial EPUB version, under the same CC license as the original.