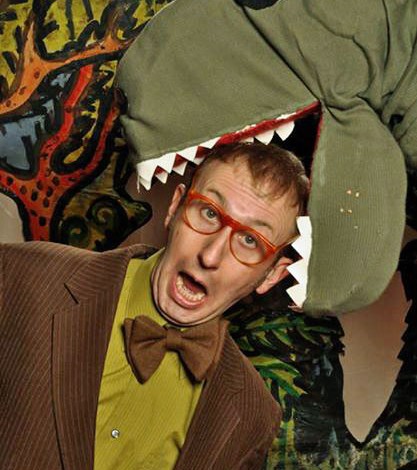 It’s been twenty years since I first saw Paul Mesner’s The Dinosaur Show at the old Phinney Neighborhood Center site. I’ve remained a fan of Mr. Mesner’s work since, but I had completely forgotten how delightful this show is. It wasn’t just me who thought so, either. The two dozen children around me including a birthday girl stayed enraptured for the entire hour. None of them pitched a fit. None of them got bored and decided to run up and down the stairs. Only two of them had to get up to go to the bathroom.

These are details I wouldn’t normally mention in a show that was aimed, allegedly, at adults. Adults are expected to endure boredom. They are expected not to say anything about what’s happening on stage and even more are they expected not to show any particular emotion until they give their gratuitous standing ovation at the end of the evening.

Fortunately children do not have these expectations. Their responses come largely unfiltered by tacit mores and folkways. If you bore them, they will physicalize their boredom. If you tell them something completely implausible, they will laugh at you and say “Nuh-uhhh.” If you talk down to them, they are likely to say, “I know that, silly!” If you are just plain bad, they will say “This sucks!” and go find something else to do. All in all this makes them tough customers.

That Paul Mesner can hold the attentions of dozens of children and a dozen adults simultaneously speaks to his craftsmanship. There were many times where someone shouted “That was cool!” or screamed whenever a thunder lizard would appear or cooed when the baby dinosaurs made their appearance. The Dinosaur Show gives him ample room to show his skill with rod puppets, hand puppets, shadow puppets, full costumerie, and even straightforward prop box comedy at the show’s opening. But more than his expert craftsmanship and his impeccable sense of narrative flow, what really sets Mr. Mesner’s work at a high level is that he respects and honors his audience.

The Dinosaur Show contains some fairly technical language, and some rather poetic language. It contains low-level verbal puns and high-level wit, contemporary cultural references that would be understood by any child, and obscure references that would be difficult to know for anyone younger than 50. Yet at no point does Mr. Mesner slow down to wait for the audience to “get” it. He simply assumes they will understand, and if they don’t they will ask someone who does. All the while the play moves along swiftly, without pausing for effect, and if one cannot pick up everything in a single viewing–well, one can always watch the show again.

It is only in “children’s theater” that an artist can get away with this in this town, it seems, because the “adult theater” is content to patronize its audiences in ways that Mr. Mesner does not. In an adult production if a narrator used the world “conflagration” without immediately explaining it, they would be viewed as “pretentious” or “self-important” by the lunkheads who think they know what people want. Yet there it is in The Dinosaur Show, along with several other poetic uses of polysyllabic language. I surmise that if one questioned Mr. Mesner on whether or not he thought his play was too difficult, he would laugh and ask “Difficult for whom?” His work does not assume that children are stupid and need to be coddled. On the contrary it reveals the utmost respect for them as intelligent beings who can and will bother to listen and learn and enjoy.

And enjoy they do.