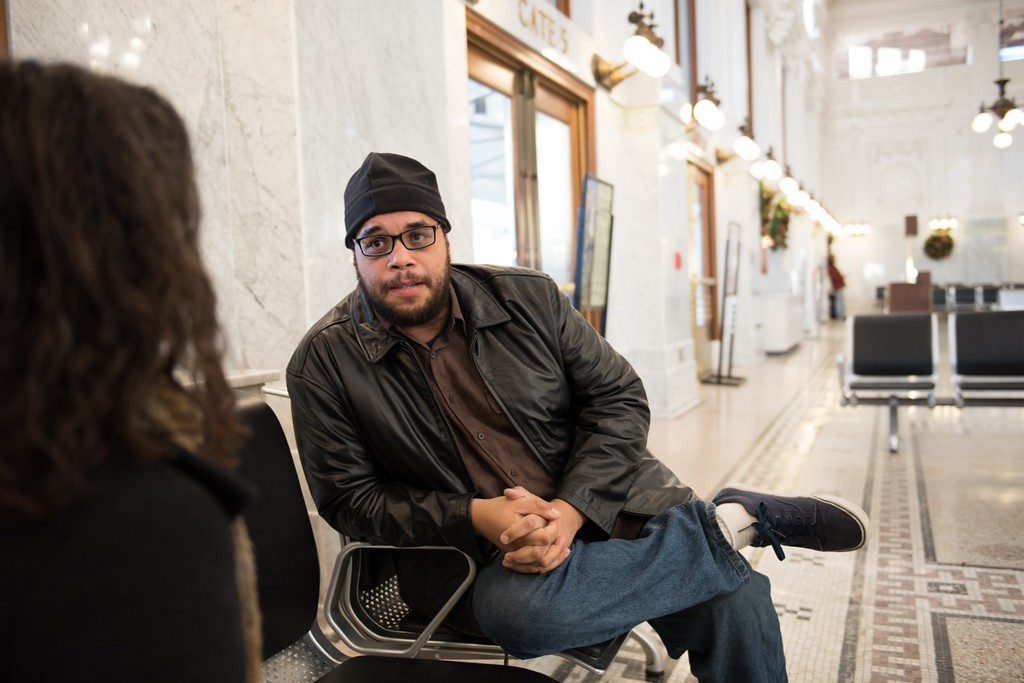 José Amador: Man, fuck Will.I.Am…take the banal track from Dirty Dancing, add the words “dirty bit” and a breakdown: there’s a song. And fuck me, because to this day I find myself enjoying that stupid shit.

Seattle Star: Have you heard this homeboy’s Facebook catastrophe? That one:

Shake it shake it
shake it baby
get butt naked baby

José Amador: I watched all of that with my mouth open.

José Amador: Yeah, that’s hard to fake. That level of it is really hard to fake. It’s been trained and critiqued out of us, I think. You can’t get a song like Fish Heads to break into the consciousness. Some entitled little fuck will go online and say “Fish heads don’t go out to dinner, dude. That’s not realistic.” The comment will get 100 upvotes and then everyone moves on. A lot of great stuff has been lost that way.

José Amador: I’ll be dying to see how.

Seattle Star: So what do you want people to know about your show? Other than that it’s kid-tested, mamacita-approved?

Seattle Star: I’ve seen, like, four different versions of it now. When did you first come up with the idea for the show?

José Amador: It’s the culmination of a lot of work by Mark and I, it’s an effort to present not just a slice of my life but a specific corner of the world. Like with the first solo, A Walk in the Dark, the inspiration came after the initial event took place. I remember taking some scant notes about impressions I had during the short trip to Puerto Rico. And then about four-five months after I sat down to just spew the thoughts from that trip for a group of friends (The Bronze Meese)… That spew is in my blog somewhere. The very bare skeleton of the show can be found there.

I guess the short answer would be the trip to PR is what inspired it.

Seattle Star: One of the challenges you face in Seattle is that there’s a prejudice here that solo pieces are “not theater.” Obviously this is rubbish, but what in particular struck you about the trip that made you think “This is theatrical”?

José Amador: Not just the stories, but the fantastical nature of the stories. Hugely Romantic amid humble settings ending up in humanity. That to me is what the best theater is. The “Fred Astaire of Santurces.” The fate of his wife. This plays into the “not theater” bullshit, doesn’t it? That it’s “just storytelling.”

Seattle Star: I think that’s a discussion theater people aren’t ready to have. Are we to suggest that there is some hierarchy in which “drama” is reserved for the refined, the rich, the white–while “oral cultures” are to be looked down on as “mere” storytellers? This is a prejudice that minorities who come from oral cultures can help to eliminate, I think, but only by actually being considered worthy of discussion as theater.

José Amador: Well, I never bought into the bullshit anyway. As for the show, I can say that I actively nurtured the fantastical in it, the unreal to access the real, to instill a sense of something grander for the audience. I can only hope I succeeded.

Seattle Star: The fashionable way to talk about your piece these days would be in terms of representation.

José Amador: But I’m not. I’m nowhere near a representation of “the average Puerto Rican”.

Seattle Star: Is there even such a thing? If the “average” Puerto Rican were portrayed on a stage, would middle class America recognize her? My experience of hearing Puerto Rico mentioned in the continental US is that it tends to be discussed as a mysterious, exotic place of music, poor people and palm trees. It’s in the most generalized clichés of “Latin America”–whatever that means.

José Amador: So, I guess if I were to put it in terms of “representation” I’m trying to bring/instill a deeper level of understanding to those stereotypes. A sense that those things come from somewhere.

I remember when I was prepping the show for its inaugural run at the Paradise in Chimacum, talking to someone about the show Big Blue Marble. That seemed to have some guiding hand in the contents initially. I loved that show as a kid in Puerto Rico. The theme song gets stuck in my head often.

Seattle Star: Same here. Something about those old public TV shows still strikes me. People are just who they are. There’s no, “Hey, let’s go talk to Maria to see what all Latinas think!” kind of shit that happens now. Maria’s just Maria. Easy Reader is just Easy Reader.

José Amador: In a sense, I think minorities kind of dig their own grave here too.

Seattle Star: Oh, unquestionably. Identity politics has reached such a point that people can’t stop self-identifying, regardless what it excludes. The thing about Big Blue Marble is how straightforward it was in recognizing, “Hey, you’re from somewhere else, and don’t look like me, but this is a shared experience.”

José Amador: That was a huge driving influence in the forming of Hijo.

Seattle Star: Only your show is all about Beigey instead of Bluey.

José Amador: But from an honest angle, not an aggrandizing one.

Seattle Star: Right. Bluey is nothing if not sincere. Beigey oughtta be, too.

Seattle Star: How has working with Mark Fullerton helped shape your perspective on the stories within the piece?

José Amador: Mark brought a lot to the project, so fucking much. Primarily, he served as a whetstone, sharpening the piece and cutting away anything that smacked of “undisciplined artist.” Given what he was looking at when he came on board, which was the story in chronological order, that took some doing. Mark suggested the pursuit of a different structure, and then ensured that the new entity made sense both narratively and artistically.

He also brought his enduring love of John Phillip Sousa, of all things. And rigor.

Seattle Star: Rigor is a great word. The lack of intellectual rigor in local performance stuns me.

José Amador: It’s everywhere. And you can tell when it’s gone missing.

Seattle Star: I think that’s exactly why minorities are having such difficulties with their theatrical productions. Their own stereotyping–of themselves and others–shows the same lack of rigor as the mainstream bourgeois theater. But as minorities we don’t get a pass. We have to be noticeably better. When we’re not, our work plays into other people’s stereotypes, particularly those of middle-class whites, whose limited image of minorities aren’t challenged, but simply reconfirmed, doubly so.

Have you noticed the audience reactions to El Hijo Prodigo have changed depending on your venue?

José Amador: I’d say the confines of New City Theatre’s space made audience more receptive to the piece. We’ll see if that assumption holds with West of Lenin. In general, though, not really–not to a noticeable degree to my ear/eye.

Seattle Star: I’m curious because you haven’t done it at, say, Rainier Valley Cultural Center. All the places I’ve seen it are very much traditional theaters, which any other time, would host more of the same bourgeois theater.

José Amador: That might say more about me than anything else. I am interested in how it would be received in other spaces.

Seattle Star: There’s not a massive Boricua contingent in Seattle, but they are certainly there. Quite a few came to the Annex show.

José Amador: They did. And the reception was enthusiastic in the sense that they saw their homeland represented. I wondered what they thought about the elements beyond that. The narrator is most definitely an outsider in a sense, openly remarking on the things that he could no longer just accept.

Seattle Star: True, but as Boricua themselves no longer in Puerto Rico, that may mirror their own experience to some extent, no?

José Amador: To some extent. But not enough to be remarked upon, it seems. It’s understandable. I’ll take that distance from the artists as respect over having someone tell me what to include in the piece, which happened an awful lot with A Walk in the Dark. There I had both White and Black folks telling me what to say about being mixed race in the US.

Seattle Star: Yeah, that gets back to the whole self-identifying problem.

José Amador: A young female agitator did approach me after an Annex show of El Hijo Prodigo and wanted to know why I didn’t talk more about why people leave the island. She felt that the focus I give to that within the play at the time was too personal, not universal enough. That rang objective enough to consider. I didn’t do much, but I think I’ve planted a suggestion as to why that goes on in the line, “La isla no tiene nada para nadie.” It’s a sentiment I hear a lot. I have a cousin who has said it a few times, too. It’s weird how it manifests itself. That Puerto Rican contingent at the Annex run were primarily Microsoft employees. They came here straight from the island. None were planning on moving back.

Seattle Star: Hard to deal with things like the ridiculous price of housing in Puerto Rico, though, on a stage, in a single show.

José Amador: Price of housing. Lack of career options. No meaningful work to be found. And no real certainty about their place.

Seattle Star: Is it just another Florida? Or is it a wanna be SoCal? Or is it really just Guam?

José Amador: That’s a separate show in and of itself. It had no real purchase in this impressionistic travelogue, though. So, the one line will have to suffice.

Seattle Star: Makes sense. Tough to return once one has left. That’s why leaving is a genuine fear among some of the older folks I know.

José Amador: Y’know, part of me bristles at the notion that Hijo is being ignored because of an implied statement that I should perform it for my people. That’s kind of what’s being said, isn’t it?

Seattle Star: I think that’s very much an issue.

José Amador: Man, fuck that. So now we gotta gentrify the arts? Segregate them?

Seattle Star: It’s another patina for racism. When the theatrical default is white middle-class angsty schmaltz, the assumption follows that only white middle-class angsty schmaltz belongs on the “legitimate” stages. Anything discussing racial minorities belongs, by implication, on illegitimate stages, I suppose. The problem comes in our response as people excluded, which sometimes plays out as “Well, fuck them, I’m gonna just write about me, for myself.”

Seattle Star: Not if the end of the discussion is “Well, who cares if you think my experience is universal or not? You’ll never understand it, anyway!” Some folks have tried to convince me that it was impossible for a white person to understand a black person’s experience at all. But that only suggests that because one can’t have your exact experiences they can’t possibly understand you. I’m not buying it.

José Amador: Only if the white person doesn’t even try.

Seattle Star: Exactly so. The assumption is that they can’t and won’t ever try.

José Amador: We are human beings, for Pete’s sake.

Seattle Star: We know better. We just act like we don’t. Sectarianism isn’t exactly racism of course and neither is anti-Semitism exactly, but those experiences are analogous. It doesn’t have to be exact, just has to be enough to open up an understanding of otherness and an underlying sameness.

José Amador: And back we come to Big Blue Marble, and the idea that laziness permeates the arts.

Seattle Star: The Big Blue Marble will solve all our problems. I feel this in my bones.