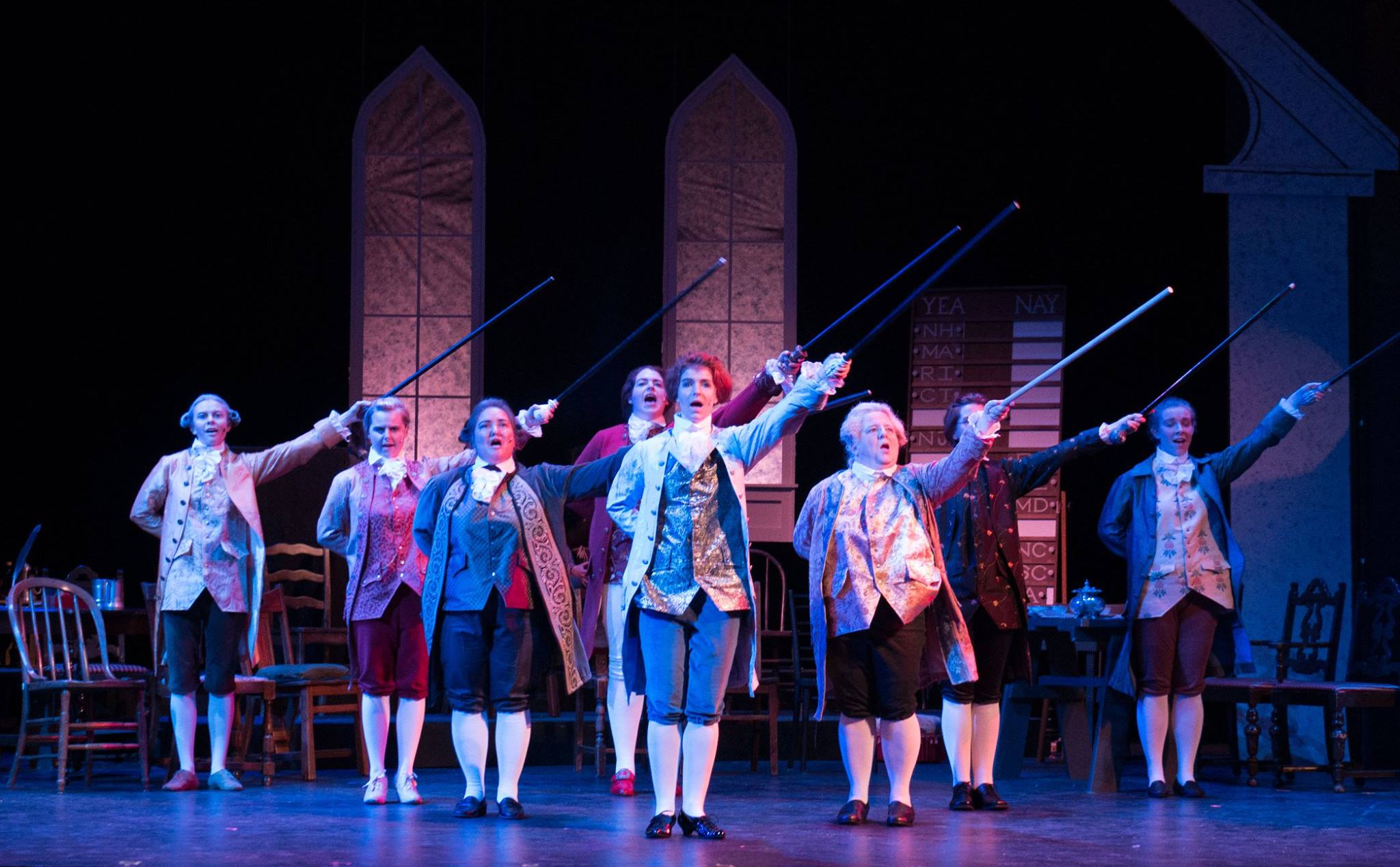 In 1969 when 1776 won the Tony Award for best musical, it was up against–what else?–Hair. Many people saw the ceremony then as now to be a microcosm of America itself: the rebellious, multi-ethnic hippie youth against the long-winded, out of touch white males. Hair was liberal; 1776 was conservative. Hair was groundbreaking; 1776 was reactionary. It’s not that simple, of course: much of Hair is as retro as the mystery plays of the Middle Ages, and 1776 is, formally, a most atypical musical, with long dialogues and few songs. It’s also immediately political and more pointedly critical of The Establishment at times than Hair ever deigns to be in its plotless hippie navel-gazing.

My own take on the dialectic between 1776 and Hair at the Tony Awards would be that it is like a short metanarrative about the 1968 Democratic National Convention–if, of course, I took the Tonys seriously enough to do some sort of cultural “reading” of them (I do not). I do not value awards ceremonies and I rarely value Broadway musicals.

Nevertheless, when I had the chance to go see an all-female production of 1776, I was intrigued. Other than Grease or possibly The Music Man, it is the one musical that evokes for me the experience of community theater musicals so perfectly lampooned in Waiting for Guffman. Yet here was a group of intelligent, talented women wanting to take it on.

An all-female version of a play about the country’s much-touted “founding fathers” was a chance for a group of bright women to rescue the political aspects of 1776 from oblivion and, furthermore, to reconsider them in a new light. Add to this a touch of multi-ethnic casting, with its obvious reverberations against the backdrop of slavery in the piece and there are many reasons to be hopeful about a crisp, revelatory production.

Fortunately hope springs eternal, because the production at Seattle Musical Theatre is not the one. It’s hampered by a string of poor decisions. To use the natural voice or the amplified voice? To play it straight or camp it up? To be static or to be fluid within scenes? To use natural lighting reminiscent of the period or completely artificial stage lighting featuring cool blue tones in the middle of summer? These questions never do receive a definitive answer.

The direction also balks at curious points. 1776 is political–what could be more political than a revolution? The group have already made their “Big Choice” in casting all women. Surely this Big Choice would embolden the group to go even farther on other choices?

It isn’t that Mr. Gehrig & Co. are not adding any political statements, it’s that he’s ashamed of them. The embarassment shows not only in every single decision he makes but also especially in the ones he does not. Rather, it seems that having gone that far toward reconceptualizing the play, Mr. Gehrig is embarassed that someone might actually think he is trying to make a statement. God forbid.

The list of quizzical decisions is long. For instance:

Casting the beautiful Lisa Clarke as Martha Jefferson strikes me as fairly audacious. Surely Mr. Gehrig would take the opportunity to make a commentary on the well-known Jeffersonian relationship with his slave mistress.

Instead, there is nothing in her relationship with Natalie Anne Moe’s Thomas Jefferson onstage to evoke even the barest of sensuality, much less comment on historical fact. Her song is sung in a manner so thin-sounding in the chasm of the SMT space that it disappears into the ether. All innuendo of the song is played as though it were the sweetest thing ever sung and completely without wit.

Then there’s the Lees. Casting the diminutive yet charismatic Meredith Armstrong as loudmouth braggart Richard Henry Lee is a brilliant choice. If ever a number in this musical were made to be belted out so loudly that it hurts the audience to listen, it is overtly sexist “The Lees of Old Virginia”! Surely Mr. Gehrig would take the opportunity to emphasize the phony chivalry of the Colonial South.

Instead when Ms. Armstrong launches into her big number, the microphone is turned down and everything is sung at medium volume. When Ms. Armstrong returns for the reprise and sings “And our women are serene / Full-bosomed, Benji. Every one, a queen,” it is neither bawdy nor cute, but some compromise that’s full of all the charm of a pair of wet sneakers.

Then there’s Rebecca Maiten’s Edward Rutledge. As the delegate from South Carolina–You know, that state where Charleston is? That place where the Civil War started and stuff?–her role cries out for a political touch. A simple yet bold decision like putting a Confederate flag on the delegation table would fit perfectly and go unremarked, and there are numerous anachronisms in the text already, so why not another for a real purpose?

Instead, Ms. Maiten plays her role straight from the beginning and there is nothing in the entire play to suggest that, for instance, anything is wrong at all with South Carolina and therefore North Carolina and therefore Georgia wishing to remain a British colony rather than declare their opposition to the exploitative practices of the British. Even Ms. Maiten’s rendition of “Molasses and Rum” loses all its context and therefore its effect by being reduced to a poorly miked showtune, no more significant to the play or to the history of the USA than a version of “Strange Fruit” played by the Boston Pops.

Remember the director Mr. Gehrig and music director Mark Rabe are adding nothing political. Fine. But without changing anything but emphasis, an astute director could play up the conflict over the slavery clause, which is practically begging to be addressed. There is, after all, an entire song to justify such an interpretation, not to mention 360 years of history. He could address Southern classism and sexism by simply changing two accent marks and a dynamic marking. He could address interracial relationships in Colonial and contemporary America as easily as Ms. Clarke could charm the audience by standing still by having her sing “He Plays the Violin” with just a little less naivete.

I do not mean to suggest it’s all bad. It isn’t. Walker Caplan’s turn as the Courier is brief yet outshines anything else in the show. Mandy Rose Nichols as John Dickinson is completely convincing and dances well. Pat Haines-Ainsworth is amusing enough as Ben Franklin, and Lani Smith is so delightful in her role that I wish she’d had a larger part. Even with the substandard sound on the evening I could tell that Jasmine Joshua and Sarah Walsh have very fine voices that are trying to soar despite their wings being clipped.

The problem with the show is not that it is bad or that it is good. The problem is that it is neither. Is it because it is a co-production of Seattle Musical Theatre, Reboot Theatre and Twelfth Night all at the same time? Are there too many cooks spoiling the broth? I have no idea. All I know is that everything in this production reveals signs of attenuation–I might even say calculation–as if the show were calculated to attract attention through an outrageous gimmick yet had no plan to turn superficial attention into actual interest or probity. This production of 1776 isn’t outrageous–I wish it were. It’s all very middle of the road and, given the potential of the show to be otherwise, quite depressing. And it’s all very, very typical of Seattle.

There’s a passage in Kenneth Turan’s Free for All where Joe Papp, who produced the original version of Hair, is talking about how he came to produce outdoor Shakespeare in the Park. He states quite explicitly his belief in the function of theater:

Most musical producers are not like Joe Papp. They have very little interest in the social aspect of theater. They just want to do a show because they want to do a show and if it’s completely empty of content and statement–no big deal. After all, it’s made for the “musical theater community” anyway, whoever that is. This problem does not belong exclusively to the realm of musical theater. It recurs time and time again in the allegedly serious Seattle theater, too. The skyline of Seattle theater features many shiny, new, tall constructions that prove to be as phony as a Potemkin village, or something from the set of Blazing Saddles.

I do not buy the argument that–hey, it’s musical theater and we should never take it too seriously! Brecht would certainly have disagreed. So would Sondheim. I certainly do. Even in 1969 as Hair and 1776 caught the national imagination, Joe Papp had applied his social conscience to Hair. Without that conscience it would never have hit Broadway. I imagine Papp might have said that he wasn’t interested in musicals but rather interested in the social aspect of musicals, in particular with Hair the theme of the alienation of youth etc.

Would that our musical producers in Seattle had a similar interest. I have seen little evidence that they do.