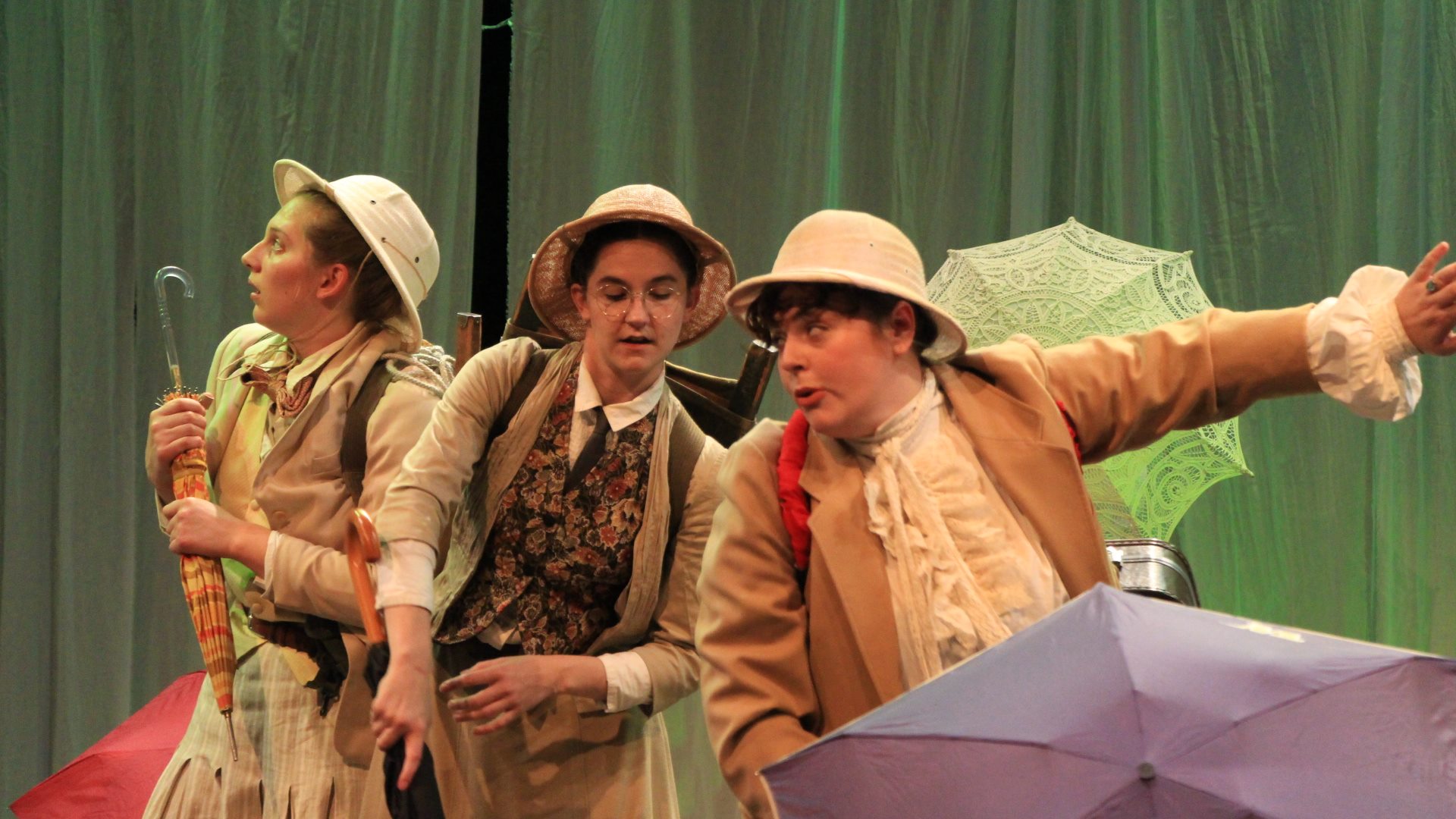 I’ve admired Rosalind Phelps’ work over the past couple of years and decided a long time ago that I’d happily see anything in which she was involved. When I saw she was directing On the Verge as her undergraduate farewell, naturally I was curious.

On a simple level it makes sense. As a director Ms. Phelps has always been drawn to plays with heightened language. She also has a penchant for plays with women who have complex, messy relationships with each other and the world around them. On the Verge has both of those qualities. Furthermore, as a tale of three female explorers in search of Terra Incognita set against a background of women who serve as a modified Greek chorus and a token male character, the play gives all the women of the UTS a chance to strut their stuff.

And strut they do. I am deeply impressed by Kellyn Traenkenschuh this time around, especially with her strong and lovely voice. Of the three leads, Fanny’s character is the most conservative and so having such a strong performance by Ms. Traenkenschuh to anchor the show helps immensely. Ms. Traenkenschuh’s strong handling of the play’s language gives the other actors something they can play against for contrast, which they do well.

Sylvia Kowalski has always been sensitive with her decision-making when she supports other actors around her, and has generally made everyone around her look much better–an excellent quality in a young actor. Seeing her in this role, however, is surprising and delightful. I am particularly taken with her comic sense. Her timing isn’t quite yet impeccable but her obvious joy at messing around and withholding the full force of her wit until it all seems right makes up this. I’d love to see her do more straightforward comedy, as I think she will excel at it.

In many ways, Erica Ream has the hardest role of them all. Mary’s character is restless, relentless, matter-of-fact, progressive yet somehow stiff. She is the woman in the middle. Where Alexandra as played by Ms. Kowalski is a bit on the dopey side of the absent-minded professor type, and Fanny in Ms. Traenkenschuh’s hands is eternally firm, dogmatic, even reactionary, Ms. Ream’s Fanny has to balance everything. She is adventurous yet cautious. She is prim yet finds no problem talking about prurient things. In short, she is the sum of contradictions lived by women in the Gilded Age. I think Ms. Ream does admirably under the circumstances. She moves well. Her characterization of Mary as peacemaker works well enough. Though the language of the play sometimes trips her, I think her vocal approach to the text is very good. She adds wonderful details of business to her character as though they are the most natural things in the world. And of course she has a lovely stage presence.

I think Ms. Phelps’ pacing and blocking are excellent within the constraints of the Cabaret space. I also like the overall design of the piece. Karen Huang, Eloise Perrochet, Isabel Martin, Iris Kuo, Robyn Lautenbacher and Mairin Hackett have collaborated to create an environment in which one’s imagination does most of the work. The stark white costumes of the chorus and the minimalistic set, together with Sam Jones’ lighting, make the three explorers stand out of place even more than they are, as their highly detailed costumes contrast with the overall abstraction. I love this approach, of course.

And yet…something nags at me in this production.

I’ve liked much of Eric Overmyer’s television work. I was a big fan of The Days and Nights of Molly Dodd, which, like most of his work, relies upon sharp, witty dialogue, delicate human interactions, and a keen eye for wit in mundane life. In the wasteland of late 80s television, those qualities were extremely refreshing. He later parlayed the same skill for dialogue and human interest on Homicide and Law & Order, shows whose reputations are quite secure.

His work for the camera tends toward restraint, yet whenever he writes for the stage his work tends toward excess. He abandons the language that he would use in his screenplays for a kind of florid verbiage that sounds like nothing so much as second-rate Tom Stoppard. His usual penchant for subtlety goes out the window, dangling from the high storey by its fingers. His recycling of pop culture quiddities speeds from quaint to quizzical and then, ultimately, to queasy. Everything is overblown, stretched to its rending point then beyond.

On the Verge has these problems in trump. I’d be willing to forgive them if I could just sit back and think, “Hey, it’s a rollercoaster!” But I can’t. Not here. It is a rollercoaster. But it’s a rollercoaster with pretensions. Three women explorers moving forward into the future toward the birth of rock and roll seems straightforward enough. Until you realize that two of them stay there. Why? Well, because boys, of course. And money. And because it’s “comfortable.”

The playwright asks me to accept that two women will settle down and become good little American girls in the 1950s because they finally achieve a sense of belonging in a world that, despite their efforts to carve out a new place for women in the American psychological wilderness, still features men completely in control of their fantasies and values. The intrepid explorers supposedly are drawn in and effectively domesticated. I’m not buying it. These women have spent much of their adult lives traveling the world because it’s there and to go there is the reward of their lives. Why then should I accept that the presence of dashing men in their lives would satisfy their wanderlust? Even Fanny who is already married at the beginning of the play does not seem the type. The explanation given is that she’s missing her husband and apparently needs a man in her life because she is tired and sad. Very touching–and in context utterly bogus. It suggests that Fanny is not so much an explorer as she is a bored housewife and a dilettante.

Yet the way I read it, the whirlpool that Fanny finds so fascinating and comfortable is not merely a bath. It is a seduction. It is an attempt to submerge female wanderlust into the promise of comfort, as if comfort were the goal of life. Alexandra’s seduction via fame and wealth is exactly the same. Only Mary seems to be able to steer between the Scylla of whirlpool baths and the Charybdis of a pop music career and keep to her path.

I’m not suggesting these are not options for women. I am suggesting that even in the 1950s they were not the only ones, and that for these two characters, in this play, to settle for them turns the action of the play toward tragedy instead of light rollercoaster comedy. This is not the tone that Ms. Phelps establishes on stage. I’m not sure any director in the city could establish such a tone. The play spends so much time on the quest that when it shifts into arrival it stultifies. It shifts quickly away from seeking into belonging, making the entire play seem phony.

I’m not against phoniness as such, but if one is going to be phony it’s best not to try to be serious and cheapen the reality beyond the page. The reality remains that women are seduced every day by the same claims toward comfort. This comfort is male-defined and male-controlled. With Mr. Overmyers penchant for language, I’d be surprised if he didn’t know that the word “verge” comes from “rod.” The image is not feminine, but phallic. His explorers are on the verge not only of new lands and new civilizations à la Star Trek. They are on the borderland between masculine and feminine, whatever those words mean. There is nothing particularly feminist about letting men be the reason for anything. Nor is there anything particularly feminist about the claim that giving in to consumer culture is a proper end for one’s life-long quest. That is a verge any sensible female of any era would, I think, avoid.