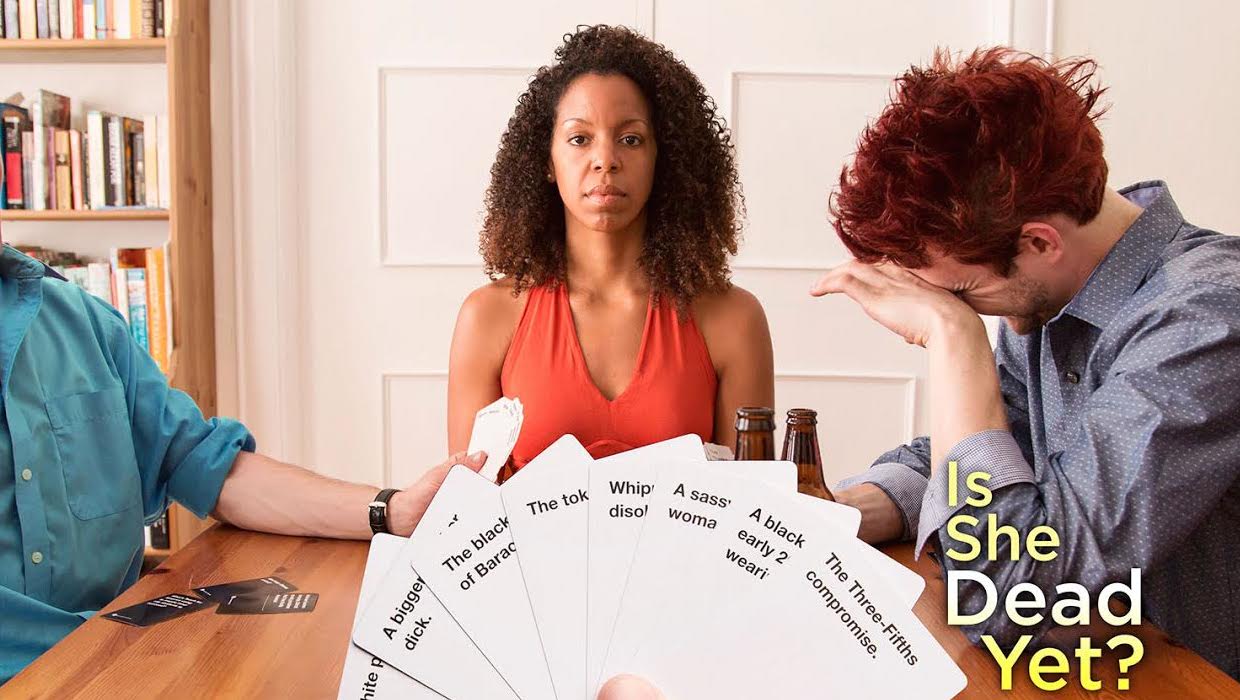 Brandon Simmons’ Is She Dead Yet?, at Annex Theatre through August 22nd, is an exemplary production; as risky as it is vibrant; its themes so necessary as to defy superlatives. Kudos to Annex for having the gumption to schedule it into their season, even if they ignored the classic vaudevillian refrain about heat killing comedy.

Simmons’ script, a modest adaptation of Euripides’ Alcestis, is one of the most intelligent, pointed, and rigorous texts to have been created in recent history. As a satire, it is one of the sharpest, most vicious and most cutting that Seattle has seen in the last fifteen years. Your correspondent could stand to be corrected on this matter. It is difficult to remember the last time something this bracing has been produced in town — anything that comes close (Seattle Shakes’ Threepenny Opera, ACT’s Lieutenant of Inishmore and The Vibrator Play) had been de-clawed or fumbled with by the time they came to production. Annex’s own Bunnies from earlier this year, itself an adaptation of Euripides’ The Bacchae, comes closest, though it deviated from true Greek structure just enough to soften and muddy its impact.

Simmons’ direction ensures that Dead Yet? is not only a jagged pill to swallow, but a hugely entertaining one. His assured hand at the wheel confirms that the play’s impact is wholly by design, which is important for the complicated and difficult discussions the play has inspired and will continue to inspire in the days and years to come. The direction is enhanced by the uniformly strong design elements, each bringing its own wit to match those of the proceedings. This is especially true of the sound design by the Christen Audio Group, which combines modern soundtrack sensibilities with classic Greek and Asian touches as well as the occasional Warner Brother cartoon goosing to great effect.

Just a brief note on the cast before this text begins discussing Dead‘s impact: The cast is breathtakingly pitch perfect, from the most inconsequentially clown-ish through the individual members of the chorus to the main players.

It is beyond refreshing to witness Hannah Victoria Franklin inhabit her characters with such gleeful abandon; it isn’t often she is allowed to display her comedic chops in their proper settings. Alex Matthews as Brad, the sometimes blithely-ignorant/sometimes willfully-so husband of Aretha — the character at the center of the play’s drama — is so on point, it belies the difficulty the character presents. Carol Thompson is a revelation as several characters, stealing scene upon scene with her presence, and delivering a stunning dramatic monologue in the middle of the first act that captures her range in ways that need to be showcased more often. Finally, Yesenia Iglesias as Aretha, Brad’s wife, in a wordless, emotionally intense performance that remains difficult to quantify — yet sublime for all of that and essential for Simmons’ work to succeed. She possesses all of the kind humanity this world has to offer, her actions provide all of her character’s context, her charisma makes her character’s fate all the more tragic.

These performances are all enhanced by the tight control Simmons displays in his direction. Without the cast’s laser-like sharpness, Is She Dead Yet? would simply be a particularly rigorous intellectual exercise, and not the gut wrenching hilarity it truly is.

A few years ago, the Sun Break had asked me to provide an essay in promotion of an upcoming production of El Hijo Prodigo. The topic of the essay was entirely up to me to decide. I decided to talk about the limited scope of characters that had been available to me as a minority actor, and how creating my own solo shows allowed me to flex muscles that had otherwise gone ignored. In one of the ensuing conversations that took place on social media, Simmons had volunteered that he had stopped auditioning for plays that dealt with race — moreover, he wouldn’t take a part in one if it was offered.

I cannot remember his exact reasons why, so I will conjecture, with the caveat that these are my words, not his: Race plays tend to be trite and facile, rare is the play that avoids the many pitfalls. Worse, in my eyes, the playwrights of these plays are celebrated as “profound truth tellers.” The plays generally exist to assuage the guilt of white folks, not confront their complicity in a corrupt system. This is usually achieved by having a villain whose villainy is without nuance, these villains are much too easy to dismiss as not being like the enlightened white member of the audience. These plays generally lean on characters who are more archetypes than people, and are simply vehicles for pure emoting disguised as catharsis. As stated, there are many plays that this could describe, but in recent Seattle theater, two productions come immediately to mind: Seattle Public’s Brokeology and Seattle Rep’s Pullman Porter Blues, one of the worst offenders in the bunch. I can only assume, though I have a strong suspicion, that his views mirror mine to some degree.

Given Simmons’ aversion to the genre, his hand in creating Dead Yet? is puzzling until one reads his note in the program. It reads, “[t]his is a play about whiteness. It is not a play about blackness or black people. This play uses only as much blackness as is strictly necessary to satisfy its own needs.” This represents the only warning Simmons’ gives his audience for what follows onstage, which, as mentioned above, is a full-blooded, mean-spirited, legitimate satire. Satire generally denotes humor, a point of contention in a conversation I had with a fellow critic who felt that the humor in Dead Yet? was non-existent.

The only way one can take Dead Yet? as a comedy is if you accept the truth in Simmons’ note; if you come to terms with the fact that what the play depicts is (some would say “a huge”, others “an unfair”, others still would say “not at all an”) exaggeration of whiteness, in all its gormless ludicrousness. If one has trouble accepting that, then the play will stir up uncomfortable feelings for that audience member. This is by design.

Let’s take a look at the definition of satire out of wikipedia (emphasis mine): “Satire is a genre of literature, and sometimes graphic and performing arts, in which vices, follies, abuses, and shortcomings are held up to ridicule, ideally with the intent of shaming individuals, corporations, government or society itself, into improvement…Although satire is usually meant to be humorous, its greater purpose is often constructive social criticism, using wit to draw attention to both particular and wider issues in society.”

That the play possesses wit is undeniable. In a play where the plot revolves around the mysterious death of the entire Black race, having a career politician say that they have lost the Black vote and then laugh about it is peerless gallows humor. To spoil more jokes along these lines — and friend, there are plenty — is to mar the play’s caustic brilliance. Suffice to say that focusing on whether it is funny is missing the mark, comedy and laughter are too subjective. If the goal of satire is to shame individuals, corporations or society, then it stands to reason that the target of that shaming would not easily find it funny. It’s important to remember that satire doesn’t promise comfort for its target, its nature doesn’t owe such niceties. It doesn’t provide constructive criticism through sympathetic representations, no, it does so using artistically and bluntly truthful ones.

Simmons’ representation begins with his alterations to the source material. The most profound of these is the removal of any context Euripides gives his heroine. Euripides’ Alcestis gives her life to her husband so that her children wouldn’t live without a father, and so that she doesn’t have to learn to live without her husband, who she does love dearly. Simmons’ Aretha — who, in this play, represents his world’s Black race in its entirety — doesn’t get to explain why she’s giving her life to Brad, we’re only given hints when we see her in the after-world. Instead, Aretha serves as a blank slate for the other members of society, all of them White, to project what they think is going on in her mind, or what they want her to be thinking, anyway. I’ll allow you to decide if this has any correlation to our world.

From here, the way the play’s individual artistic representations clearly line up with our reality become astounding: the origins of Brad’s love for Aretha, how the gods of this universe (White people in power) manipulate the lower classes, what the gods think of those beneath them, how those lower classes react when faced with the new reality…even the name of the fictional town holds significance. Even the music selected to get us into intermission, or to end the play, packs a punch.

It’s no wonder some people are bristling uncomfortably, while others are howling in the aisles. That discomfort, however, is a small price to pay for the discussions that the play is inspiring in the community. In a world where #BlackLivesMatter protesters have their humanity questioned by extreme supporters of a political candiate, a world where policemen kill small children holding obvious toy guns without bothering to say “how do”, a world where the next outrage against a person of color is likely happening as you are reading this — in that world, this particular healthy dose of caustic humor is a very welcome thing.